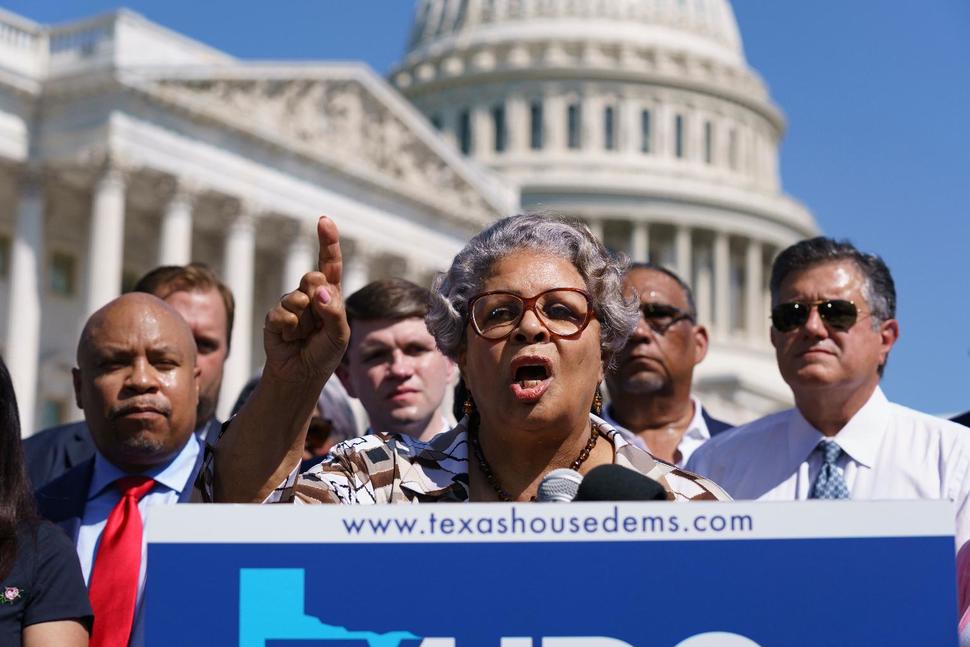 Texas Democrats are starting a second week of holing up in Washington to block new voting laws back home.

Jasmine Crockett, a Black civil rights lawyer and one of the youngest lawmakers in Texas, was just a few months into her first term in the Legislature when Republicans were on the cusp of passing new limits on when and how Texans could vote.

Like other Democrats, she was adamantly opposed to the bill. But when they discussed using extraordinary tactics to try to block it — including a walkout — she sensed hesitancy from older, veteran members who are more accustomed to being the minority party in the state House of Representatives.

“I don’t understand. Why are we sitting here?” Crockett, 40, recalled of the frustration among her younger colleagues. “We’re asking legitimate questions, like, ‘Can’t we leave? What is the problem?’”

When Texas Democrats bolted for Washington in a dramatic gambit to block the bill, it was a significant strategic victory for Crockett and a group of newer Texas lawmakers, including Black and Latino members, whose instincts are more inclined to confrontational politics. If their long-suffering party is to find a way out of the wilderness in Texas, Democrats need to sharpen their message and their elbows, they argue.

“The demographics are there for someone to win Texas right now. I don’t think it can be someone who is completely measured. They have to be loud and outspoken,” said Crockett, who is the only first-term Black legislator in a state Capitol that still is mostly older and white.

As Texas Democrats enter the second week of their holdout on Monday, they are continuing their media blitz with a town hall on cable news and meetings with members of Congress. To run out the clock on the GOP’s sweeping elections bill back home, Democrats must stay out of Texas for 19 more days, at which point Republican Gov. Greg Abbott says he will immediately call another special session to try for a third time to pass the measure.

Nationwide, younger progressives elected to office are pushing a more aggressive strategy within the Democratic Party, most notably in their calls to rewrite Senate rules and do away with the filibuster — it stands in the way of federal voting rights legislation that Texas Democrats say is their best hope of blunting new GOP restrictions back home. A similar dynamic spurred the first dramatic walkout in May, though Texas Democrats remain more unified.

Still, they acknowledge wanting their party to take a harder edge as the GOP implements a far-reaching conservative agenda after President Donald Trump lost his bid for reelection in November.

“They tend to be a little more combative,” said Rice University professor Mark Jones, a political scientist who has scored Texas lawmakers’ partisanship since 2009. “The older style would have been to have worked this out behind the scenes. The younger style is more to make it public and make it more of a protest movement.”

Jones is skeptical that it helps Democrats’ quest to flip America’s biggest red state in the long run.

“It’s inextricably linked Texas Democrats to national Democrats, who are quite unpopular in Texas,” he said.

The demographics of the Texas Legislature haven’t much changed with the arrival of younger Democrats. White candidates in 2018 flipped most of the dozen, mainly suburban seats Democrats picked up in the House, where Republicans have an 83-67 majority.

The scramble to leave Austin under the threat of arrest came as Democrats remain stumped by a riddle they have not cracked in 27 years: how to win a statewide race in Texas. Even now, less than a year before the 2022 primary elections, Democrats still have no candidate for governor. They are waiting for an answer from former congressman Beto O’Rourke, but if he doesn’t run, there is but one other prominent figure flirting with a challenge to Abbott — actor Matthew McConaughey. It’s unclear what, if any, party McConaughey would run under.

In Texas, Democrats are fond of looking to Georgia, where Black leaders and progressives mobilized voters and helped flip one of America’s most reliably red states in November. But Texas Democrats also have a poor track record of prediction, seldom more glaring than last year when massive expectations foundered, including a failure to pick up additional statehouse seats that would have bolstered their chances of stopping or weakening a voting bill.

Instead, the results emboldened Texas Republicans, who came away seeing new opportunity with Latinos. Of the Texas Democrats who stayed behind, several are from districts on the U.S.-Mexico border.

“I would say we are at Georgia five years ago, Arizona five years ago,” said Texas state Rep. James Talarico, 32, who is the youngest House Democrat. “It was young people and young leaders, in particular, that led those states out of the political wilderness. And I think this quorum break perfectly encapsulates this new, fighting spirit.”

Republicans call it a fight that Democrats will inevitably lose.

“For many years there was a distinction, I think, between Texas government and D.C.,” Republican state Rep. Mayes Middleton said. “And unfortunately … this younger side of the caucus is pulling the Texas Legislature more towards the direction of D.C. where you have this division.”

The GOP’s voting bill in Texas would ban 24-hour polling places, prohibit ballot drop boxes and empower partisan poll watchers, moves that Democrats say are designed to suppress and intimidate voters. Republicans are continuing to show up at the state Capitol, even though they can’t pass any laws, calling the bills safeguards that have nothing to do with Trump’s loss to Democrat Joe Biden last year.

But as recently as last week, state Sen. Larry Taylor, the Senate GOP chair, would not acknowledge that Biden rightfully won the election.

“I don’t know that. I hear a lot of discussion about it. There’s been no real investigation on that,” Taylor said while leading a news conference defending the bill.

Trump has falsely claimed that he was robbed of a second term because of massive voter fraud nationwide. In fact, claims of massive fraud have been refuted by numerous judges, state election officials and even Trump’s own administration after the election.

It is those kind of comments that Democrats say justify the extreme measures they are taking to try thwarting the bill. O’Rourke said he has raised more than $600,000 to keep the absent Democrats afloat. They are set to appear in a town hall on MSNBC on Monday.

Texas state Rep. Jessica Gonzalez, who was voting protection director in Nevada during President Barack Obama’s reelection campaign, won her seat in 2018 by challenging a 29-year House incumbent in a primary and itched for harder fights over issues like women’s health and LGBT rights. “I was frustrated, you know, that we were getting attacked,” said the 40-year-old Gonzalez, who is Latina.

Two years later, she was picked as vice chair of the House Elections Committee.

“They’re the ones leading the charge,” said Democratic state Rep. Trey Martinez Fischer, who was first elected in 2000. “They deserve a lot of credit.”