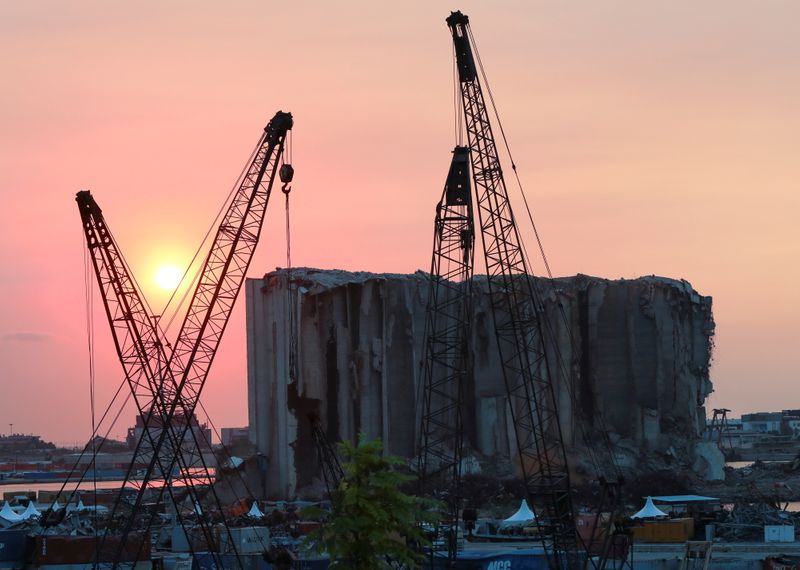 BEIRUT (Reuters) – Growing tension over a judicial probe into last year’s Beirut port blast threatens to push Lebanon into yet another political crisis, testing Prime Minister Najib Mikati’s new government as it struggles to dig the country out of economic collapse.

More than a year since the explosion ripped through Beirut, killing more than 200 people, Judge Tarek Bitar’s efforts to hold senior officials to account for suspected negligence are facing mounting political pushback.

Ministers aligned with the politicians Bitar has sought to question are expected to press the demand for his removal at a cabinet meeting on Wednesday, after the subject disrupted a stormy session on Tuesday.

It is a big distraction that risks undermining Mikati, who took office last month after more than a year of squabbling over cabinet seats as Lebanon sank deeper into one of the world’s worst economic depressions, analysts say.

The row has also underlined the major sway of the heavily armed, Iran-backed Shi’ite group Hezbollah, which has called for Bitar to be replaced, accusing him of conducting a politicised probe picking on certain people.

The most senior politician Bitar has sought to question, former finance minister Ali Hassan Khalil, said all options were open for political escalation when asked during an interview on Tuesday whether some ministers could quit.

Khalil is the right-hand man of Parliament Speaker Nabih Berri – the most senior Shi’ite in the state – and a close Hezbollah ally. Khalil told al-Mayadeen TV the path of the probe threatened to push Lebanon “towards civil strife”.

Hezbollah and its Shi’ite ally Amal have pulled their ministers out of government at times of political conflict, a move that would torpedo the Sunni-led cabinet by stripping it of Shi’ite representation.

Mikati has previously said Lebanon could not bear the loss of a second judge after the first investigator was removed in February when a court accepted a complaint questioning his impartiality.

Mikati’s priority is reviving IMF talks to save Lebanon. But he doesn’t have long, with elections due next spring.

Heiko Wimmen of Crisis Group said the row would “sap energy and it also makes (Mikati) look weak”. “It puts a huge question mark, or adds one, to the doubts that already everyone has concerning the viability of this government.”

Hezbollah was “showing its brute influence and force and that definitely reflects badly on Mikati government”, added Mohanad Hage Ali of the Carnegie Middle East Center.

The government does not have the authority to remove Bitar but could revoke a previous decision that transferred the probe to the judicial council, said Nizar Saghieh, head of the Legal Agenda, a research and advocacy organisation. This would be a major assault on “the separation of powers”.

Foreign states from which Lebanon hopes to secure aid have called for a transparent investigation into the blast, caused by a huge quantity of unsafely stored ammonium nitrate.

The U.S. State Department has accused Hezbollah, which it deems a terrorist organisation, of threatening the judiciary.

All the former officials Bitar has sought to question on suspected negligence deny any wrongdoing. They include Hassan Diab, the prime minister at the time of the blast.

Bitar’s critics say he has breached the constitution by pursuing senior officials against whom any cases should pass through a special process for presidents and ministers.