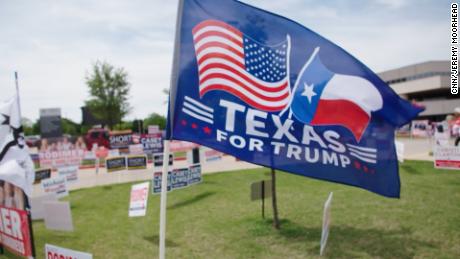 Share
Tweet
Share
Share
Email
Comments
GOP state Rep. Jake Ellzey and Democrat Jana Lynne Sanchez are locked in a tight race for the second spot.
Sanchez advancing would set up a potentially competitive contest and give Democrats a chance to give their narrow House majority a bit more breathing room. Ellzey coming in second would ensure Republicans hold the seat.
The district has been without representation in Congress since February, when GOP Rep. Ron Wright died following a Covid-19 diagnosis.

Susan Wright is Ron Wright’s widow. She received a boost earlier this week when former President Donald Trump endorsed her over the ten other Republicans in the race.
In a statement on Monday, Trump noted she “will be strong on the Border, Crime, Pro-Life, our brave Military and Vets, and will ALWAYS protect your Second Amendment.”
Sanchez, who has worked as a journalist and in communications, was the Democratic candidate for the seat in 2018.
Ellzey is a Navy veteran who lost to Ron Wright in the 2018 primary. He represents a state House district south of Dallas and has had the support of former Texas governor and Energy Secretary Rick Perry.

While Ron Wright was reelected by 9 percentage points in 2020, the 6th District has been trending more Democratic in recent elections. In 2012, Mitt Romney carried the district with a 17-percentage point margin. Trump won it by 12 percentage points in 2016 but by only 3 last year.
Twenty-three candidates from all parties ran on the same ballot in the Saturday contest. Since none of them cleared 50%, the two top candidates will head to a runoff election as required by state law. The date for that election has yet to be scheduled.