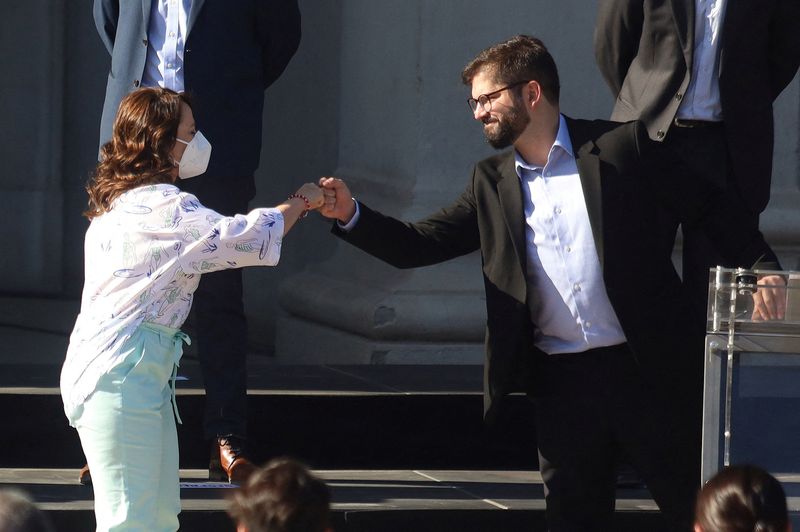 By Natalia A. Ramos Miranda and Fabian Cambero

SANTIAGO (Reuters) – As Chile’s incoming Cabinet stood for photos after being unveiled on Friday one could read in the captured image the changing face of the Andean country.

The line-up was dominated by women – 14 out of 24 ministers – with seven of the Cabinet under the age of 40 and the youngest 32. The average age was 49. President-elect Gabriel Boric https://www.reuters.com/world/americas/student-protest-leader-president-elect-gabriel-boric-caps-rise-chiles-left-2021-12-20 himself, a former student protest leader, will be just 36 when he takes office in March.

“Something has changed,” Juan Gabriel Valdes, a former foreign minister, wrote on Twitter, posting two photos: one of the incoming Cabinet and another from the 1990 all-male government when Chile had just returned to democracy.

But an emphasis on political diversity and fresh ideas shows Chile’s first Millennial leader also wants to stick to his campaign promises to shake things up.

And the make-up of the Cabinet reflects a longer term shift in the role of Chilean women that harks back to former President Michelle Bachelet, who introduced a gender-balanced team in 2006.

“This cabinet is very important for us,” said Karol Cariola, 34, a lawmaker for Chile’s Communist Party, which is allied with Boric’s broad leftist coalition.

“It can reflect not only Chile’s diversity but also the need to progress to a decentralized country, a feminist country, one where we do not have limitations in political participation.”

Some analysts and conservative voters on Twitter said Boric’s young team may struggle, though, given a lack of experience and a divided country, where the election saw an ultra-right rival candidate gain 44% in the second-round vote.

Among the new ministers is Izkia Siches, 35, a prominent doctor who gained plaudits for her role in the country’s COVID-19 pandemic response. She will take the interior minister role, where she will be confronted with voters’ concerns over immigration and crime.

Maya Fernandez Allende, the 50-year-old granddaughter of socialist former President Salvador Allende, who was overthrown in a bloody military coup in the 1970s by General Augusto Pinochet, will take over the defense portfolio.

Marcela Hernando, 61, a centrist lawmaker, will be in charge of the mining sector in the world’s top copper producer, while Maisa Rojas, 49, a well-respected climate scientist, will take over the ministry of environment. Boric has signaled a focus on climate and environmental protection.

At the unveiling of his Cabinet, Boric said that the team would drive reform plans on pensions, education, health and on the environment.

The administration faces significant challenges, however. Boric, Chile’s youngest ever president, will oversee a referendum this year on a new constitution. Chileans angry at an economic model they say has helped the wealthy but left millions with poor-quality education and pensions staged sometimes violent protests in 2019 and may not give him much of a honeymoon.

And he will have to deal with a split Congress where conservatives remain strong.

“One of the great challenges is going to be bringing together all the political forces in parliament,” said Cariola.