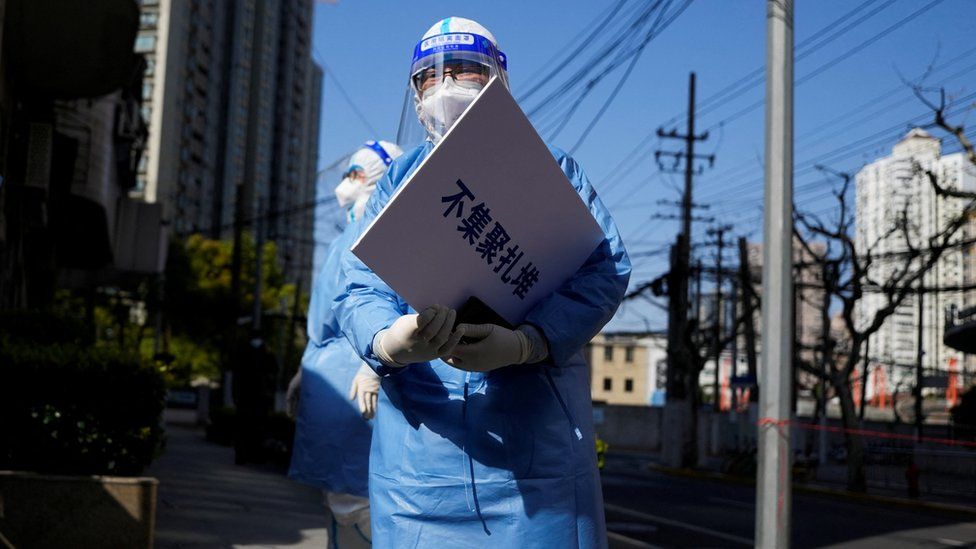 Chinese authorities have extended their lockdown of Shanghai to cover all its 25 million people after a fresh surge in Covid cases.

Initially, there had been separate measures for the eastern and western sides, but the whole city is now subject to indefinite restrictions.

Shanghai is the largest single city to be locked down to date.

The important financial hub has battled a new wave of coronavirus infections for more than a month.

Reported cases have risen to more than 13,000 a day, although the numbers are not high by some international standards.

Residents in some areas of the city said the strict policy meant no-one was allowed to leave their housing compounds, not even to collect essential provisions.

They reported difficulties in ordering food and water online, with restrictions on when customers are able to place their orders, because of a shortage of supplies and delivery staff.

This country’s “zero-Covid” system is, at best, struggling to cope.

China has done Covid lockdowns before, but not on the scale of its financial mega-city.

The logistical challenges required to confine 25 million people to their homes, while keeping them fed, are huge.

Social media here is full of angry residents complaining that they can’t order food because the delivery system is clogged up.

Centralised isolation facilities – many using only camp beds, with no showers or other facilities – are bursting with infected people squashed in next to one another.

One of China’s few reliable media outlets, Caixin, has reported that close contacts of infected people will be moved to neighbouring provinces. This could potentially involve hundreds of thousands of Shanghai residents.

The Chinese government’s complete elimination strategy has become something of a mantra, with the government ridiculing other countries for sacrificing their own people on the altar of opening up.

Some medical specialists here have tried to get the message through that, for a vaccinated person, catching the Omicron variant of Covid will probably not necessitate going to hospital – that you can simply ride it out at home until you recover.

Few people in China seem to be aware of this. Their officials and state media have kept it from them.

So the lockdowns continue and it’s not only Shanghai closed right now. Jilin City (3.6 million people), Changchun (nine million), Xuzhou (nine million), the steel city of Tangshan (7.7 million) and various other towns and villages are keeping their residents indoors.

The strain on people, and the economic cost of it all, must be enormous.

The city is testing the limits of China’s zero-Covid strategy, amid growing public anger over quarantine rules.

The policy sets China apart from most other countries which are trying to live with the virus.

But the increased transmissibility and milder nature of the Omicron variant has led to questions over whether the current strategy is sustainable in the long run.

“Currently, Shanghai’s epidemic prevention and control is at the most difficult and most critical stage,” said Wu Qianyu, an official with the municipal health commission.

“We must adhere to the general policy of dynamic clearance without hesitation, without wavering.”

At least 38,000 people have been deployed to Shanghai from other regions, in what state media have said is the biggest nationwide medical operation since the shutdown of Wuhan in early 2020.