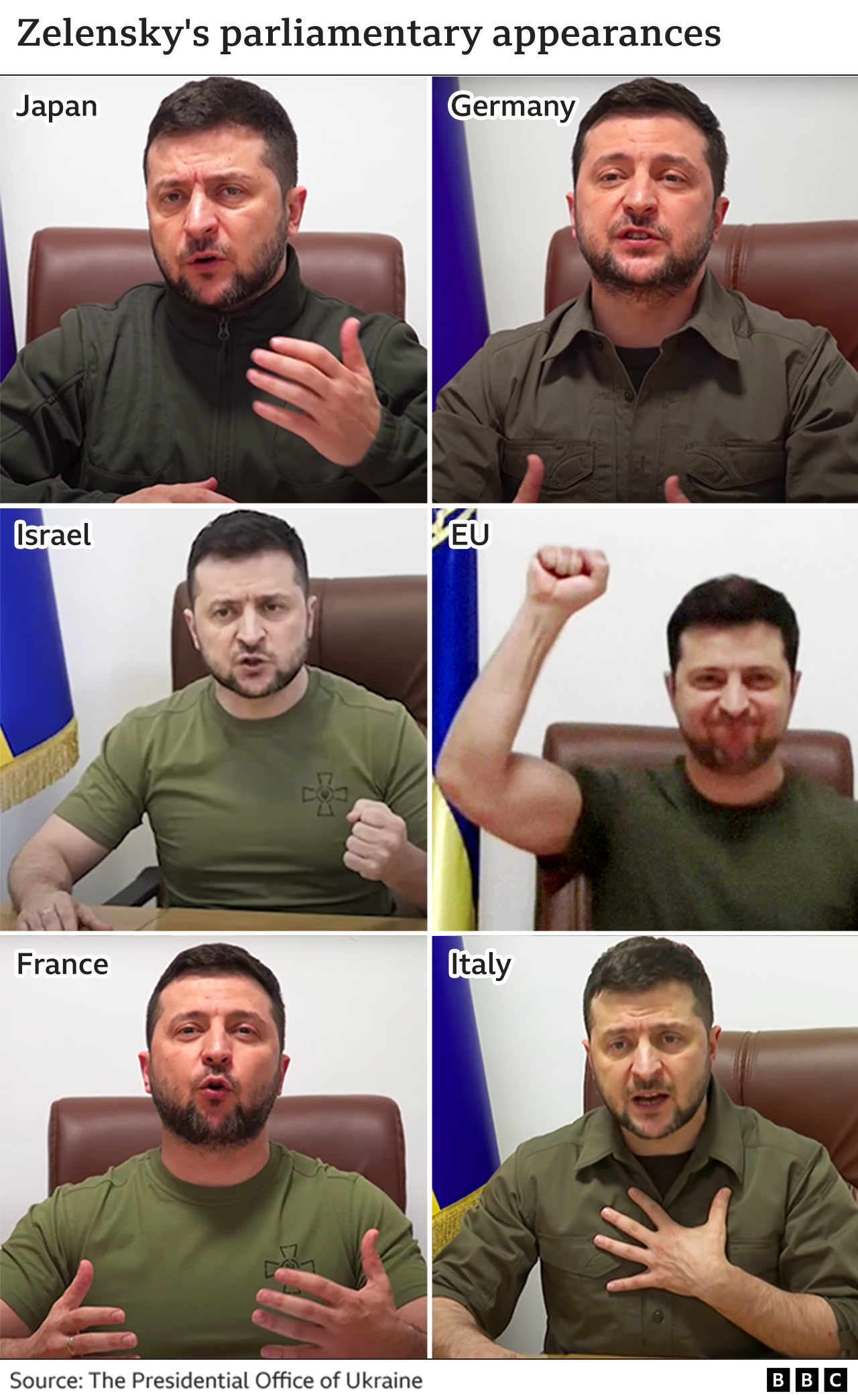 While his army has fought tenaciously on the battlefields of Ukraine, Volodymyr Zelensky has waged an information war on the capitals of the Western world.

Live by video link from a besieged capital, wearing a green t-shirt and sporting several days of stubble, he often signs off with a clenched fist salute. As applause rings out, he disappears. He’s a man in a hurry, after all, with truly existential matters to attend to.

“He knows how to embody the spirit of the nation,” says Jonathan Eyal, of the Royal United Services Institute. “Not only in speech, but also in the way he appears, in his backdrop, where he speaks.”

The speeches, which began with an address to MPs in London on 3 March, have a single urgent purpose – to muster international support – and President Zelensky goes about it with a series of highly tailored messages.

From the fall of the Berlin Wall to the 9/11 attacks on New York and Washington, Mr Zelensky taps into epic national events and traumas.

In Paris on Wednesday he invoked the national motto of “liberté, égalité, fraternité”. In Japan, he raised the spectre of nuclear disaster.

The references aren’t subtle. They’re not supposed to be. They’re visceral.

And Mr Zelensky doesn’t waste time getting to the point. Within a minute or two of his address in London, he was comparing Ukraine’s 13 days of war to the Battle of Britain, the country’s era-defining battle in World War Two.

By way of Shakespeare (“To be or not to be”), he arrived, inevitably, at Winston Churchill. Mr Zelensky did not name Britain’s wartime leader, but subtly adjusted Churchill’s iconic 4 June, 1940 speech to fit Ukraine’s geography.

But as Mr Zelensky’s parliamentary tour has progressed, other more strident notes have crept in. He’s not been afraid to chide and scold the West for what he sees as its failure to deliver enough support.

“In each of the speeches, he’s saying what sort of person are you?” says Nomi Claire Lazar, professor of public and international affairs at the University of Ottawa, who studies political rhetoric. “What sort of nation are you? If you fail to live up to this moment, then shame on you.”

In a speech to the US Congress littered with references to Pearl Harbour, Martin Luther King and Mount Rushmore, President Zelensky rebuked his audience in distinctly undiplomatic language. “We ask for a response,” he pleaded. “For the response to terror. Is this too much to ask?”

Addressing the Italian Chamber of Deputies on Tuesday, President Zelensky again resorted to shaming his audience, pointing out that members of Putin’s circle have enjoyed vacationing in Italy.

“Don’t be a resort for murderers,” he scolded.

As the president of a country suffering an unprovoked invasion, Prof Lazar says, Mr Zelensky has earned the right. “You can’t really go into foreign legislatures and say shame on you,” says Prof Lazar, “unless you’ve already set yourself up as a moral arbiter.”

From his unique perspective, as the leader of a country that’s just been invaded, without provocation, it’s perhaps understandable that Mr Zelensky feels the need to shake any vestige of complacency out of his audience.

“I think there’s some frustration in him and his team,” says Orysia Lutsevych of the Chatham House think tank. “They don’t feel people are shaken enough to the ground.”

For each of his speeches, co-written by close aide Dmytro Litvin, Mr Zelensky has had a captive audience: politicians electrified by his unconventional, direct rhetoric, and fixed too in the uncomfortable spotlight of the Ukrainian leader’s righteous anger.

But he’s also talking for and to his own people.

He speaks in Ukrainian, and shuns the sharp suits normally associated with this kind of political spectacle. It’s an extraordinary transformation for a politician whose approval rating had been falling for months before the war began.

Until the war, Mr Zelensky’s past as a comic actor often felt like a liability. Under attack, it’s suddenly an asset.

“Comedians make their living through this very intimate connection with their audience,” says Prof Lazar. “This sense of what makes us uncomfortable. What makes us elated. What makes us laugh.”

The performance, with its simple, unadorned message – do more to help us – has one last audience: domestic public opinion in the West.

“He’s trying to create this sort of pressure from below,” says Prof Lazar. “Domestic pressure on governments, which is particularly important, because what he’s asking for is really expensive.”

This, ultimately, is what it’s all about. Mr Zelensky did not embark on this virtual tour of the world’s legislatures merely to garner sympathy. Ukraine is fighting for its very existence, and can only carry on doing that with massive, sustained military assistance from its allies.

For weeks, President Zelensky has been asking Nato to establish a no-fly zone over Ukraine. He knows he won’t get it. But he might get the next best thing. “I think they are saying ‘no-fly zone’, because if it’s a no, what do they give you in exchange?” says Ms Lutsevych. “I think that’s the strategy.”

On Tuesday, the head of Mr Zelensky’s office, Andriy Yermak, brought up alternatives to a no-fly zone. “Please enforce the no-fly zone or give us reliable air defence systems,” he said.

Efforts to improve Ukraine’s air defences are already being made, and the US is reportedly considering the supply of ageing but still effective Soviet-made equipment.

With Western leaders about to hold a day of intense discussions about the war, “the agenda will be exactly what other equipment should be handed over to him”, he says.