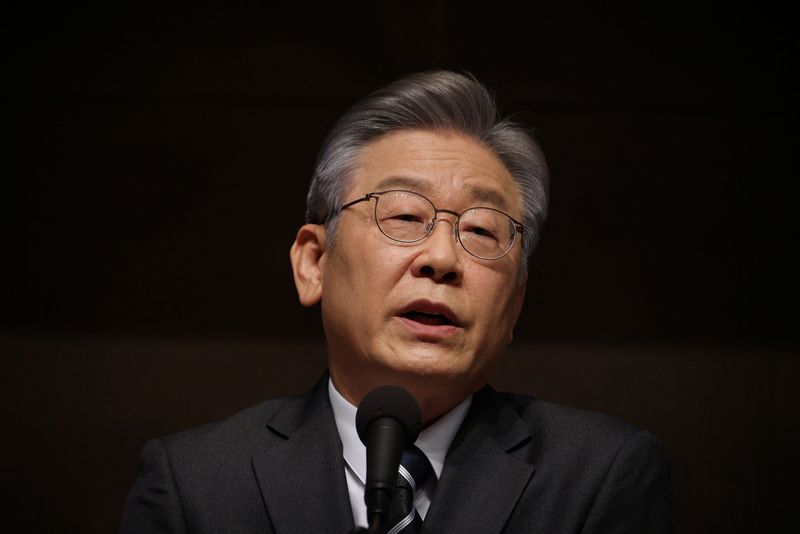 By Hyonhee Shin and Jack Kim

In an interview with Reuters and two other media outlets, Lee Jae-myung also pledged to put aside “strategic ambiguity” in the face of intensifying Sino-U.S rivalry, vowing pragmatic diplomacy would avoid South Korea being forced to choose between the two countries.

The former governor of Gyeonggi province in October became the presidential candidate for President Moon Jae-in’s ruling Democratic Party due to his aggressive COVID-19 responses and advocacy of universal basic income. The election is scheduled for March 9, 2022.

Lee, 57, is in a tight race against his challenger from the main conservative opposition People Power Party, Yoon Suk-yeol, but his ratings have risen in recent weeks, surpassing Yoon in some polls this week.

Lee said he will persuade the United States to win diplomatic and technology aid to launch nuclear-powered submarines, which can operate more quietly for longer periods, amid renewed calls for building one in the military and parliament after North Korea test-fired a new missile from a submarine in October.

Lee cited the deal Australia struck under a trilateral security partnership with the United States and Britain in September to build its own nuclear-powered submarines.

“It is absolutely necessary for us to have those subs. They are not weaponised in themselves, and technology transfer is under way to Australia,” he said. “We can definitely convince the United States, and we have to.”

He dismissed the idea of seeking assistance from France or elsewhere, saying “it is the matter of whether we will keep the deal with Washington or not, and whether we can persuade them or not.”

South Korea is currently banned from reprocessing spent fuel under a civilian nuclear energy pact with the United States, and sources said Moon’s administration had failed to earn U.S. support for such submarines.

A party outsider often critical of Moon, Lee said he will not keep Moon’s policy of strategic ambiguity between the United States, South Korea’s top ally, and China, its largest economic partner.

“We don’t need to be forced to make a choice by being ambiguous,” he said, describing the situation as “retrograde, submissive.”

“With our growing economic, military and soft power, our diplomacy should be focused on making them choose, not us being asked to take sides. I call it pragmatic diplomacy based on national interests,” Lee added.

Moon had offered a bridge between North Korean leader Kim Jong Un and former U.S. President Donald Trump, but was blamed for raising unrealistic expectations for his own inter-Korean agenda following a failed 2019 summit.

“Trump’s top-down approach looked nice but was unrealistic … though summits and working-level talks can create a positive interplay,” Lee said.

He pledged to be an even more proactive mediator to defuse tension and distrust, and restart negotiations between Pyongyang and Washington, but did not elaborate on how.

Any fresh talks should be aimed at crafting a roadmap for dismantling the North’s nuclear and missile programmes in return for U.S. sanctions relief, under which both sides are bound to take concrete action “in a simultaneous, phased manner,” with “snap-back” provisions for the event of noncompliance, Lee said.

“There’s a river of distrust between them,” he said. “Our role should be to open a dialogue channel, devise realisable plans and convince both sides so that they can cross that river.”