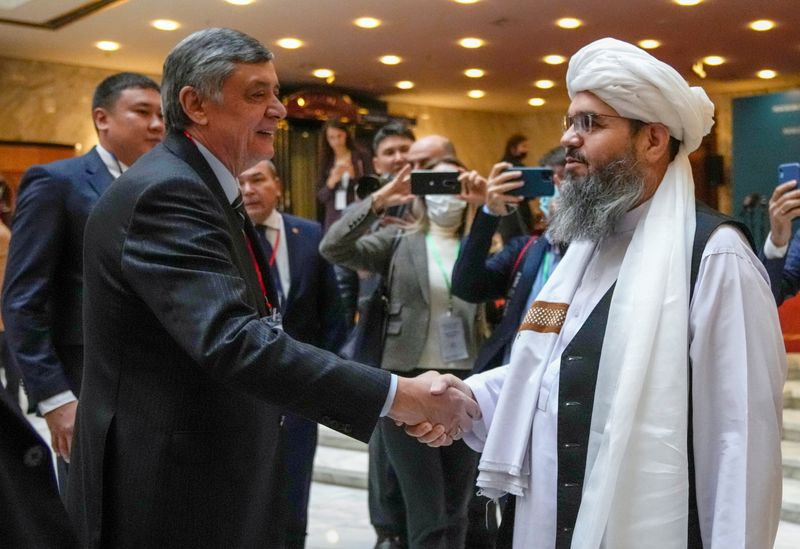 Russian presidential envoy to Afghanistan Zamir Kabulov shakes hands with a representative of the Taliban delegation Mawlawi Shahabuddin Dilawar before the beginning of international talks on Afghanistan in Moscow, Russia, October 20, 2021. Alexander Zemlianichenko/Pool via REUTERS

MOSCOW (Reuters) – Russia called on Wednesday for international aid to support Kabul, as it hosted the Taliban at a major international conference on Afghanistan for the first time since the group took power in August.

Pakistan, China, Iran, India and former Soviet Central Asian states joined Taliban officials at the Moscow meeting. But the United States stayed away, citing technical reasons, while saying that it could attend such talks in the future.

“We are convinced that it is time to mobilise the resources of the international community to provide Kabul with effective financial humanitarian support, including to prevent a humanitarian crisis and reduce migration flows,” Russian Foreign Minister Sergei Lavrov told reporters before the meeting.

Russia’s initiative in hosting the talks is part of an effort to boost its influence in the region after the United States withdrew its forces from Afghanistan and the Taliban took control of the country. Lavrov said he regretted the absence of the United States from the talks.

Moscow is mainly concerned about the risk of instability in Central Asia, and possible migrant flows and Islamist militant activity directed from Afghanistan.

“We call on the Taliban movement – and we discussed this with their distinguished delegation – to prevent the use of Afghanistan’s territory against third countries, most importantly neighbours,” Lavrov said.

Russia fought its own disastrous war in Afghanistan in the 1980s and has close military and political ties with former Soviet Central Asian states that border Afghanistan.

In his speech, Lavrov struck a noticeably conciliatory tone towards the Taliban government, which is still seeking international diplomatic legitimacy that would bolster its calls to unfreeze assets held in the West and let aid flow.

“We note the efforts undertaken by them to stabilise the military and political situation, to set up state institutions,” Lavrov said. Moscow was satisfied with cooperation from the Afghan authorities to ensure the safety of Russians in Afghanistan and the smooth working of its embassy, he said.

Lavrov did not put figures on how much aid Afghanistan might need or how much Russia was willing to provide.

Lavrov said on the eve of the talks that Moscow was withholding recognition from the Taliban while waiting for them to fulfil promises they made when they took power, including on the political and ethnic inclusivity of the new government.

The Taliban have promised to safeguard the rights of women and minorities, but their interim cabinet includes only men, nearly all from the Pashtun ethnic group which makes up less than half the population, from which they draw most of their support.