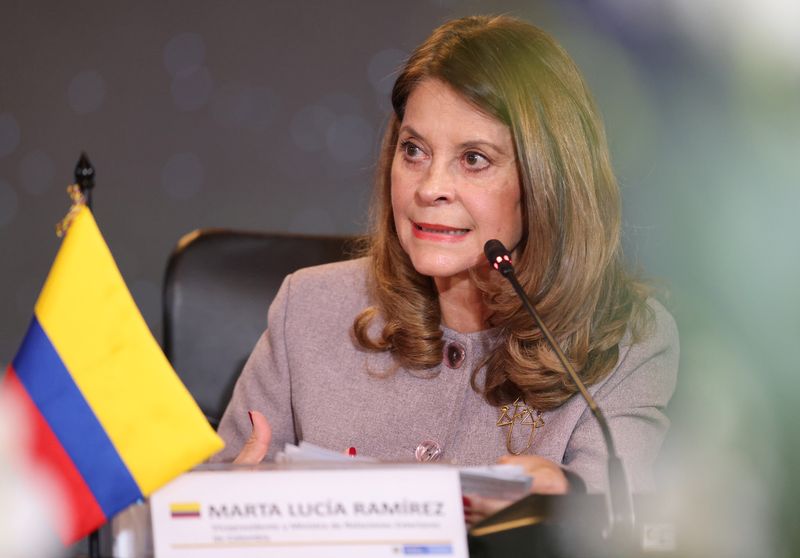 BOGOTA (Reuters) – Russia has promised that military equipment given to Venezuela will not be used to attack Colombia, destabilize Latin America or end up in the hands of illegal armed groups, Colombia’s Foreign Minister and Vice President Marta Lucia Ramirez said.

“We need there not to be even the smallest risk that military cooperation which exists between Russia and Venezuela, and has for a long time, could eventually, because of carelessness or whatever reason, lead to any Russian military equipment being in the hands of illegal armed groups which are present on the border,” Ramirez told journalists Monday night after a meeting with Russian ambassador Nikolay Tavdumadze and other officials.

“The Russian ambassador has expressed to us that no military cooperation of Russia with Venezuela will ever be used for any military action against Colombia, nor any country in Latin America, nor to affect the stability of the region,” she added.

Colombian officials at the meeting between Ramirez and Tavdumadze, including Molano, asked Russia to guarantee that final-use agreements for weapons are enforced, so they cannot be used by third parties, Colombia’s foreign ministry said in a statement.

Tavdumadze, also speaking after the meeting, said the situation had been resolved and conversations would continue through diplomatic channels.

The Colombian government accuses Venezuelan President Nicolas Maduro of sheltering FARC dissidents who reject a 2016 peace deal as well as the ELN, something he has repeatedly denied.

Arauca province is facing a wave of increased violence, with at least two dozen people killed recently in clashes and a car bombing.