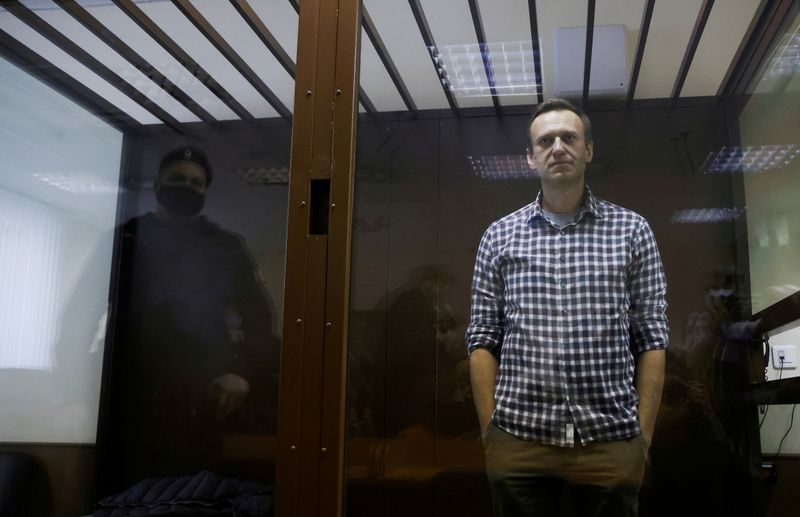 By Andrew Osborn and Polina Devitt

MOSCOW (Reuters) -Russia sharply escalated a campaign against jailed Kremlin critic Alexei Navalny on Tuesday, opening a new criminal case against President Putin’s fiercest domestic critic that could allow the authorities to hand him another decade in jail.

In a case condemned by the West, Navalny, 45, is already serving two-and-a-half years in prison for parole violations he says were trumped up to thwart his political ambitions.

His allies have had their homes raided, their freedom of movement restricted, or fled abroad after a court in June ruled their activities to be extremist and designed to stir up social unrest.

The Kremlin and its loyalists have since said they will maintain and in some cases intensify their tough approach to internal and external critics and organisations that they view as a threat to Russia’s stability.

The new case, details of which were published on the website of Russia’s Investigative Committee, which looks into major crimes, named Navalny as being suspected of founding and leading an extremist group.

Such a crime carries a punishment of up to a decade in jail.

The statement said some of Navalny’s key allies were suspects in the same case and that other associates were suspected of taking part in the group’s extremist activity.

The statement characterised the activities of Navalny and his allies in recent years as criminal.

“The illegal activities of the extremist group were aimed at discrediting state authorities and their policies, destabilising the situation in the regions, creating a protest mood among the population and trying to form an opinion among the public about the need for a violent change of power, (and) organising and holding protest actions that escalate into mass riots,” the statement said.

It accused Navalny’s allies, many of whom now operate from abroad, of carrying on with their alleged illegal activities after their group had been banned as extremist.

Lyubov Sobol, a Navalny allied named in the statement, said on Twitter that the charges against her and the others looked absurd.

“The crimes of my colleagues: took part in elections, investigated the corruption of top officials and attended peaceful protests and wrote on Twitter….” she wrote sarcastically.

She said the new case showed how much Putin feared Navalny, an allegation the Kremlin has previously dismissed.

Navalny was flown to Germany last year for medical treatment after being poisoned in Siberia with what Western experts concluded was the military nerve agent Novichok.

Navalny accused Putin of ordering the attack, something the Kremlin has denied.

Moscow has rejected the allegations and the experts’ findings – which prompted a fresh wave of sanctions against Russia – and accused the West of a smear campaign against it.