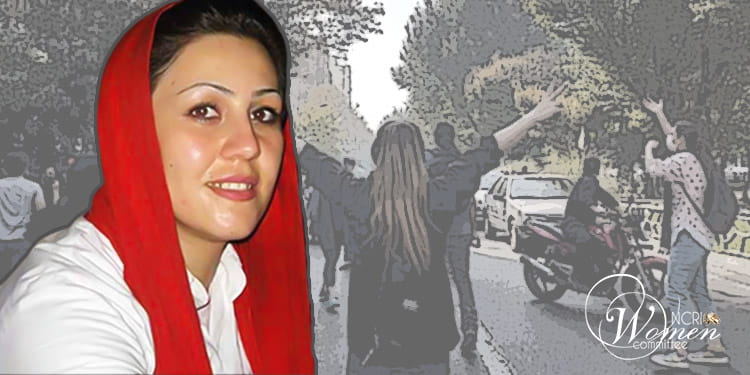 On the eve of her 14th year in prison, Maryam Akbari advises detained protesters and their families

Thirteen years have passed since the arrest and imprisonment of resistant political prisoner Maryam Akbari Monfared. She was taken to Evin prison “to provide some explanations” at midnight of December 29, 2009, without being able to say goodbye to her daughters. But she never returned home.

The resistant political prisoner Maryam Akbari Monfared has spent all these 13 years in prison without a single day off.

In a letter she sent at the beginning of her 14th year of incarceration from exile in the central prison of Semnan, the resistant political prisoner Maryam Akbari Monfared wrote: “This is not a story you are reading; it is the true story of the suffering of only one person out of 85 million.”

The resistant political prisoner Maryam Akbari Monfared is the sister of four martyrs of the People’s Mojahedin of Iran. She was sentenced to 15 years in prison on the charge of Moharebeh, or waging war on God, for seeking justice for them.

In this letter, while expressing her experiences of resisting in prison, she advises the courageous detained protesters and their families to fight the interrogators by reinforcing their faith in the cause of freedom.

Parts of the letter by the resistant political prisoner Maryam Akbari Monfared appear below:

Thirteen years is a breathtaking battle to pass second by second. Counting 13 years day by day (that is 4 thousand and 745 days) makes a person tired, let alone if she wants to spend 4 thousand and 745 days one by one in the middle of an unequal battle. It is not a 4,000-page story; it is the naked reality of life some fascists have imposed on us because we did not want to surrender.

Although I wanted to be with my children, what mother wouldn’t? But I do not regret it, and I am more determined to continue my path. I have said this in every formal and informal interrogation session and am happy to repeat it!

I stayed away from my children for 13 years, but I saw the crime with my own eyes for 13 years, and my resolve became more robust.

This is a silent documentary about the oppression of women one can’t bear to hear one of them, let alone live with hundreds of these tortured symbols and feel their pain with skin and flesh.

In 13 years, I saw dozens of children and hundreds of teenagers and young people the same age as my daughters, and I touched them and talked to them.

If you ask me, then how did I survive in the darkness of torture and exhaustion of time? I say that the blazing flame of faith in my heart has kept me going.

Amid loneliness with empty hands, this warm and rebellious flame is what the interrogators want to steal from the prisoner from the first moment of her arrest so that her being freezes and surrenders to the yoke.

But I kept it burning for all 13 years with the holy fury over the tortures I witnessed and pierced my heart! I laughed and made others laugh so I could stand firm because resistance is our heart.

Faith in the cause that my brothers and sisters died for. Faith in the path I stepped into and the clenched fists and firm steps of the young people who are now protesting in the streets against the dictatorship with their bodies and lives.

Yes, faith in the innocence and oppression of my brothers and sisters, whom I never considered dead; they were and are the most alive for me. They grabbed my hand in every moment of my prison time. And now I find them in the streets of Iran.

I saw Alireza (executed in 1980) in the clenched fists of that young man in Naziabad.

Yes, they wanted to bury and keep them anonymous, but now we see how the brave generation continues the path of the same young people who did not surrender to Khomeini.

With the news of every protest and every uprising, this rebellious flame of faith sparks in my heart while I am among women whose only hope of salvation is to break these iron doors.

To my fearless daughters and sons in the streets, I passionately long every moment to be with them; if you are arrested, don’t trust the interrogators. They are not like us! The enemy is the enemy at any moment!

Increase your faith in your cause as much as possible. This faith is the only thing that can help you in the loneliness of solitary confinement.

I tell the families of the prisoners to ignore the promises, fears, and threats. You can only save your children’s lives by having people cry out and repeat their names! No interrogator cares for your interest. Do not be silent. Just cry out!

To the grieving families, to every mother who sacrificed her loved one, and to all the brothers and sisters who lost a sibling, I bow to their martyrs and say that I share their grief. I reach out to them from behind bars and vow to stand by them firmer than ever to seek justice.

I am talking about 13 years of non-stop battle, but to summarize it in short, “Finally one day, I will sing the song of victory from the summit of the mountain like the sun.”