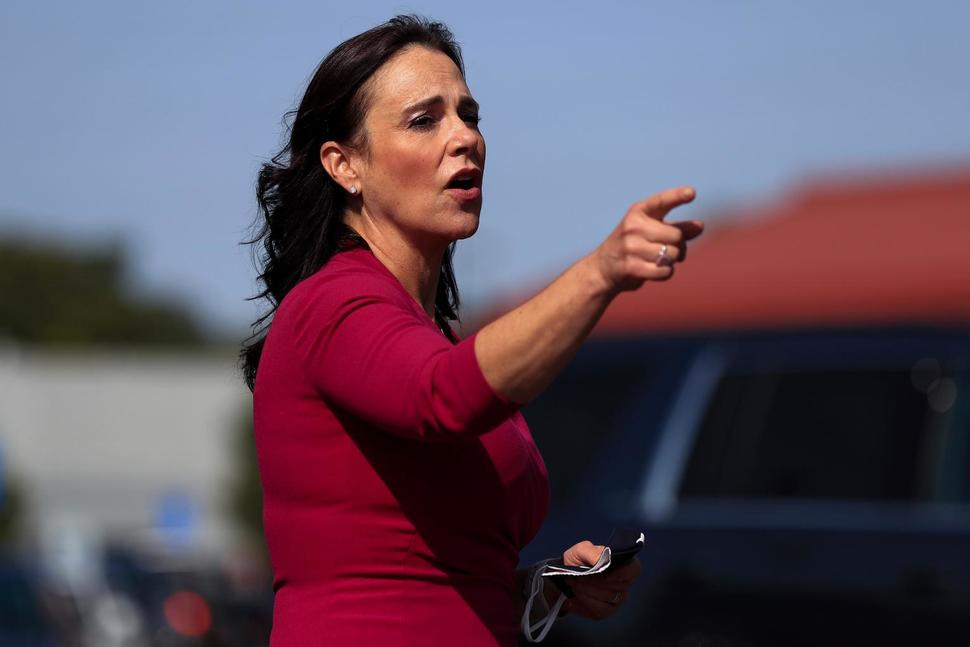 One Ohio U.S. Senate candidate has been circulating a who’s-done-more-for-Donald Trump scorecard.

One candidate has been circulating a who’s-done-more-for-Donald Trump scorecard. Footage of a waving Trump was dropped without context into a TV ad for another. A photo posted to Twitter gushes over the ex-president and his wife stopping by a third candidate’s fundraiser just to say hello.

The U.S. Senate primary in Ohio is still a year away, but Republican contenders already are working furiously to cast themselves as Trump’s favorite in the open race. That work can be awkward and far from subtle. But it is a measure of how badly the candidates covet a Trump endorsement in a state the former president twice carried by 8 percentage-point margins.

But despite all his pride in playing kingmaker, Trump has been reticent in his endorsements — in some cases even waiting until after the primary to give his approval. That leaves the field in Ohio positioning frantically in hopes of being deemed the Trumpiest of them all.

“To the extent that it’s being characterized as a cult of personality, I reject that,” Triantafilou said. “It’s about a set of principles that he boldly put into place as president. And that’s why you’re seeing our candidates running to garner the support of the people who loved his agenda.”

Ohio’s Democratic U.S. senator, Sherrod Brown, had a different take: “The five Republican candidates for Senate are like kids on a playground sticking their tongue out and saying Donald Trump loves me more than he loves you,” he said.

When GOP Sen. Rob Portman announced earlier this year that he would not run again, some Ohio Republicans expected Trump to endorse Jane Timken to replace him. Timken is a former state GOP chair who raised money for Trump and presided over strong Republican showings topped by him in 2020. Trump had helped her oust a party chair loyal to former Gov. John Kasich, a Trump critic who challenged him for the 2016 nomination.

But former Ohio Treasurer Josh Mandel, whose two earlier failed runs for the seat boosted his name recognition, hopped into the race early and moved ahead in early public and internal polling, an advantage his allies used to slow down the endorsement process, according to campaign aides who would not be named discussing the private conversations about an endorsement.

In late March, Mandel, Timken and two wealthy businessmen in the race, Mike Gibbons and Bernie Moreno, made pilgrimages to south Florida and suddenly got summoned to a group meeting with Trump before a fundraiser he headlined at his West Palm Beach golf club. The candidates were asked to make their case for Trump, in a bizarre scene reminiscent of Trump’s reality TV show, “The Apprentice.”

J.D. Vance, author of the book “Hillbilly Elegy” and another potential candidate, made a separate trip to Trump’s Mar-a-Lago resort, said a person who spoke on condition of anonymity because it was a private meeting.

But no endorsement has followed and the campaigning for Trump’s affection has continued. Earlier this month, an outside group, the USA Freedom Fund, linked Mandel to Trump in a TV commercial aired during Kentucky Derby coverage. It showed Trump speaking at a pre-2016 rally, even though Mandel was nowhere in sight. The spot also attacked Vance for past criticisms of Trump.

Timken has declared herself an “unwavering fighter for Donald Trump,” and circulated a scorecard comparing all the ways she is the most Trumpian in the field. Gibbons and Moreno point to their past financial backing of Trump and other Republicans. A Moreno supporter last week posted photos of the candidate being greeted at a Mar-a-Lago fundraiser by Trump and his wife, Melania.

Trump has no immediate endorsement plans, according to Jason Miller, a Trump spokesman.

“We want to make sure that any endorsements we make help to clear the field so it’s either a 1-on-1 matchup or it puts the candidate that President Trump is endorsing on a path toward victory,” he said.

It is possible Trump’s endorsement may not come, if at all, until a winner is already clear. He hates losing, and he clearly doesn’t want to back the wrong horse as he tries to maintain his grip on the party nationally.

He waited until after Glenn Youngkin won the seven-candidate GOP primary for Virginia’s governor before endorsing in that race, for example, in which newcomer Youngkin last week defeated a candidate who closely aligned herself with Trump.

However, Gary Abernathy, a former newspaper publisher in southern Ohio who had worked for the state GOP and for Portman, sees peril in that GOP strategy.

“If the primary is being held today and you have him (Trump) endorse you, you’d be the winner, I don’t think there’s any doubt about that,” said Abernathy, a former Trump supporter who says the former president’s refusal to accept the 2020 presidential election results and encouragement of the Jan. 6 U.S. Capitol protests have disqualified him from further leadership.

“The danger is painting yourself into all-in on Trump right now and then you have to sell yourself in the general election,” Abernathy said. “How much of how you tie yourself to Trump now are you going to to wish you could untie a little bit? The general election is a different story.”

Besides Vance, who has been appearing on such Trump-friendly media shows as Tucker Carlson’s on Fox News, U.S. Reps. Mike Turner and Bill Johnson and state Sen. Matt Dolan also have been mulling runs. Turner released a biographical video March 29 that includes a clip of Trump praising him at an Ohio rally.

On the Democratic side, U.S. Rep. Tim Ryan is the only major announced contender.

In another time, Portman — he twice won Senate election landslides — would be the endorsement to secure in the race. Portman has played down the primary’s focus on Trump, predicting the candidates will campaign on legislative priorities as the race moves on.

“Maybe they’re emphasizing other things,” said Portman, who is considering making an endorsement during the primary. “We’ll see how it all shakes out, but I’m sure it will be a vigorous debate in the primary.”

One test of the candidates’ loyalties came in their reactions to a fellow Ohio Republican’s vote in favor of impeachment. Timken’s pro-Trump scorecard was distributed at a meeting of the state GOP’s central committee this month where Rep. Anthony Gonzalez was censured and urged to resign, even as her opponents criticized Timken for not taking action against him while she was party chair.

Notably, the candidates don’t appear to be hustling for an endorsement from Republican Gov. Mike DeWine, who has bipartisan popularity. The governor has led the state’s response to the pandemic more aggressively than Trump did nationally as president, drawing backlash in his own party.

So much so, Trump has mused publicly about whether there should be a primary foe for DeWine in 2022.