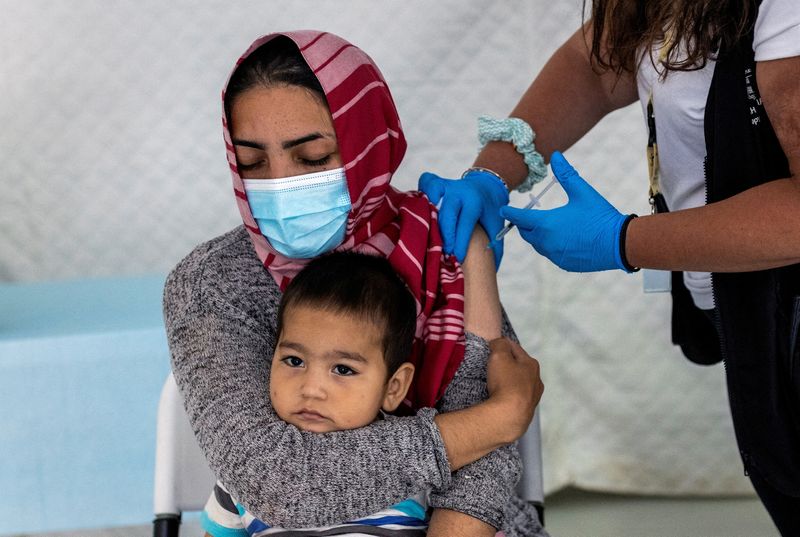 FILE PHOTO: A migrant holds her baby as she receives a shot of the Johnson & Johnson vaccine against the coronavirus disease (COVID-19) in the Mavrovouni camp for refugees and migrants on the island of Lesbos, Greece, June 3, 2021. REUTERS/Alkis Konstantinidis/File Photo

By Francesco Guarascio and Panu Wongcha-um

BRUSSELS/BANGKOK (Reuters) – Tens of millions of migrants may be denied COVID-19 vaccines from a global programme because some major manufacturers are worried about legal risks from harmful side effects, according to officials and internal documents from Gavi, the charity operating the programme, reviewed by Reuters.

Nearly two years into a pandemic that has already killed more than 5 million people, only about 7% of people in low-income countries have received a dose. Vaccine deliveries worldwide have been delayed by production problems, hoarding by rich countries, export restrictions and red tape. Many programmes have also been hampered by hesitancy among the public.

The legal concerns are an additional hurdle for public health officials tackling the coronavirus – even as officials say unvaccinated people offer an ideal environment for it to mutate into new variants that threaten hard-won immunity around the world. Many COVID-19 vaccine manufacturers have required that countries indemnify them for any adverse events suffered by individuals as a result of the vaccines, the United Nations says.

Where governments are not in control, that is not possible.

The concerns affect people, such as those displaced by the Myanmar, Afghanistan and Ethiopian crises, who are beyond the reach of national governments’ vaccination schemes.

For refugees, migrants and asylum-seekers, as well as people afflicted by natural disasters or other events that put them out of reach of government help, the global programme known as COVAX created a Humanitarian Buffer – a last-resort reserve of shots to be administered by humanitarian groups. Gavi, the vaccine alliance, is a public-private partnership set up in 2000 to promote vaccination around the world.

But that buffer does not have any mechanism to offer compensation. Gavi, which operates COVAX with the World Health Organization (WHO), says that where those applying for doses, mainly NGOs, can’t bear legal risks, deliveries from that stockpile can only be made if vaccine-makers accept liability.

The companies that are willing to do so under these circumstances provide only a minority of the programme’s vaccines, according to people familiar with the matter and the documents, written by Gavi staff for a board meeting starting at the end of November.

More than two-thirds of COVAX doses have come from Pfizer Inc. and its partner BioNTech SE, AstraZeneca PLC and Moderna Inc., Gavi says. Moderna declined to comment. AstraZeneca and Pfizer said they were in talks with Gavi but declined to comment further. All three said they are committed to making doses available to poorer nations at relatively low prices. Pfizer said it was collaborating directly with governments in Jordan and Lebanon to donate doses for refugees.

Mainly because of the legal concerns, less than 2 million doses have so far been sent from the buffer, Gavi says. About 167 million people risk being excluded from national programmes, according to United Nations data cited in the documents.

Unless all the firms accept legal liability, “access to vaccines for some populations will remain a challenge,” the Gavi documents say, adding that new crises will generate additional demand to cover displaced populations.

The vaccine makers’ reluctance to take on the legal risks is “a major hurdle” in attempts to provide vaccines for the buffer, a spokesperson for Gavi told Reuters. Gavi did not comment on the details in the documents, but said applications for vaccines are confidential until the doses are delivered. In September, Gavi’s CEO, Seth Berkley, tweeted https://twitter.com/GaviSeth/status/1440780492324818945?s=20 an appeal to drugmakers to waive their requirements for legal indemnity.

Three Chinese drugmakers have agreed to shoulder legal risks when their shots are delivered through the buffer: SinoVac Biotech Ltd, Sinopharm Group Co. Ltd, and Clover Biopharmaceuticals Co. Ltd, according to the Gavi document. The drugmakers did not respond to requests for comment.

Johnson & Johnson of the United States confirmed it would waive a requirement for indemnity for deliveries from the buffer: “We are proud to be part of this effort to protect the world’s most vulnerable people,” said Paul Stoffels, Vice Chairman of the Executive Committee and Chief Scientific Officer. He did not elaborate.

However, less than one-third of COVAX supplies have come from these four firms, COVAX data shows: Clover’s shot has not yet been approved so is not in use.

The global industry association, the International Federation of Pharmaceutical Manufacturers and Associations (IFPMA), said “no company has refused to consider” taking on the legal risk. However, in the case of shots delivered from the buffer, it said some firms felt they could not do so without full knowledge of where and how vaccines would be used.

It would be hard to continuously monitor vaccines for safety in refugee camps, and delivery is logistically very challenging and not suitable for all types, said the European Federation of Pharmaceutical Industries and Associations (EFPIA), which represents large pharmaceutical companies in Europe.

People may blame vaccines for problems that emerge afterwards even if they are unrelated, it said.

“This could then lead to an increased number of litigation cases … during which the safety and efficacy of the vaccine would be publicly questioned,” it said in a statement to Reuters. That might lead to increased vaccine hesitancy and a slower recovery from the pandemic, it said.

So far there is scant information on COVID vaccine litigation, but claims made to out-of-court compensation programmes are one measure of the risk. A programme in the United States has so far not paid out anything, public data show; neither has one set up by the WHO for lower income countries, the WHO said. In Europe, a handful of compensation awards have been granted for undisclosed amounts of money, official data from Denmark, Germany, Norway and Switzerland show.

Globally there have been few reported COVID infections among refugees, migrants and asylum-seekers – testing is not always systematic and infections can generate only mild symptoms especially in younger people.

But cramped conditions and weak healthcare expose them to high infection risk. This, combined with low levels of vaccination in a mobile population could favour the emergence of new variants and be a vector for infection, said Mireille Lembwadio, Global Vaccination Coordinator at the International Organization of Migration (IOM), a U.N.-related body that advises governments and migrants.

“Leaving them unvaccinated could help spread the virus and its variants across the world,” she said.

Francois Nosten, a French professor who helps coordinate healthcare for people from Myanmar living on the border with Thailand, is one of those waiting for vaccines. In June, he put in a request from the Humanitarian Buffer for 70,000 doses – some for some of the 90,000 or so who are sheltering in camps along the border, but most for unregistered migrants in the border town of Mae Sot and nearby villages.

Nosten, whose main work is researching malaria, is expecting the doses – a fraction of the more than 8 billion administered worldwide – this month. He has been told they will come from Sinopharm, and he hopes they can help inoculate key at-risk groups in Thailand’s Tak province. Gavi said delivery arrangements are still being finalised.

About 20,000 doses will be given to people in the camps by the International Rescue Committee (IRC), a humanitarian group working with Nosten.

“At this point whatever vaccine we can secure we are grateful for,” said its Thailand Director, Darren Hertz. He added that the IRC believed the likelihood that a member of the refugee population would attempt to take legal action in case of side-effects was “extremely low.”

Hertz said the IRC has received a handful of ad hoc vaccine donations from the Thai government and is currently tackling significant outbreaks in five of nine camps on the border, where about 3,000 cases have been confirmed, including at least 26 deaths. A Thai foreign ministry spokesperson confirmed the government was working with the IRC on providing vaccinations in shelters along the border.

Nosten’s charity, Border Health Foundation (BHF), is one of eight organisations worldwide that have applied to distribute the shots from the Humanitarian Buffer and one of three to be approved, Gavi said.

Ann Burton, Chief of Public Health at the U.N. refugee agency UNHCR, said the liability issue was one reason agencies have been slow to apply. The programme has also been delayed by the general shortage of vaccines and administrative hurdles.

Organisations applying for supplies from the buffer may not choose which vaccines they receive. Working with displaced people, Nosten said it would be more convenient to give them Johnson & Johnson’s vaccine, which offers protection after a single dose instead of the two doses needed for Sinopharm’s.

But the Sinopharm version will be “better than nothing,” he said.

More than 100 national governments have promised to offer vaccines where possible to all the displaced people on their soil, according to the IOM. However, the U.N. group says migrants and refugees are often effectively excluded from such schemes because of administrative or cultural hurdles.

In cases where governments aren’t in charge or have not agreed to vaccinate migrants, COVAX’s Humanitarian Buffer is the only option. At least 40 countries have yet to include unauthorised migrants in their vaccination programmes, according to the IOM – it and the UNHCR declined to name the countries.

Gavi set up the buffer in March 2021, planning to reserve up to 5% of vaccine doses as they become available to COVAX, which would amount to roughly 70 million doses so far.

The only shots delivered from the buffer so far – just over 1.6 million Sinopharm doses – landed in Iran in November, where high numbers of displaced Afghans have arrived, UNICEF Iran said. That’s enough to inoculate about 800,000 people; more will likely be needed, UNICEF said.

The vaccine makers’ legal concern is rooted in the unprecedented speed of the effort to develop the COVID shots, the EFPIA said.

In normal circumstances, drugmakers buy insurance to cover liability for vaccines’ potential adverse effects. But COVID forced them to develop drugs so quickly that some side effects – for instance, a rare blood-clotting condition in some of those who took the AstraZeneca vaccine – are emerging as shots go into people’s arms.

Many governments and international agencies have set up compensation schemes to reimburse victims and avoid lengthy litigation. An emergency law invoked by the U.S. government provides legal immunity for drug companies for side effects from their COVID-19 vaccines used in the country. The only exception is for instances of “wilful misconduct.”

“Vaccine manufacturers try to minimize legal risks in almost every setting,” said John T. Monahan, Professor at Georgetown University. “The gold standard is full immunity from lawsuits. If they accept carve-outs, it may become more difficult to reach that goal.”