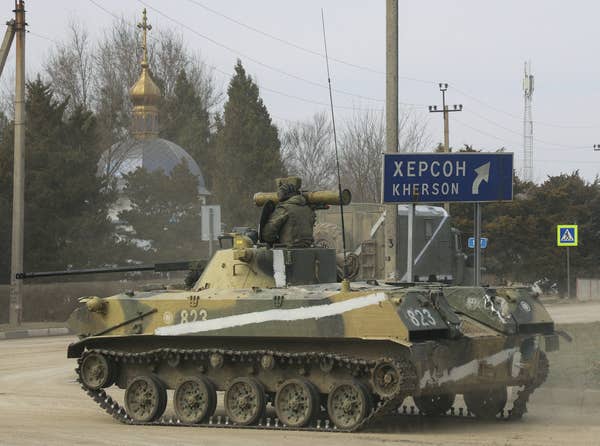 Russian President Vladimir Putin has made it abundantly clear – in his televised address on Monday night, in a lengthy essay he published last July and in his policies over the past two decades – that he does not regard Ukraine as a legitimate independent nation. On Thursday morning, with the wide-scale attack the Russian army launched on Ukraine, he has finally shown any lingering skeptics that he plans to end Ukraine’s 30 years of independence.

But despite Russia’s overwhelming military superiority, this will not be as easy as Putin seems to assume.

Putin’s message to his armed forces that Ukraine is “run by neo-Nazis” isn’t just a ridiculous assertion – especially since Ukraine’s democratically elected president, Volodymyr Zelenskyy, is himself Jewish. It is also an insight into Putin’s war strategy.

It is based on his expectation that once Russian forces are within Ukraine, cutting off its vital supply routes and encircling the main cities, Zelenskyy’s government will crumble, the Ukrainian soldiers will put down their arms and the “liberating” Russian troops will be greeted with flowers, as if they were the victorious Red Army 80 years ago.

In the short-term, parts of this scenario may materialize. Russia’s massive propaganda machine will certainly work overtime to create the impression that it is. But Ukraine’s history strongly suggests this will not be the outcome in the long run.

It may not have enjoyed more than brief periods of independence, but Ukraine’s national identity goes back many centuries, both entwined with that of Russia but also distinct from it. It emerged as a sovereign state in 1991, following the collapse of the Soviet Union, despite all its suffering throughout the preceding century. The millions of dead in two world wars, civil war, famines – including one that was intentionally orchestrated – and the years of Russian czarist, Soviet and Nazi German rule failed to eliminate Ukraine as a nation. Ukrainians have survived and seen off worse enemies than Russia’s current dictator.

Even if Russia’s army, as now seems to be the intention, makes it all the way to Kyiv, topples the government and occupies much of Ukraine’s territory, significant pockets of resistance will remain and extensive networks of Ukrainian fighters will continue the war behind enemy lines.

Russia’s armed forces are currently taking out Ukraine’s air defenses and beginning the invasion at multiple points on its borders and Black Sea coastline – but even they don’t have the capacity for a long and dirty war of occupation and attrition in such a large country.

If Russia does go all the way, it could be facing a scenario far worse than its costly and ultimately failed Soviet occupation of Afghanistan in the 1980s.

Putin has spent much of his adult life studying the downfall of the Soviet Union and pinpointing the mistakes he believes the Soviet leadership made. The Afghanistan campaign played a part in eroding the public’s trust in the Kremlin, and Putin obviously feels this will not be the case with Ukraine. This is likely to be his most crucial mistake.

While a not inconsiderable section of the Ukrainian population will welcome the invaders, either because they still feel Russian or out of corruption or pragmatic reasoning, there will be many who continue to resist. And unlike in Afghanistan, where the fighting and slow bleeding of the Russian occupier was happening in a remote country and, for the most, far from the world’s view, Ukraine is in Europe.

This is the high speed, interconnected 21st century, where every event is immediately captured by smartphone cameras and streamed online. Every ambush of a Russian patrol. Every time a Javelin rocket sets a Russian tank alight and a Stinger missile shoots down a Russian helicopter. Every graphic detail, including the faces of the dead and the wounded, will be brought home to the Russian public.

The erosion of public trust and support of this campaign will be much faster than in the long decade of Russia’s presence in Afghanistan.

And there is already reason to believe – though polling from within Russia is sketchy – that Putin’s subjects aren’t that enthusiastic about becoming the occupiers of a sister nation. That is one of the reasons Putin is trying so hard to make this look like he’s liberating Ukraine from a “neo-Nazi” regime rather than it being a hostile takeover. Within Russia itself, the media is still referring to the invasion as a “special forces operation in Donbas.”

In 2014, the invasion and annexation of the small Crimean Peninsula, which took place within a matter of days and without casualties, was a PR boost for Putin at home. The much less successful attempt to carve off large parts of eastern Ukraine that has been ongoing ever since, at the price of hundreds of Russian – and thousands of Ukrainian – lives, has been largely hidden from the eyes of the Russian public. This war will not be hidden, and that could upend all of Putin’s calculations.

Seasoned Russia-watchers have been skeptical in recent months as Western intelligence assessments of Putin’s war plans were leaked to the media. Those who thought they understood him continued to believe in his innate caution and risk-aversion. They have been proven wrong, but they’re not the only ones who have to reassess all their previous beliefs.

For Western leaders, there is now the stark and bleak realization that the structures they put their trust in to ensure peace and stability in Europe have been found to be insufficient. Diplomacy has failed. So too has the belief that the economic benefits of open trade with Russia would make war unthinkable.

The conclusions are difficult but inescapable. Larger proportions of gross domestic product will have to be spent on defense and energy policies overhauled. The Nord Stream 2 natural gas pipeline from Russia to Germany will not be the only casualty.

Then-U.S. President Donald Trump toyed with the idea of the United States leaving NATO, and French President Emmanuel Macron proclaimed the military alliance “brain-dead” and dreamed of replacing it with a European security framework. Instead, NATO is now more essential than ever and its leaders are coordinating at their highest level for years – another factor Putin seems to have been wrong about.

Western countries have made the understandable decision not to intervene militarily on the side of Ukraine, a non-NATO member, but they can be expected to move soon beyond economic sanctions and pursue other avenues of hitting Russia – including cybersabotage and damaging intelligence leaks. And, most importantly, by reinforcing their presence in the NATO members that border on Russia and Ukraine.

Israel is going to have to reassess, too. The current policy, going back as far as the 2008 Russia-Georgia war, has been to remain on the sidelines.

Russia is home to a large Jewish community, which has a long and deadly experience of officially sanctioned antisemitism. It also plays an increasingly active role in the region, including in the skies over Syria. But the moment for remaining neutral has now passed.

On Thursday morning, Foreign Minister Yair Lapid voiced the first official and public condemnation of Russia by an Israeli leader since Putin’s wars began in 2008. And if Israel is now openly criticizing Putin, that is yet another clear sign that something has indeed fundamentally changed.