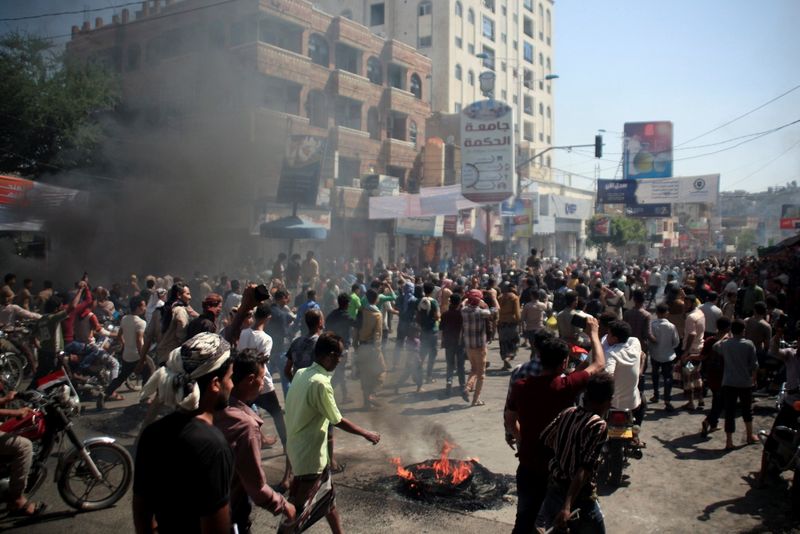 People demonstrate against the deteriorating economic situation and the devaluation of the local currency, in Taiz, Yemen September 27, 2021. REUTERS/Anees Mahyoub

ADEN (Reuters) – Security forces fired shots in the air to disperse hundreds of protesters in Yemen’s third-largest city of Taiz on Monday as unrest over poverty spread in areas held by the Saudi-backed government.

Dozens of people blocked a street and entrances to several districts in the disputed southwestern city with rocks and burning tires, witnesses said, before the crowd swelled to hundreds protesting sharp drops in the currency that has stoked inflation.

Earlier this month, three people were killed in violent protests in Aden and other southern cities controlled by the internationally recognised government, which was ousted from the capital Sanaa by the Iran-aligned Houthi group in 2014.

In Taiz on Monday, security forces and armed men fired shots in the air to stop protesters from ripping apart a poster of Yemen’s Saudi-backed president, three witnesses said.

Police spokesperson Osama al-Sharaabi said security forces were “committed to safeguarding citizens’ rights to peaceful means of expression” but would not allow “any attacks on public and private interests”.

The war, in which a Saudi-led coalition has been battling the Houthis for over six years, has devastated the economy and depleted foreign exchange reserves in the impoverished Arabian Peninsula nation, which imports the bulk of its goods.

Around 80% of the population is reliant on aid and millions face starvation in what the United Nations says is the world’s largest humanitarian crisis.

The Saudi-backed government, which is based in the south, has struggled to pay public sector wages and has resorted to printing money to cover the deficit.