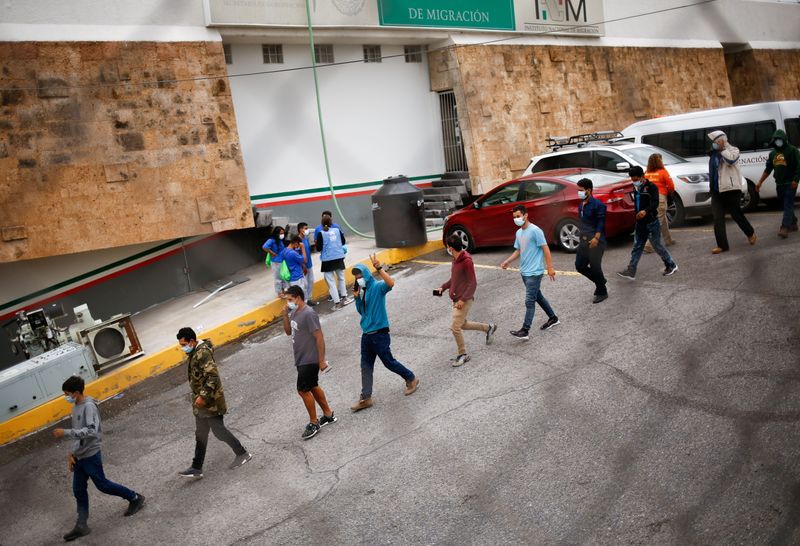 FILE PHOTO: Migrants, who were expelled from the U.S and sent back to Mexico under Title 42, queue outside of a National Institute of Migration (INM) building in Ciudad Juarez, Mexico August 13, 2021. REUTERS/Jose Luis Gonzalez

By Dave Graham and Laura Gottesdiener

MEXICO CITY (Reuters) – Under pressure from the U.S. government to contain illegal immigration, Mexico has been quietly flying thousands of undocumented migrants to the south of the country to expedite their departure, according to officials and migrants.

The government said in late May https://www.gob.mx/inm/prensa/realiza-inm-retorno-asistido-de-932-personas-migrantes-rescatadas-en-la-frontera-de-mexico-con-estados-unidos?idiom=es it had carried out four return flights of migrants as it began a so-called “air bridge” south, without saying how many people were on them.

Some 1,200 people were flown south in the past week alone, they said. The figures have not been previously reported.

Mexico’s National Migration Institute declined to comment. The foreign ministry said in a statement it supported a humane migratory system that respected national and international law, and was working with Washington to tackle the causes of migration.

The migrant flights come as the Biden administration faces increasing criticism over its management of the issue.

“This is all being done to accommodate the Americans, who are very worried about migration,” said one of the Mexican officials. “Efforts are being made to speed up expulsions.”

Mexico, meanwhile, is pushing for the United States to lift restrictions on non-essential travel across their shared border that were imposed during the pandemic.

The U.S. State Department did not immediately respond to a request for comment.

The migrants put on the Mexican domestic flights were from all over the world and had either been detained under Mexican law, or expelled from the United States under measures such as Title 42, a mechanism used to expedite removals in the pandemic under the Trump administration, one of the officials said.

Apprehensions of undocumented migrants on the U.S. southern border with Mexico have leapt in 2021, piling pressure on Biden, and with it, the Mexican government to stem the flow.

Since October of last year, U.S. agents have conducted 1,276,000 apprehensions or expulsions of migrants crossing the U.S. border illegally, including nearly 200,000 in July alone.

On Tuesday, a flight carrying dozens of migrants, including children, landed in the southern city of Tapachula, according to a Reuters witness and observers from the Coalition for Humane Immigrant Rights (CHIRLA), an advocacy group.

Mexican authorities then loaded the migrants onto buses, drove them about a half an hour to a remote border crossing, and instructed them to walk across the pedestrian bridge into Guatemala, according to the witnesses.

A member of Mexico’s National Guard in Tapachula said that when the planes land, the migrants are transported on immigration agency buses to crossing points in Talisman and Ciudad Hidalgo, from which they enter Guatemala.

Guatemala’s government did not respond to a request for comment.

Among those on Tuesday’s flight was Antonio, a 26-year-old Honduran, who broke down in tears after he and his young son found themselves in the tiny Guatemalan town of El Carmen.

Declining to give his last name, Antonio said that he and his boy were apprehended by Mexican immigration authorities in the northern city of Monterrey and made to board the southbound plane, despite hoping to seek asylum in Mexico.

Arturo Viscarra, staff attorney with CHIRLA, which has documented the Mexican flights, argued the process was denying migrants asylum rights, leaving them “dumped in the middle of the night in Guatemala,” vulnerable to deprivation and crime.

“I don’t have a single peso,” he said, weeping. “And my son hasn’t even eaten since yesterday.”

Mexico’s government in its statement said it was committed to protecting the rights of migrants and asylum seekers.