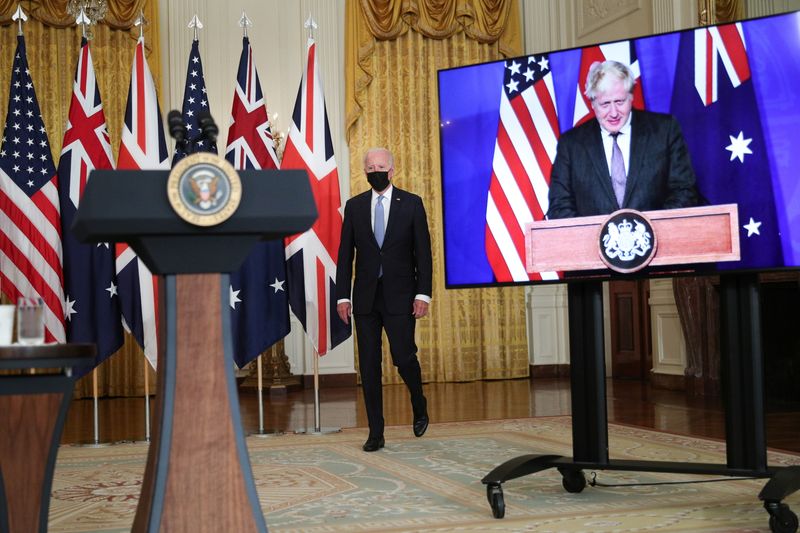 By Trevor Hunnicutt and Elizabeth Piper

NEW YORK/LONDON (Reuters) – British prime minister Boris Johnson once worried that his friendliness with Donald Trump would leave him out in the cold when Democrat Joe Biden took over the White House.

Instead, he can expect a warm welcome in Washington on Tuesday, as the trans-Atlantic leaders meet for wide-ranging talks intended to deepen ties that are expected to focus on security, climate and economic regulation in the run-up to Britain hosting a major environmental conference at the end of October.

It is a moment Johnson’s team regards as a triumph: validation that “global Britain” can thrive on the world stage after its divorce last year from the European Union. It comes amid a U.S. rift with EU rival France, in which Britain played a crucial part.

A submarine deal the United States and Britain recently announced with Australia came at France’s expense, sparking France to withdraw https://www.reuters.com/world/asia-pacific/australian-pm-says-he-made-clear-france-possibility-scrapping-submarine-deal-2021-09-17 its ambassadors to the United States and Australia and cancel https://www.reuters.com/world/europe/france-cancels-defence-meeting-with-uk-over-submarine-row-sources-say-2021-09-19 a defense meeting with Britain.

France continues to see Britain as the junior partner in the long-running “special relationship,” years after former British Prime Minister Tony Blair was ridiculed for supporting George W. Bush’s invasion of Iraq in March 2003, some say.

“The French are seeing this as quite strategic, part of a shift by America in particular coming on top of the Afghanistan humiliation, a shift of America away from really taking its European allies seriously and turning towards China … and Britain following on, Britain being the poodle,” said Peter Ricketts, a member of the House of Lords and former British ambassador to France.

For Biden, the alliance is focused on a pragmatic need to rise above differences in approach and style. Biden was angered at the time by Johnson’s comments https://www.reuters.com/article/britain-eu-obama-boris-idAFL5N17P42H characterizing his former boss Barack Obama as being opposed to Britain exit from the European Union because he was “part Kenyan.”

However, the two met amicably in June at a G7 meeting, where Biden told Johnson, who had recently wed his nearly three decades-younger third wife that “we both married way above our station.”

Johnson responded: “I’m not going to disagree with the president on that or indeed on anything else, I think, either, likely.”

There is room for each country to advance its interests. Both want to move beyond disagreements over the chaotic military withdrawal from Afghanistan.

Despite French concerns, they also want to build on the alliance with Australia, known as AUKUS, whose primary mission is to counter China’s regional influence. And they will look at ways to cooperate on the COVID response and climate change.

Johnson plans to press Biden to increase his contribution to meet an overdue spending pledge of $100 billion a year by rich countries to help poorer countries cut carbon emissions and cope with global warming.

“It will make a huge difference, and I think it will send a massively powerful signal to the world,” said Johnson.

A bilateral U.S.-British trade deal, long held out https://www.reuters.com/article/britain-eu-trade-trump-analysis/biden-or-trump-no-guarantee-of-a-post-brexit-u-s-uk-trade-deal-idUSKBN269255 by Johnson and his allies as a logical post-Brexit step, will likely have to wait though. Biden has not prioritized brokering new trade deals.

“The reality is that Joe has a lot of fish to fry,” Johnson told reporters traveling with him to the United States on Monday.