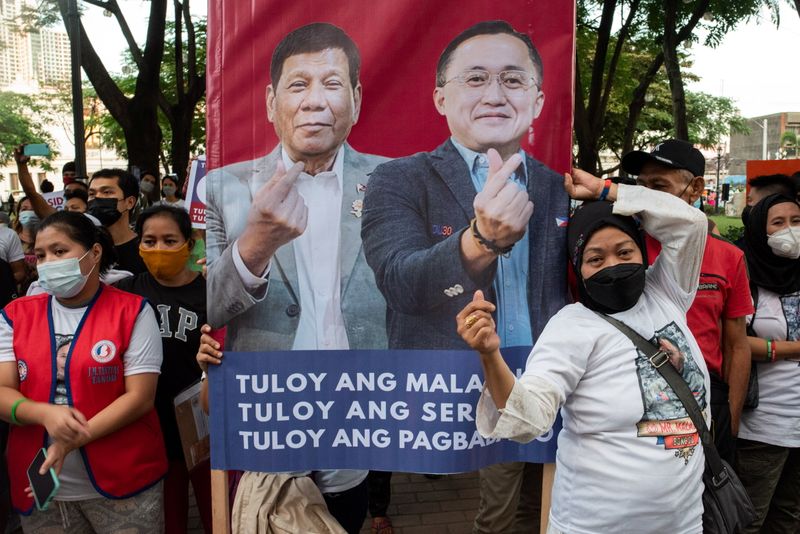 FILE PHOTO: Supporters of Philippine Senator Christopher “Bong” Go gather outside the Commission on Elections after he filed his certificate of candidacy for president for the 2022 national election, in Manila, Philippines, November 13, 2021. REUTERS/Lisa Marie David

MANILA (Reuters) – A deadline for Philippine political parties on Monday to finalise candidates for next year’s election is keeping voters on the edge with last-minute changes likely in unpredictable presidential and vice presidential races.

President Rodrigo Duterte, according to his spokesperson Harry Roque, will announce his election plans at the Commission on Elections’ office later on Monday.

Roque did not elaborate but Duterte’s communications chief said on Saturday he plans to register to run for vice president before the deadline, and challenge his daughter, Sara Duterte-Carpio, who is vying for the same position.

His 43-year-old daughter had been expected to run to succeed him as president. He is not allowed to seek re-election. However, she filed her candidacy for vice president despite leading opinion polls for most preferred presidential contenders.

Nevertheless, she could still change her mind.

It was not yet clear who Duterte-Carpio will run with, but presidential aspirant and son of late strongman, Ferdinand Marcos Jr. has said he wants her to be his running mate.

Dozens of supporters of Duterte-Carpio in green T-shirts, the colour associated with her, were outside the polling body’s office on Monday to make a last ditch attempt to convince her to change her mind and run for the presidency.

Candidates have until 0900 GMT on Monday to withdraw or switch positions by way of substitution.

The Southeast Asian nation of 110 million people holds elections in May 2022 for positions from president down to governors, mayors and local officials. The next government faces the uphill task of reviving a pandemic-battered economy.

The older Duterte’s choice of successor is his long-time aide, Senator Christopher “Bong” Go, who on Saturday quit the vice presidential race to run for the country’s top job.

Go will square off with more seasoned and popular rivals, like Marcos and boxing hero Manny Pacquiao, who are both ahead of him in opinion polls.

“Even though Go is not as competitive as Sara, Duterte has a lot of resources at his disposal and could count on the Mindanao base,” said Richard Heydarian, an author, columnist and academic who specialises in politics, referring to the southern Philippine island which is the base for both Duterte and his daughter.