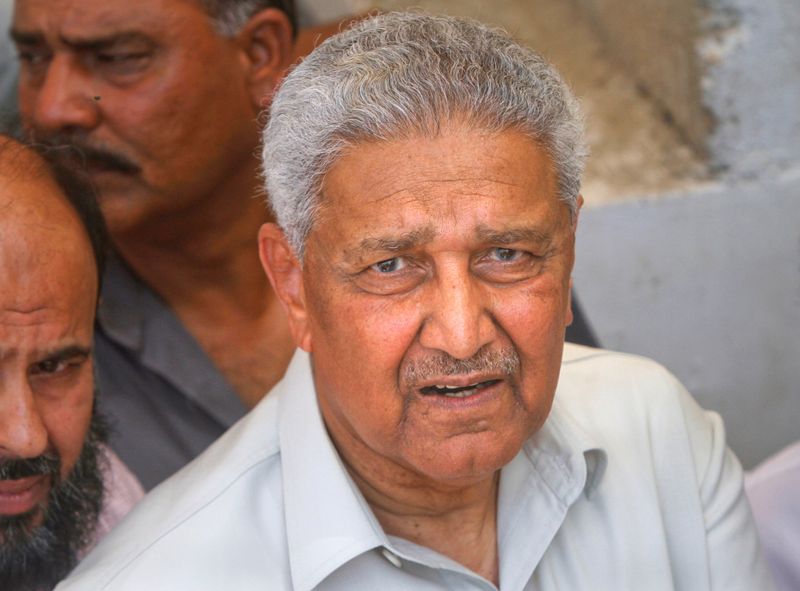 FILE PHOTO: Pakistani nuclear scientist Abdul Qadeer Khan is photographed after a silent prayer over the grave of his brother Abdul Rauf Khan, during funeral services in Karachi May 8, 2011. REUTERS/Athar Hussain

KARACHI, Pakistan (Reuters) -Abdul Qadeer Khan, a Pakistani nuclear scientist who acknowledged being part of a nuclear proliferation ring, died on Sunday. He was 85.

Khan was admitted to Khan Research Laboratories Hospital on Aug. 26 after testing positive for COVID-19 and was later moved to a military hospital in Rawalpindi, said the state-run Associated Press of Pakistan.

“He was loved by our nation bec(ause) of his critical contribution in making us a nuclear weapon state,” Pakistan’s Prime Minister Imran Khan on Twitter. “For the people of Pakistan he was a national icon.”

He was at the centre of a global nuclear proliferation scandal in 2004 that involved sales of nuclear secrets to North Korea, Iran and Libya. After a confession on national television, Khan was pardoned by then-president Pervez Musharraf but he remained under house arrest for years in his palatial Islamabad home.

In his confession, Khan said he acted alone without the knowledge of the state officials. However, he later said he had been scapegoated.

“He helped us develop nation-saving nuclear deterrence, and a grateful nation will never forget his services in this regard,” Pakistani President Arif Alvi said in a tweet.

Prime Minister Khan, who is not related to AQ Khan, said the scientist would be buried at Islamabad’s Faisal mosque, according to his wishes.