On Tuesday, and after significant backlash to Greene’s comments more or less forced the issue, Republican House Minority Leader Kevin McCarthy said that his conference “condemns this language,” and that “Marjorie is wrong, and her intentional decision to compare the horrors of the Holocaust with wearing masks is appalling.”
Rep. Steve Scalise, the second-most-powerful Republican in the House, gave a more watered-down statement through a spokeswoman, saying that he “does not agree” with Greene’s comments. (Both McCarthy and Scalise also used their statements as an opportunity to take a swipe at Democrats.)
It’s good that at least some of them are speaking out about the latest dangerous and bigoted comments from Greene, who is, unfortunately, not unique in a party that increasingly attracts xenophobes, misogynists, conspiracy theorists and crackpots. This is not all elected Republicans, of course, though the resounding silence in their political ranks after a statement like Greene’s surely implicates them. The party can choose a different and brighter future. Or it can continue to walk the dangerous path laid by the former president (and vocal Greene supporter), Donald Trump.
Republicans made a deal with the devil when they supported Trump for president, and after they saw how resonant his message of sexism, racism, anti-immigrant sentiments and alternate reality really was (though it failed to keep them in power) they continued to cling to it, in the process elevating shameful bigots and sycophants to positions of power.
Indeed, GOP leaders only condemned Greene after other members of their party and prominent conservatives — including those who were willing to tolerate high levels of Trump’s offensive behavior — publicly criticized her. That inability to call her out without drawing false equivalencies or insisting that the other guy does it, too, speaks to a cancer in the Republican Party and conservativism more broadly.
Greene is merely Exhibit A: It is not her first trip to crazytown, nor the first time she has let rip some seriously antisemitic or otherwise bigoted tripe.
The list of her statements — hateful (African-Americans are “held slaves to the Democratic Party”), prejudiced (George Soros, a Holocaust survivor, is a “Nazi”), conspiratorial (9/11 was a hoax, Democrats may be Satan-worshipping pedophiles), dangerous (suggesting that Nancy Pelosi could be executed for treason), or just downright bananas (that California wildfires were caused by a space laser controlled by the Rothschilds) –could take up this entire column.
The Republican leadership knows who Greene is and — the occasional condemnation of her aside — continues to support her and welcome her as a member of their party.
After all, this is the party that has mainly embraced the Big Lie, unrelentingly advanced by Trump, that he was the rightful winner of the 2020 election. And even those Republican Party members, like Wyoming Rep. Liz Cheney, who have rejected that particular nonsense, have refused to also reject the voter suppression legislation that has sprung from it.
Nor is Greene unique among her colleagues: Her comments are only grotesque examples of a tendency among too many of her colleagues to comfortably brush up against extremists. Scalise, the Louisiana congressman who offered only a tepid critique of Greene’s comments, himself spoke in 2002 to a White supremacist organization founded by former Ku Klux Klan leader David Duke. (Scalise was a state representative back then, and later denied knowing that the organization, called the European-American Unity and Rights Organization — or EURO — was connected to neo-Nazis.)
And in March, Republican Rep. Paul Gosar of Arizona, was the keynote speaker at a conference organized by a Holocaust-denying White nationalist. 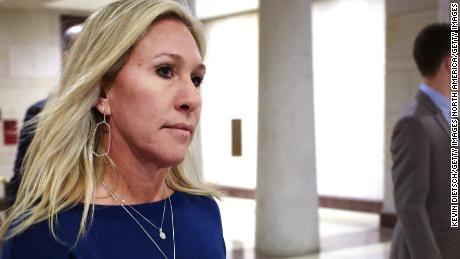 Gosar and Florida GOP Rep. Matt Gaetz also endorsed self-described “proud Islamophobe” Laura Loomer for Congress. Loomer became infamous for her anti-Muslim comments: she was kicked out of Uber after urging the company to allow riders to reject Muslim drivers, saying, “I never want to support another Islamic immigrant driver;” and, after 2,000 African migrants drowned in the Mediterranean, she tweeted, “Good. Here’s to 2,000 more.” Loomer won the Republican primary in Florida, but lost in the general election.
There are others.
One reading of the situation is that the GOP has not figured out how to solve the problem of winning elections without embracing the rabid base. But a more accurate understanding recognizes that any party’s voters are not an immovable block forever stuck in their unchanging ideas and opinions; rather, voters often change their minds or shift their opinions as their parties shift positions. That’s even more true in an era of hyper-partisanship, where political parties are teams representing not just a slate of policy prescriptions, but cultural identities and broader values.
Republican leaders could choose to actually lead their flock, rather than excusing, following and even elevating the most extreme among them.
The fact is, Republicans have a fantastic opportunity here. Trump is off of Twitter, which was his loudest megaphone, and so the conspiracy king has been muted — but that may not last forever, and it certainly doesn’t mean that his base has stopped pining for his return. But it does mean that that base can potentially be redirected.
The Republican Party has an off-ramp it can take right now — away from the conspiracy theorists, Jew-haters, Islamophobes, xenophobes, racists and reality-deniers. It won’t be easy, and it may cost the party some votes in the short-term, but the option is there. They could take it.
The sad, scary truth is that for all their words about the need for integrity and the wrongness of Greene’s comments, Republicans aren’t willing to change course. That’s not an indictment of the steadily terrifying Trump base. It’s an indictment of the party and its leaders.