Sure, some of the problems are real. But things are not nearly as bad as they seem; not for the president and not for the country. There’s time to make the kinds of adjustments that could quickly improve Biden’s prospects.
In CNN’s latest poll, Biden’s approval stands at 48 percent. That’s far from calamitous, although the trend is moving in the wrong direction for him. But the poll shows a significant weakening among those who say they “strongly approve” of his performance, and 58 percent say he isn’t paying attention to the most important issues. The drop in his support is real and requires a course correction.
Biden needs to correct misperceptions — especially about the economy — and he needs to recalibrate his stance on some key issues. He has lost some of the connection he made with voters who embraced him as a centrist leader who would not only restore a sense of normalcy and decency to the country, but would improve the lives of middle-class Americans of all political persuasions, working with leaders of both parties.
Even if you don’t believe CNN’s poll and think other more negative ones paint a more accurate picture, remember first-year opinion surveys can turn out to be outliers. I remember the early months of Bill Clinton’s presidency. He seemed destined for disaster. His approval collapsed from 59% in February 1993 to just 37% four months later, in Gallup polls. Clinton won reelection and finished his second term with an average approval of 61 percent.
Biden has not finished his first year, and his prospects already look better today than they did just a few days ago, since Congress approved major infrastructure legislation.
In fact, if the bill had been passed sooner, the conversation today would sound completely different. Every American has known for years the country is in dire need of large-scale infrastructure upgrade. Trump tried and failed to do it. Now Biden has. And it will benefit everyone, Republicans and Democrats. 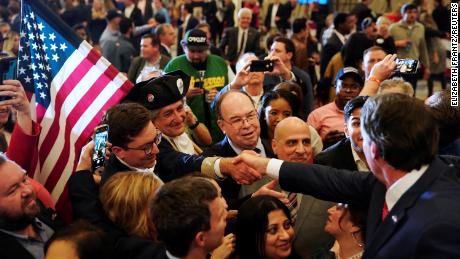 Infrastructure is not a sexy topic. But, as then-Vice President Joe Biden told former President Obama when he signed Obamacare into law, this one is a “big f—ing deal.” The administration needs to emphasize the content: roads, bridges, parks, internet. Better, safer roads, modernized transit systems, electric and hybrid buses, intercity rail service, etc. etc. It will make life easier, better, and will also create huge numbers of jobs and make American more competitive. It will boost the economy enormously.
Biden needs to become a better salesman. As CNN’s Jim Acosta noted, “If Trump had gotten an infrastructure bill after all those Infrastructure Weeks, he’d have been flying stealth bombers over the Lincoln Memorial and unveiling the Trump bridge in every swing district in America…”
Trump, of course, is the consummate marketing man. Biden needs to up his game in that department.
And it is nowhere more evident than in impressions about the economy.
The CNN poll found 38% of Americans say the economy is the most pressing problem facing the country. It’s the number one concern of Republicans and the second highest among Democrats, who worry more about the pandemic.
If Americans felt the economy is doing well, they would not call it one of the country’s most pressing problems. But the notion America is experiencing a grave economic crisis is simply false. The Biden administration has allowed Republicans and their mouthpieces in right-wing media — with some help from the rest of the mainstream media — to create the incorrect impression the economy is not doing well. Talk of “brutal” economic data is absurd hyperbole. And reports focusing exclusively on supply chain issues without noting the overall economy is growing, strongly miss the forest for the trees.
It’s true there are problems. Inflation is climbing and there are severe disruptions in supply chains. These are serious issues that must be addressed to prevent them from derailing the recovery. But they are to a large extent the result of unprecedented rates of economic activity on the heels of severe disruptions caused by the pandemic.
The unemployment rate is dropping faster than it ever has. Just look at this chart. Last week’s report of 4.6 percent unemployment is excellent by historical standards, and the US economy has arrived there much faster than predicted.
If Biden and Democrats want to improve their prospects for 2022 and 2024, they need to make sure people know things are, indeed, better for most Americans. The stock market is at all-time highs, and the median checking account balance today is 50 percent more than before the pandemic. 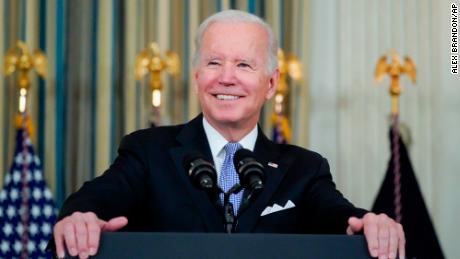 It’s not surprising people were disappointed in Biden when they went to the polls last week. Biden promised to bring the country together after four years of bitter acrimony under the previous president. Until 11:30 p.m. last Friday, it looked like he couldn’t even bring Democrats together.
The months of intra-party bickering among Democrats was an ugly — and pernicious — sight.
But now Biden has, in fact, produced a major bipartisan law. Democrats and Republicans supported it.
In the House, six of the most leftist Democrats voted against it. By doing that, they may have drawn a useful line for Biden.
Members of the so-called Squad advocate many policies Biden and millions of Americans support, but their inflexibility, their unwillingness to fall in line behind the president, are hurting Biden. Doing so reveals a stunning disregard for the cost of making Biden’s agenda crash. If Biden fails, the 2024 election could well bring an end to American democracy.
The President needs to re-sell himself to the country. He needs to remind middle America the policies he is pursuing are not radical, even if his opponents paint them so. They are aimed at improving living standards for all Americans. He needs to talk more about content, and when forced to discuss cost, make sure people understand they are part of a fiscally responsible package that will not add to the debt unlike (even the pre-pandemic) policies of the previous administration.
And he must erase the impression he is beholden to the most intransigent, most extreme members of his party.
Democrats can win only if they work together and convince others they’re working for all. Most Republicans today would not support a Democrat, but independents and the less-partisan conservatives are open-minded.
Biden has had some rocky months, but he has a very good chance of strengthening his position. In sharp contrast to his predecessor, Biden is uncomfortable boasting, but he needs to let people understand the magnitude of what he has achieved. The economy is mostly doing very well. He has scored important victories, and he is not a wild-eyed radical. If he does that, his approval ratings will climb as quickly as they fell.