For much of the past three decades, Powell served as perhaps the most well-known Black Republican in the nation, a four-star general who served as Ronald Reagan’s national security adviser, George H.W. Bush’s chairman of the Joint Chiefs of Staff and George W. Bush’s secretary of state. In each post, Powell made history by breaking racial barriers.
Powell’s previously unblemished legacy of military and political service suffered the scars of the 2003 invasion of Iraq. Powell’s public testimony as secretary of state about Iraq’s supposed possession, later proven false, of weapons of mass destruction helped to “sell” the war to the American public. To his credit, Powell publicly admitted that a massive intelligence failure led to his inaccurate testimony before the United Nations, and in essence, gave the entire world a “painful” stain on his political legacy.
Powell rebounded from this low point by emerging as the GOP conscience on matters of race and democracy. As the former party of Abraham Lincoln lurched ever rightward in the 21st century, Powell endorsed Barack Obama in 2008 and 2012, Hillary Clinton in 2016 and Joe Biden last year.
One can see in his biography reasons why Powell may have felt comfortable endorsing Democrats in this advanced stage of his life. The Harlem-born, Bronx-raised son of Jamaican immigrants and a self-described “problem solver,” Powell turned 35 years of service in the United States military into his own version of the American Dream.
He represented a brand of Black Republicanism with deep roots in the anti-slavery politics that birthed the 19th-century era GOP as the oft-described “party of Lincoln.”
In the 20th century following the Second World War, many Black Republicans were forced to navigate a perilous path between the pro-segregation politics of the Democratic Party and a GOP increasingly more dedicated, in many instances, to national security, the free market and capitalism than racial justice.
Powell was no exception in having to confront the shifts in his party on matters of race. Powell found his place in a Republican Party of the 1970s, which at the time supported affirmative action. Long after the GOP defected in the late 20th and early 21st centuries into a “pull yourself up by the bootstraps” rejection of such programs and policies, Powell continued to support them. 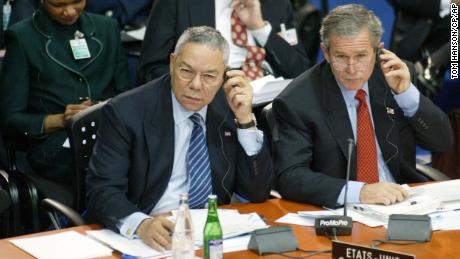 In that sense, Powell was one of a significant cohort of Black Republicans, such as baseball player Jackie Robinson and Richard Nixon adviser Arthur Fletcher (known as the “father of affirmative action”), who flourished during the postwar era within a Republican Party large enough to include vocal supporters of racial justice, Cold War hawks, fiscal conservatives and right-wing firebrands such as Barry Goldwater and Ronald Reagan.
Powell’s background as a soldier made him loyal to the Republican Party during years in the 20th century when Democrats began to be identified as supporters of anti-war movements and proponents of smaller military budgets. His military background also made him popular with conservatives and independents alike, despite the rise of Black neoconservativism, personified by Black Republicans (such as Justice Clarence Thomas) who rejected race-based legal, legislative and policy reforms once championed by the GOP.
When Powell passed the torch as secretary of state to Condoleezza Rice, another former national security adviser who enjoyed a closer personal relationship to President George W. Bush than Powell did and showed more comfort with aspects of the party’s rightward political shift, it was an important moment in the evolution of Black Republicanism within the GOP.
Powell could not stomach the presidency of Donald J. Trump, with its violation of democratic norms, while Rice failed to acknowledge the damage being caused by the GOP and Trumpism.
Colin Powell’s death reminds us of the relevance of Black voices within a Republican Party that in many ways no longer exists — one that valued a diversity of voices in representation and ideology. Powell’s brand of Black Republicanism supported a strong national security platform and a robust commitment to racial justice.
The “Powell Doctrine,” coined during the general’s command of the allied forces in the first Gulf War in 1991, was a pragmatic approach to American power. Powell’s leadership style earned the trust of soldiers, and later the American public, through a diplomatic yet forceful speaking style that inspired confidence.
These attributes led many to believe that Powell might become America’s first Black president. While he flirted with the idea of running for president in 1996 and 2000 as a Republican, Powell declined, perhaps through a better comprehension that his unifying comity might not be aligned with harsher voices within the GOP who, in the 21st century, came to drive the party down its fateful path toward Trumpism.
Powell’s death signals the end of an era. It closes one chapter in an imperfect effort by Black Republicans to preserve the GOP’s sacred 19th-century roots: eradicating slavery, advocating abolition, reviving democracy. Powell and many of his fellow Black Republicans struggled for decades to forge spaces within their party that could welcome Black conservatives who embraced anti-racism and social justice.
Powell’s fealty to this brand of Black Republicanism, brilliantly distilled in historian Leah Wright Rigueur’s “The Loneliness of the Black Republican,” made him more than the most famous Black soldier, general and statesman in American history.
His dignified insistence that Black life mattered on the domestic and national stage as well, even when his own party moved away from this vision, made him a truly Promethean figure. His mentorship and advocacy — alongside his support for racial justice efforts — modeled unparalleled leadership and commitment to civic democracy right up until his death.