And according to The Washington Post, Cheney, one of only 10 House Republicans to vote to impeach Trump in February, had also seen this happen at a leadership meeting the previous month. She feared that this refusal to share the full facts about the former President’s approval ratings could hurt colleagues running for reelection in 2022.
How could it happen that Republicans would be willing to play fast and loose with facts in a way that made Trump look good? You might call it the Michael Cohen effect.
Cohen is, of course, the former self-proclaimed “fixer” for Donald Trump who pleaded guilty to lying to Congress on Trump’s behalf and served federal prison time for it. Cohen has said that his former boss didn’t have to tell him when to use shady moves. He just knew when Trump wanted him to deceive and went ahead and did it.
“He speaks in a code,” said Cohen, “and I understand the code because I’ve been around him for a decade.” For the record, Trump responded in a 2019 tweet that Cohen “did bad things unrelated to Trump.” I side with Cohen when it comes to Trump’s way of letting folks know how he wants things done. Indeed, I don’t think there are many well-informed Americans ignorant of the fact that the former President is a demanding person who expects others to intuit his needs and act accordingly.
It seems that Republican leaders also have learned how to read the code. In the case of the NRCC data, they appear to have been handed an unrealistically positive assessment of the party’s prospects, perhaps because the headquarters staff knew that they weren’t supposed to tell the truth about Trump. The real numbers indicated that in those important districts where the party hoped to pick up House seats, “Trump’s unfavorable ratings were 15 points higher than his favorable ones,” the Post reported. Meaning, that instead of helping the GOP’s effort as it strives to gain some power in the next election, Trump is likely to hurt candidates’ prospects.
Cheney, who appears unwilling to decipher the code the way Cohen did, was ousted Wednesday from her House leadership role as GOP Conference Chair. 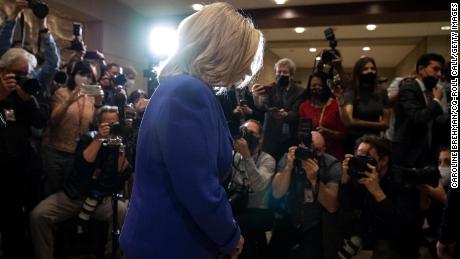 It’s no surprise to hear that Cheney wants the party to be fully informed of Trump’s negative impact. Cheney was the most prominent of the 10 Republicans to agree that Trump’s “incitement of insurrection” in the January 6 attack on the Capitol warranted impeachment. She has kept up her criticism of him ever since, becoming the Republican most identified with calls for the GOP to make a break with Trump. Along the way, she has chided House minority leader Kevin McCarthy for backing away from his initial, post-January 6, criticism of the former President, and she wants the party to abandon what she terms a Trump “cult of personality” and return to traditional conservatism.
Cheney’s outspokenness has earned her repeated attacks from Trump and a warning that he considers her defeat in a party primary one of his top priorities.
She is part of a Wyoming political dynasty — her seat was occupied by her father, former Vice President Dick Cheney, from 1979-1991 — but while she is a powerful political force in the state, Trump’s 69.9% win there in 2020 there was more than a point better than her own share of the vote.
Cheney likely knew that keeping up her effort to debunk the big lie that Trump was cheated of an election win would cost her position as the number three House Republican. “Republicans must decide whether we are going to choose truth and fidelity to the Constitution,” she wrote recently.
She doubled down on Tuesday night, telling the House: “The election is over. That is the rule of law. That is our constitutional process.”
So far, from Cheney’s perspective, democracy and the rule of law are losing. She refuses to join the vast number of her GOP colleagues who, like pre-prison Michael Cohen, understood what Trump wanted and gave it to him.
In time, Cohen realized that in his devotion to his boss he had endured a kind of “mental incarceration” that caused him to choose “a path of darkness.” He also said that, “many times I ignored my conscience and acted loyal to a man when I should not have … I was so mesmerized by Donald Trump that I was willing to do things for him that I knew were absolutely wrong.”
Trump’s mesmerizing skills are impressive. They have allowed him to bring in line almost the entire Republican establishment, despite his election defeat, the disgrace of the January 6 attack and two impeachment trials. Like Michael Cohen, GOP leaders are so much in his thrall that they can’t see the risks they are taking. Meanwhile, President Joe Biden’s approval rating has risen to 63% in an AP-NORC poll, from 61% in March. Trump, in contrast, never broke 50%.
But Republicans still go ahead and do his bidding, acting like the former President’s new fixers. They should look where it got Michael Cohen.