Biden, along with First Lady, Dr. Jill Biden, addressed members of the US Olympic team via a livestreamed virtual reception. President Biden praised all of our US Olympians — from those who took home the gold, to those who simply competed for our nation — telling them, “Thank you, thank you for the joy, the pride, the hope, the hope you gave us.” Biden added, “You make us look so good as a country.” After commenting on how proud their families must be of them, he invited them all to the White House, so, “I can brag more on you.”
Compare that to the increasingly bitter Trump, who appeared on Fox News Saturday night, where he continued to mock the US women’s Olympic soccer team as “woke” losers for not winning the gold medal but instead taking home the bronze. Trump stated, “Look at the soccer team, the women’s soccer team, they were supposed to win the gold medal.” The disgraced former President continued to baselessly claim the reason they lost was that they were “woke,” declaring, “The word ‘woke’ means loser. If you’re woke, you’re gonna lose.”
What made the team “woke” to Trump? On July 21, before a game with Sweden, all 11 starters of the US team — along with the Swedish team — took a knee as part of pre-planned demonstration against racism and discrimination. The US team lost that game and later lost to Canada in the semifinals before taking the bronze.
Trump’s comments Saturday echoed the statement he released Thursday, when the US women’s soccer team won the bronze. Instead of praising this accomplishment, he reveled in the fact the team didn’t win the gold: “If our soccer team, headed by a radical group of Leftist Maniacs, wasn’t woke, they would have won the Gold Medal instead of the Bronze.”
Apparently to Trump, you must support his views or you are deemed a “woke” loser. Here we have a former President of the United States gleeful that a US Olympic team didn’t win a gold medal because they don’t share his politics. 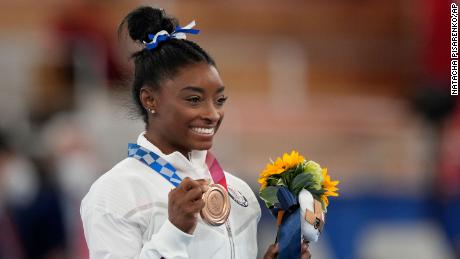 This is not the first time Trump has slammed athletes for bringing attention to systemic racism. For example, in 2017, Trump infamously slammed Black NFL players for taking a knee during the national anthem, calling them “sons of bitches” and demanding they be “fired.” He has previously had run-ins with one of the leaders of the US Olympic women’s soccer team, Megan Rapinoe, when in 2019 he told The Hill in an interview that it was inappropriate for her to take a knee during the national anthem before matches.
Overall, though, this is simply more of Trump reminding us that he only supports people who support him. When he was in the White House, Trump continually made us aware that he only cared about his base — while the rest of us were expendable. Nothing has changed with the man who lost the popular vote for President in 2016 and 2020.
This again is in sharp contrast to President Biden. At his presidential inauguration, just two weeks after Trump’s Jan 6 insurrection, Biden promised that he wanted to be “President for all Americans,” adding, “I will fight as hard for those who did not support me as for those who did.”
That’s why during his talk to the Olympians on Saturday, Biden didn’t tell them he only cheered for those who agreed with him politically. Biden is a real American President. He praised all the athletes, stating: “You handle yourself with such grace, and such decency, it just — you made me so damn proud.”
The United States is constantly evolving — and our Olympic team reflects that. Our nation’s first Olympic team in 1896 was comprised of 14 White men (sounds like a team Trump would’ve have loved). Flash forward to our remarkably diverse team in Tokyo, which saw great success, winning the most medals of any country. And it was our nation’s female Olympians who led our nation to success, taking home 66 medals of 113 won by Team USA.
Trump writes off swaths of this team as “woke.” The rest of us see it how President Biden expressed it Saturday to the diverse group of athletes who make up our Olympic team: “You remind us of what an amazing country we are.”