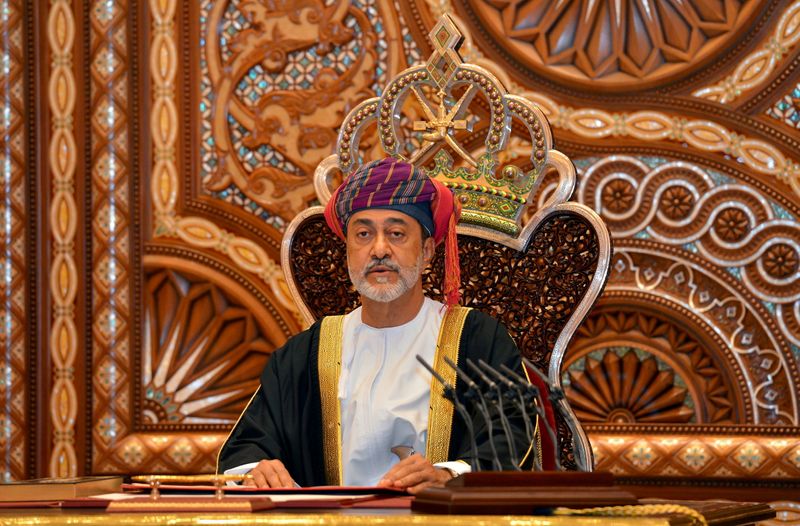 DUBAI (Reuters) – Oman’s Sultan visited Saudi Arabia on Sunday on his first official overseas trip since assuming power last year, with talks expected to focus on the Yemen war and economic and investment cooperation as Muscat looks to shore up its finances.

Sultan Haitham bin Tariq al-Said, whose country has joined United Nations-led efforts to secure a peace initiative in Yemen, arrived in the Red Sea city of NEOM for a two-day visit.

He was greeted by Saudi King Salman – in what Saudi-owned media said was the 85-year-old monarch’s first face-to-face meeting since the coronavirus pandemic began – and Crown Prince Mohammed bin Salman.

The sultan recently faced his biggest challenge with demonstrations against unemployment in the debt-burdened country, which is pursuing wide-ranging reforms and austerity measures.

He said the opening of a delayed new road linking the two Gulf states would facilitate logistics and other infrastructure projects.

Since the oil price crash in 2014, Oman’s debt to GDP ratio has leapt from about 15% in 2015 to 80% last year, while Oman’s plans to diversify revenue away from oil and to reduce spending on its bloated public sector have made slow progress.

Oman is among the weakest financially among the Gulf oil producers but has long played the role of facilitator in efforts to resolve regional conflicts because of its neutral foreign policy.

The sultanate, which shares borders with Yemen, has intensified diplomatic efforts aimed at securing a ceasefire between Yemen’s Iran-aligned Houthi movement and the Saudi-led coalition that has been battling the group for more than six years.

Talks between the coalition and the Houthis are focused on steps to lift a blockade on Houthi-held ports and Sanaa airport in return for a promise from the Iran-aligned group for truce talks.

The coalition intervened in Yemen in March 2015 after the Houthis ousted the internationally recognised government from the capital, Sanaa. The war has killed tens of thousands of Yemenis and pushed the country to the brink of famine.