Share
Tweet
Share
Share
Email
Comments
The field of more than a dozen candidates includes former Ohio state Treasurer Josh Mandel, former Republican state party Chair Jane Timken, businessman Bernie Moreno, state Sen. Matt Dolan, businessman Mike Gibbons and J.D. Vance, author of the New York Times bestselling book “Hillbilly Elegy.” Trump has not yet endorsed anyone in the race.
The desire to set themselves apart as they worked to be seen as the most Trump-like was on display at a candidate forum this week. 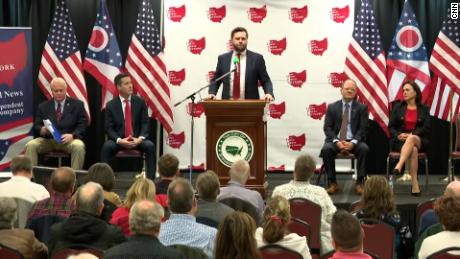 There, six of the candidates slammed the Democrat-led voting rights bill the For the People Act and vaccine mandates and reiterated their emphatic support for Trump — with some repeating the lie that the 2020 election had been “rigged” and “stolen.”
Vance, the most well-known of the candidates, blatantly lied about 2020, claiming that the tech industry had worked with Democrats to rig the election.
“That’s why we have the disaster we have instead of a second term of Donald Trump,” he said.
Mandel made similar claims.
“Every time they try to cancel me, I say it louder and louder. So let me say this very, very clearly: I believe this election was stolen from Donald J. Trump,” he said.
Moreno wanted to assure the crowd he also believed the election was stolen, challenging Mandel’s assertion that the former treasurer is the only one in the race who consistently makes the false claim.
“I’ve said that every time. Maybe you showed up late then too and you didn’t hear me,” Moreno said to Mandel.
Trump won Ohio in both 2016 and 2020, and his support could be key in the competitive primary.
“The President is very popular in Ohio, rightfully so. He did some great things for Ohio. He did some great things for the country, so of course we welcome his endorsement, much like the Democrats would welcome Joe Biden and Hillary Clinton’s endorsement and Barack Obama’s endorsement,” Moreno told CNN.
Vance — once a Trump critic who wrote in a since-deleted tweet that Trump was “reprehensible” — now emphatically praises the former President.
The Middletown native views focusing intensely on cultural conflicts as the path to victory for Republicans across the country.
“For so long, I think Republican officials have been worried that the culture wars are the electoral enemy or at least a weakness for them, and yet it turns out that a lot of our voters are voting around things like whether their kids are being indoctrinated in schools or whether their kids are being told that there are 40 or 50 or 80 genders,” Vance told the far-right media outlet Breitbart News earlier this month.
Vance declined CNN’s requests for an interview.
Shannon Burns, who leads the Republican Party in Strongsville, said he is leery of Vance’s reversal.
“I’m suspicious. I think everyone should be suspicious. You hear it, in his own words, what he was saying against President Trump in a way that wasn’t policy-driven. He was clearly a self-proclaimed never Trumper,” he said.
Burns credits Trump with transforming the GOP in the Buckeye State.
“He has done something for the Republican Party in Ohio that no other candidate has ever been able to do. And that is decisively turn Ohio from what was a purple state, or in some years maybe a blue state, to a hard red state,” said Burns.
Timken suggested she’s working to build a coalition that includes both Trump loyalists and non-Trump Republicans.
“I am the candidate that can build a winning coalition of the Trump supporters and the education parents and bring back those suburban voters … in order to not only win a primary but win the general election. You have to be a candidate of addition,” Timken said Tuesday in an interview in her Columbus campaign office.
Her office includes a picture of her with Trump and a large cartoonish banner with the 45th President atop a military-style tank surrounded by fireworks and the American flag.
Timken said that top of mind for Ohio voters are inflation and the state of the economy. She took a subtle dig at the more incendiary tactics of her rivals:
“You can’t win a race in Ohio on Twitter. That’s not how you win races in Ohio. … Saying outrageous things to garner attention is not how I’m going to run this race and not how I’m going to win this race.”
Dolan is the only Republican candidate not seeking Trump’s endorsement. He doesn’t criticize the former President but says the race should be narrowly focused on policy.
“President Trump’s not going to vote in May of 2022; Ohio Republicans are going to go to vote. And when they look at what I’ve been able to do, my conservative results here in the state Senate … they’re going to see that those are good Republican ideals that help Ohio grow,” Dolan said to CNN.