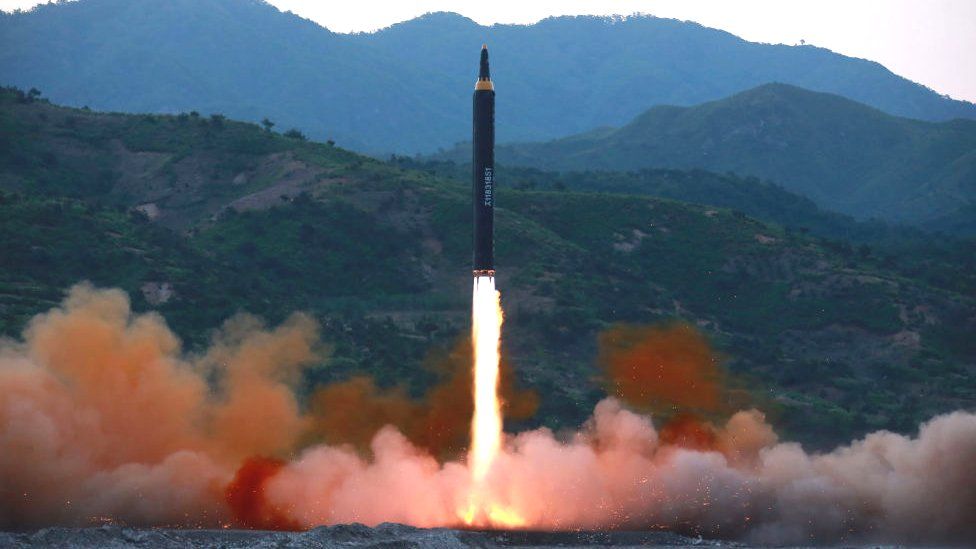 The suspected missile was fired from an airfield outside the capital Pyongyang.

The airfield has been the site of several launches, including previous tests of what were the US alleges were intercontinental ballistic missiles (ICBMs).

It comes as North Korea has in recent weeks stepped up its weapons testing.

“North Korea fired an unknown projectile from the Sunan area around 09:30 today, but it is presumed that it failed immediately after launch,” Seoul’s Joint Chiefs of Staff said in a statement.

Specialist news site NK News cited witnesses as saying loud “blowing” sounds, similar to that of a large aircraft, were audible in Pyongyang, followed by a loud “crash”. It added that it had seen an image showing a red-tinted ball of smoke in the sky above the capital.

Speaking to NK News, senior fellow at the Carnegie Endowment for International Peace Ankit Panda said this image was consistent with that of a “catastrophic failure”. He added that “reddish-orange smoke” is associated with liquid fuel – something that is “very toxic” to humans.

North Korea has so far carried out nine weapons tests this year, including what the US claims were tests of parts of a new ICBM, saying they were likely to have been experimental launches before a probable full-range ICBM launch.

With a minimum range of 5,500km (3,417 miles), ICBMs can reach the US. They are designed for nuclear arms delivery.

The UN prohibits North Korea from ballistic and nuclear weapons tests, and has imposed strict sanctions.

The North had put a moratorium in place on testing long-range ballistic missiles and nuclear tests after talks with then US President Donald Trump. But in 2020, Mr Kim announced he was no longer bound by this promise.

Pyongyang has however, maintained that the launches on 26 February and 4 March were focused on developing a reconnaissance satellite.

Each launch does help scientists learn what works and what doesn’t. But this is a big year for Kim Jong-un. It’s his 10th year in charge, he will want success not failure

Also as one expert pointed out – at what point did this launch fail.

It was launched at the country’s main airport, Sunan. Any major explosion near the ground could damage the airport.

And any explosion further up could risk debris falling on populated areas. We will know more after further analysis by US and South Korean defence ministries.

Either way, it is unlikely this failure will deter North Korea. Kim Jong-un has a wish list of weapons – he will press ahead.