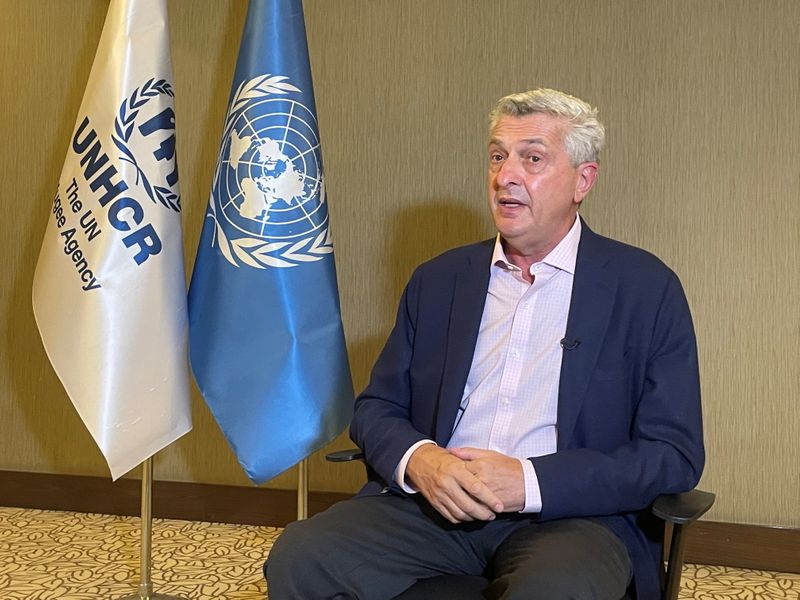 GAZIANTEP, Turkey (Reuters) – The Taliban victory in Afghanistan has not led to a dramatic refugee exodus but the country urgently needs humanitarian aid to prevent economic collapse and major upheaval, the U.N. refugee agency chief said on Friday.

Half a million people had been displaced within Afghanistan in recent months, U.N. High Commissioner for Refugees Filippo Grandi said, a number which would grow if health services, schools and the economy break down.

“In reality we have not seen at this point large movements of Afghan people towards the borders of the country,” Grandi told Reuters. “What we continue to see is a very dramatic phenomenon of internal displacement.”

Even before the Taliban launched its final push to seize control, three million Afghans were already displaced in a country struggling with drought and the COVID-19 pandemic, and where nearly half the population received some form of aid.

“We are really worried…(about) the economic conditions, basic services like education and health. If those things collapse then we have a massive humanitarian crisis on our hands and most likely massive displacement as well,” Grandi said.

The first signs of such a crisis were already visible, with people struggling to buy basic goods and concerns growing over medical supplies. There was a need to “really scale up massively” a sustained humanitarian operation, he said.

The UNHCR said two weeks ago that up to half a million Afghans could leave their homeland by the end of the year in a worst-case scenario.

Asked how many people may flee in the event of economic collapse, Grandi said it was “anybody’s guess at that point”.

“NO FAN OF WALLS”

Grandi said he hoped to visit Afghanistan soon for talks with the Taliban, who announced an interim government on Tuesday which included veterans and hardliners from the Islamist group and was greeted by many countries with caution or dismay.

He also called on Western donors to support countries neighbouring Afghanistan which already host millions of Afghan refugees, and urged countries not to resume deportation of Afghan migrants once transport links with Afghanistan resume.

Most flights in and out of Afghanistan ended when U.S. troops pulled out at the end of August, but Qatar and Turkey have been trying to restore operations at Kabul airport.

Grandi held talks on Wednesday with Turkish President Tayyip Erdogan, whose country hosts an estimated 300,000 Afghans as well as 3.6 million Syrian refugees – the largest refugee population in the world.

Turkey, which borders Iran, Iraq and Syria on its eastern and southern flanks and Greece and Bulgaria to the west, is also a transit route for migrants trying to reach the European Union from Afghanistan and the Middle East.

Erdogan, whose political support has taken a hit over the large refugee presence in Turkey, has said he will not allow Afghanistan’s turmoil to be an excuse to turn the country into a “migrant storage unit” for the European Union.

Turkish authorities are building a wall along the eastern border and stepped up patrols to intercept migrants.

“I told Turkey, as I told everyone else, that I’m not a big fan of walls,” Grandi said. It was a country’s “sovereign right” to keep its own people secure, but walls should not keep out “people that desperately need solidarity and protection.”