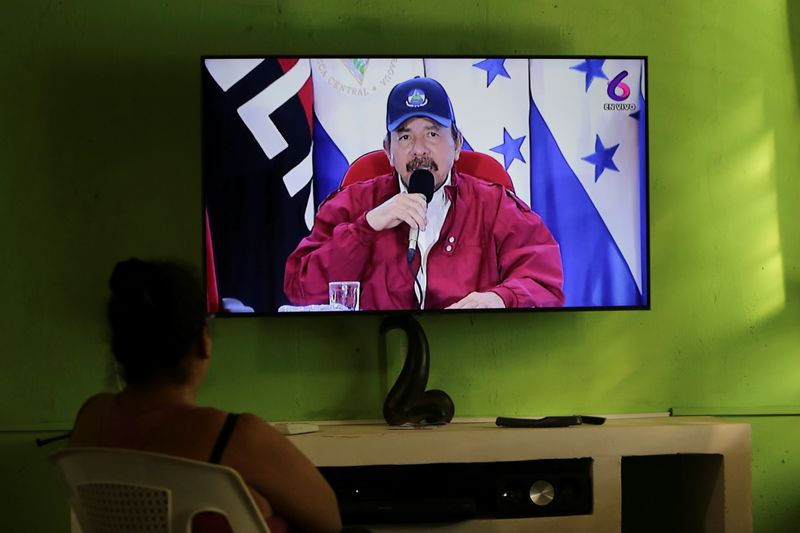 FILE PHOTO: A woman watches a televised speech by Nicaraguan President Daniel Ortega during an event where he agreed with his Honduran counterpart Juan Orlando Hernandez to define their borders in the Caribbean Sea and the Pacific Ocean, including the Gulf of Fonseca, which they share with El Salvador, in Managua, Nicaragua October 27, 2021. REUTERS/Maynor Valenzuela

MEXICO CITY/WASHINGTON (Reuters) – Nicaraguan President Daniel Ortega runs for a fourth consecutive term on Sunday in an election seen in Washington as a sham that looks certain to cement his hold on power and deepen the struggling Central American country’s international isolation.

The Biden administration is preparing to ramp up sanctions to protest the one-sided vote, but it must tread carefully to avoid encouraging economic migration or a destabilizing upheaval in the second-poorest country in the Americas.

The increasingly authoritarian stance of Ortega, a former Marxist guerrilla who helped topple the U.S.-backed Somoza dictatorship in 1979, has upset Washington and its allies, which increasingly see him in the same camp as the leaders of Venezuela, Cuba and Russia.

Since the last election in 2016, Ortega has abolished presidential term limits, expanded his family’s business empire and piled pressure on independent media. In recent months he has jailed opposition contenders, activists, journalists and business leaders. Other critics have gone into exile.

“Another autocracy taking root at our doorstep is the last thing we need in this hemisphere right now,” a U.S. official said on condition of anonymity.

The United States has imposed sanctions and travel bans on Nicaraguan officials, including Ortega’s relatives, while working to root out corruption and poor governance in nearby Guatemala, El Salvador and Honduras.

Secretary of State Antony Blinken has accused Ortega and his wife, Vice President Rosario Murillo, of organizing a “sham election” in an effort to establish an “authoritarian dynasty,” a rebuke echoed by his European Union counterpart.

Ortega, the longest-serving leader in the Americas, said in June that sanctions would not deter him and his government was upholding the law by arresting people conspiring against him.

He accused Washington in July of trying to undermine the elections and of seeking to “sow terrorism again” in Nicaragua.

Murillo, the spokeswoman for Ortega and his government, did not reply to a request for comment.

Suspending Nicaragua, which sends about half its exports to the United States, from the CAFTA-DR trade pact would be legally complicated and could worsen the country’s humanitarian plight, potentially spurring more people to leave for the United States.

Given splits in the region over how to address the situation, analysts doubt whether President Joe Biden can convince many other countries to take action.

Seven nations – including Mexico, Argentina, Guatemala and Honduras – abstained from voting in October on an Organization of American States (OAS) resolution expressing alarm at the Ortega administration’s attempts to undermine the election.

One U.S. official said Nicaragua’s neighbors may need to “step up to the plate” to help isolate Ortega.

The prospect of Russia expanding its influence in Latin America beyond Cuba and Venezuela also worries Washington.

Ortega recently showed off his ties to Russia in a televised speech surrounded by several dozen buses from the Russian government sent to bolster Nicaragua’s public transport.

John Bolton, while national security advisor for then-President Donald Trump in 2018, lumped Nicaragua in with Cuba and Venezuela as a leftist “troika of tyranny” in the Americas.

Since then Ortega’s political crackdown has only intensified. Between May and September alone, his disapproval rating rose from 46% to 69%, a CID Gallup poll showed.

Ortega has also blocked journalists – including Nicaraguans – from entering the country.

After the election, analysts say global attention may shift to pressuring Ortega to release political prisoners and end the crackdown on dissent that began with a response to street protests in 2018 and has left at least 300 people dead.

Ortega, some U.S. officials and analysts say, may use detainees as bargaining chips in an attempt to stave off further sanctions.

For now, many Nicaraguans say they will feel powerless on election day. The several candidates who made it onto the ballot are largely unknown, and critics call them Ortega loyalists.

“They appear in front of the camera, and everyone says, ‘Who is that?’” said Edgar Parrales, a former Nicaragua ambassador at the OAS.

Sherly, 25, who said her mother has been in jail for over a year for protesting against Ortega, plans to stay home.

“I’m not participating in this electoral circus,” she said.

(Reporting by Matt Spetalnick in Washington and Daina Beth Solomon and Jake Kincaid in Mexico City; Editing by Dave Graham and Daniel Wallis)