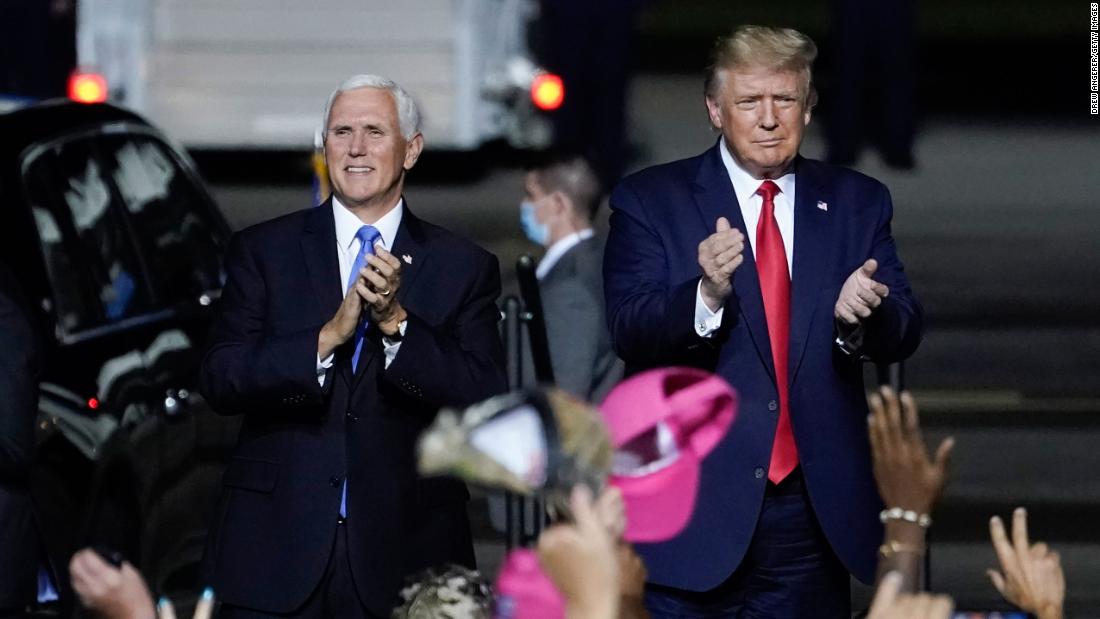 The fresh evidence also shows what many people in Trump’s inner circle knew in January: His case to stay in power was meritless, but an unchained commander in chief chose to listen to acolytes pushing wild conspiracies. Some of those who knew the truth refused to speak up, even as American democracy came under attack.
Just this week, it’s been revealed that:
This growing paper trail, which is likely to be of intense interest to the House select committee investigating the January 6 insurrection, appears to prove Trump’s intent to stay in power illegally. The record is beginning to add up to an extraordinary indictment of the ex-President’s abuses of power and one of the darkest moments in US history.
In the fraught days after the election last year and after the Capitol insurrection, many observers were unwilling initially to use the word coup — aware of the explosive nature of such language. The surreal experience of watching an assault on constitutional guardrails once thought inviolate also was, at times, hard to process. And skeptics of the coup terminology also suggested that Trump’s efforts were little more than madcap and incompetent political theater.
Yet the conspiratorial and at times clownish attempts to overturn the election — especially by Trump’s legal team — don’t make an unprecedented effort to destroy America’s democratic traditions any less mendacious.
The newly disclosed information builds on what was already known about what appears to be an expansive multi-front effort to destroy a peaceful and just transfer of power. The ex-President, for instance, initiated a vast disinformation campaign that has convinced millions of voters the election was stolen, helped by a pliant conservative media pushing his lies.
Last month, it emerged that Trump had tried to pressure the Justice Department to declare election fraud and leave the business of stealing power to him and his congressional allies. Trump, of course, instigated another aspect often seen in coups against legitimate power — a mob — by inciting supporters who invaded the Capitol.
His corrupt behavior initiated a flurry of new election laws passed in Republican-run states that could make it easier for Trump or a like-minded constitutional arsonist to steal power in the future. And he is endorsing rafts of candidates for state offices like secretary of state, creating a potential pool of local officials who could be minded to interfere in a future election.

‘The real problem for American democracy’

Perhaps the most concerning aspect of the torrent of revelations is that the danger to American democracy has not passed. It is only accelerating.
In the letter to Raffensperger, Trump made the absurd request that the official start the process of decertifying the 2020 election. There is no such mechanism to do so. Biden’s win has long since been legally and constitutionally ratified. And many of Trump’s allegations appear to show that he is now completely convinced of his own lies and propaganda — a fact that surely raises questions about the mindset of a former President who may be contemplating a future run for the White House.
But Trump’s conduct is already infecting the integrity of the 2022 midterm elections, since he has effectively wielded his robust standing with his party to make acceptance of his election lies a qualification for entry to GOP races. A Trump 2024 run would likely subject democratic values to an even greater assault.
All of the lies also have a tangible effect. A CNN poll last week, for instance, found that 78% of Republicans do not believe that Biden won last November and is therefore not the legitimate president.
“The real problem is we have one of the two legacy parties that is completely bought into this and doesn’t want to hear anything else but a confirmation of that untruth that has been told and that, I think, is the most dangerous thing facing our democracy,” Matthew Dowd, a former strategist for ex-President George W. Bush, told CNN’s Erin Burnett on Tuesday.
The book by Woodward and Costa that was published on Tuesday after days of dripped-out revelations includes a new story about conservative lawyer John Eastman, who came up with a scheme to try to convince Pence to throw out electors from seven states where Republicans falsely claimed election irregularities and to declare Trump the winner during the election certification process that was ultimately disrupted by the insurrection.
The plan anticipated “howls” from Democrats — a stunning understatement since the process effectively mandated the stealing of an election. So the memo contained a backup plan for Pence to say that no candidate had reached 270 electoral votes, so the election should be turned over to the House of Representatives, CNN’s Jamie Gangel and Jeremy Herb report.
Such a step would initiate a constitutional tie-breaker in which each state delegation would get one vote. Since the GOP controlled 26 state delegations, a majority could vote for Trump to win the election.
The plan was met with great skepticism by two of Trump’s allies on Capitol Hill, Sens. Lindsey Graham of South Carolina and Mike Lee of Utah, Costa and Woodward report. But that hasn’t stopped the former President and his henchmen from continuing to claim that Pence simply elected not to use power inherent in his office.
Of course, that authority does not exist.
Eastman told CNN that the memo was only a preliminary draft. But that did not stop Trump using it to try to convince Pence to keep him in power or fueling false beliefs inside the conservative movement that Trump is the rightful president. In any event, Pence wrote a letter on the morning of January 6 saying that he did not have the authority to intervene to change the election result, even as Trump said at his pre-insurrection rally that the vice president should have the “courage” to act.

The antithesis of democracy

The most stunning aspect of these reports is that Trump and some people around him actually believed that a US election could simply be disregarded if the President didn’t like the result — the very antithesis of democracy.
While the scheme that Trump preferred did not play out, it most alarmingly appears to sketch a road map under which several states in a future race could prevent the certification of elections to deprive a candidate like Biden of the 270 electoral votes needed to win the presidency.
The New York Times’ report said the Trump campaign had already concluded that outlandish claims that voting machines had been interfered with — which were aggressively pushed by the ex-President’s lawyers — were not true. But the campaign did not apparently feel a civic or moral obligation to say so. Later media appearances by Rudy Giuliani and another pro-Trump lawyer, Sidney Powell, expanded the conspiracy theories — and Trump weaponized the claims to further his lies about election fraud.
And in another nugget from “Peril,” Costa revealed Tuesday on CNN that Trump had dismissed the idea that his legacy could be best served by accepting his loss, in a conversation with his confidante Hope Hicks.
“I don’t care about my legacy. My legacy doesn’t matter. If I lose, that will be my legacy. My people expect me to fight and if I don’t, I’ll lose them,” Trump said, according to the book.
That attitude — rooted in a lie and a president’s own flawed character — is what appears to be still motivating Trump’s ever more fevered claims of stolen votes, and possibly a new bid to regain power. And it explains why the danger stalking American democracy has far from passed.