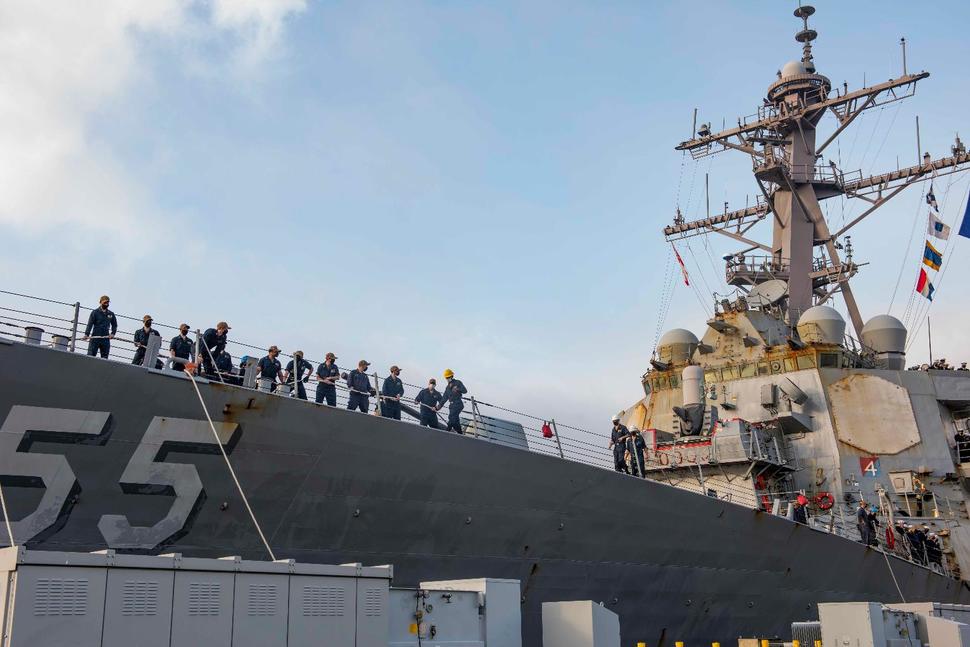 BATH, Maine (AP) — The Navy’s speedy littoral combat ships had propulsion failures. The gun on its stealthy destroyer is a dud because of expensive ammo. Its newest aircraft carrier had problems with the system that launches aircraft.

On top of that, embarrassing photos of rusty ships online have underscored delays in maintaining warships, made worse by the pandemic.

The Navy’s troubles have caused delays and cost billions of dollars. They come as tensions are growing in the South China Sea, Russia’s navy is emboldened, Iranian speedboats are harassing vessels in the Persian Gulf.

“Are we ready to meet the threat from China? No,” said Loren Thompson, a defense analyst at the Lexington Institute.

Adm. Mike Gilday, chief of naval operations, insists the Navy is now on a “positive trajectory” but the Navy will have to rebuild confidence under congressional scrutiny as it prepares a new strategic plan that’ll include another long-term investment: unmanned vehicles. The Biden administration is readying a Navy budget proposal this week to send to lawmakers.

The Navy fleet currently falls shy of 300 ships, despite a stated goal of 355 ships. The Chinese fleet now outnumbers the U.S. Navy.

“The Chinese are closer to our goal than we are,” said Republican Sen. Susan Collins of Maine, who sits on the Appropriation Committee and wants to boost Navy spending.

Democratic Sen. Jack Reed and Republican Sen. Jim Inhofe, chairman and ranking member of the Armed Services Committee, have criticized delays and cost overruns on lead ships, and urged the Navy to ensure technology is ready before putting it aboard.

Members of Congress, who control the purse strings, say the Navy must also spend billions of dollars more in its public shipyards that maintain the ships.

“The Navy has got to get their derriere in gear,” said Rep. Rob Wittman, a Republican from Virginia, who described the Navy as “at one of those crossroads.”

The Navy’s problem, as Thompson sees it, is that leaders rushed ambitious new ship classes to production and started construction before designs were finalized and technology fully tested.

“It tried too hard to leap ahead technologically at the beginning of the last decade,” Thompson said. “As a result, every vessel that it started had severe problems.”

For example, the electric-drive Zumwalt, commissioned in 2016, was designed to get close to shore to bombard land targets. But its 155mm advanced gun system is being scrapped because each rocket-propelled, GPS-guided shell costs nearly as much as a cruise missile.

Meanwhile, two versions of the speedy littoral combat ship were envisioned as chasing down pirate ships off Somalia. One version had class-wide propulsion problems, and both were criticized as too lightly armored for open ocean combat. The Navy is already scrapping the first four of them.

The most expensive ship in Navy history, meanwhile, is the newest aircraft carrier, the USS Gerald Ford. It has had problems with the system that launches jets and the elevators that move weapons, among other things. It was supposed to cost $10.5 billion but the price tag has risen to $13.3 billion and “four weapons elevators are still not finished and the reliability of key systems is low,” said Inhofe, a Republican from Oklahoma.

These ship classes have taught the Navy costly lessons. Costs on the first ships in the classes were 23% to 155% — or about $5 billion – higher than original estimates, according to the Congressional Budget Office.

“Congress has mandated the Navy not put the cart before the proverbial horse by requiring system integration between platforms and new technologies and fully testing prior to rolling out new programs,” said Sen. Mazie Hirono, a Hawaii Democrat and chair of the Armed Services seapower subcommittee.

Lawmakers have scrutinized the Navy’s readiness and overextended crews since 17 sailors were killed in two separate collisions involving Navy destroyers in 2017. Technology failure and human error factored into both collisions.

The Navy’s unceasing tempo continues to cause stress on ships and crew. Photos of the USS Stout, an Arleigh Burke-class destroyer, showed plentiful rust as it returned from a 210-day deployment last fall to Norfolk Naval Station in Virginia. The rust was cosmetic but underscored the toll of deferred maintenance and long deployments on ships and sailors, who made no port calls during the pandemic.

“It’s wearing out the Navy, the crews, their personnel, their families,” said Matt Caris, a defense analyst at Avascent, a consulting firm in Washington, who said investments are needed in sailors, maintenance and new ships.

“Deferred maintenance is never a good idea,” he said.

Speaking at Navy shipbuilder Bath Iron Works on a recent afternoon, Gilday insisted things are getting better. The length of time that ships were delayed has declined by 80% at public shipyards and 60% at private yards compared to where things were 18 months ago, Gilday said.

And those ships that suffered delays and cost overruns hold potential. The stealthy Zumwalt destroyer built at Bath Iron Works will be the first naval vessel equipped with hypersonic missiles, he said.

“I’m not saying that we’re satisfied with where we are,” Gilday said. “What I will say is that I think that certainly the trends are headed in the right direction.”