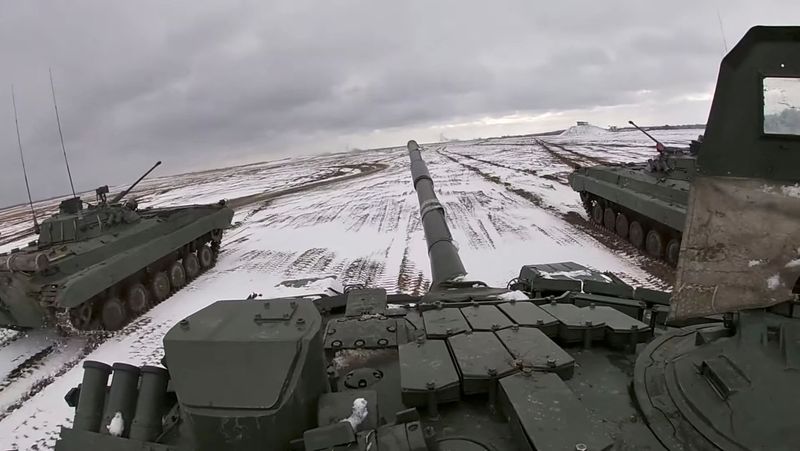 Tanks ride during joint exercises of the armed forces of Russia and Belarus as part of an inspection of the Union State’s Response Force, at a firing range in Belarus, in this still image from a handout video released February 2, 2022. Russian Defence Ministry/Handout via REUTERS

By Pavel Polityuk and Dmitry Antonov

KYIV/MOSCOW (Reuters) -Russia accused the United States on Thursday of ramping up tensions and ignoring Moscow’s calls to ease a standoff over Ukraine, a day after Washington announced https://www.reuters.com/world/europe/kremlin-mocks-britains-utterly-confused-johnson-before-putin-talks-2022-02-02 it would send nearly 3,000 extra troops to Poland and Romania.

NATO meanwhile said Russia had stepped up deployments to Ukraine’s northern neighbour Belarus in recent days and was expected to have 30,000 troops there for joint military drills that the White House called an escalation.

Russia has massed more than 100,000 troops on the Ukrainian border and Western countries say they fear Moscow may be planning to invade.

Russia denies this but has said it could take unspecified military action unless its security demands are met.

“It’s obvious that these are not steps aimed at de-escalating tensions, but on the contrary they are actions that lead to increasing tension,” he said.

“We constantly call on our American counterparts to stop aggravating tensions on the European continent. Unfortunately, the Americans continue to do so,” he said.

Washington and NATO have rejected Russian demands to bar Ukraine from joining NATO and withdraw allied forces and weapons systems from eastern Europe, while expressing a readiness to discuss arms control and confidence-building measures.

Adding to the international concern that Russia might be gearing up for war, U.S. intelligence officials believe Moscow has formed a plan to fabricate a pretext for an invasion, said a senior official in the administration of President Joe Biden.

The pretext options include creating a fake video to show the purported graphic aftermath of an explosion that would be pinned on Ukraine or its allies, the official said.

There was no immediate response from Moscow. It has denied accusations in the past that it is trying to manufacture a conflict.

Western concerns also focused on the Russia-Belarus exercises, running until Feb. 20, which have provided Moscow with cover to further increase forces near Ukraine. It has described the Allied Resolve exercises as a rehearsal for repelling external aggression https://www.reuters.com/world/europe/belarus-says-joint-drills-with-russia-run-feb-10-20-2022-01-18 and says its forces will withdraw after the drills.

In Brussels, NATO Secretary-General Jens Stoltenberg said there had been a significant movement of Russian military forces into Belarus in recent days.

Russian Defence Minister Sergei Shoigu arrived in Belarus on Thursday to inspect Russian and Belarusian troops and was due to meet Belarusian leader Alexander Lukashenko.

The Belarusian defence minister released images from the exercises showing troops parachuting to the ground, fighter jets in the sky, soldiers dismounting from a helicopter holding weapons, and tanks firing and manoeuvring.

Belarus, which has 9.5 million people, shares its western border with NATO members Poland, Lithuania and Latvia, while Ukraine lies to its south.

Russian President Vladimir Putin said on Tuesday the West had ignored Russia’s main concerns and accused the United States of trying to lure it into war, but he said Moscow was still interested in dialogue.

The Pentagon said the aim of the U.S. troop reinforcements was to send a “strong signal” to Putin.

Support for Russia came from China. Their two foreign ministers “coordinated their positions” during a meeting in Beijing on Thursday, the Chinese foreign ministry said.

China expressed understanding and support for Russia’s position on security regarding Russia’s relationship with the United States and NATO, it said.

Putin will meet Chinese President Xi Jinping on Friday before attending the opening ceremony of the Beijing Winter Olympics.

In Kyiv, Turkish President Tayyip Erdogan held talks with his Ukrainian counterpart Volodymyr Zelenskiy and repeated that Ankara was ready to do what it could to resolve the crisis. He offered to host a meeting between Putin and Zelenskiy.

In a move likely to grate with Moscow, Zelenskiy used the meeting to trumpet a deal enabling Ukrainian factories to produce Turkish drones that have already been deployed in Ukraine’s war against Russia-backed rebels in its eastern Donbass region.

In Paris, French President Emmanuel Macron said he and Polish President Andrzej Duda had discussed the possibility of a three-way meeting along with Germany’s Olaf Scholz in coming days on the situation in Ukraine.

European Commission President Ursula von der Leyen said the European Union was working on a joint response to a letter many of its member countries received from Russia asking for security guarantees.

Von der Leyen called for Russia to return to a path of “peace and dialogue” or face sanctions.