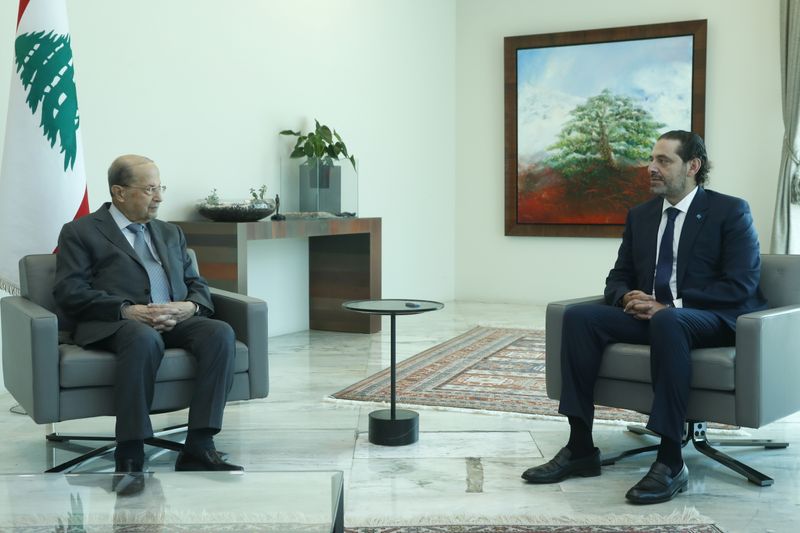 BEIRUT (Reuters) -Lebanon’s prime minister-designate Saad al-Hariri has presented a new cabinet proposal to President Michel Aoun and said he was awaiting his response on Thursday in a move that could end nine months of deadlock as the country faces economic collapse.

Veteran Sunni politician Hariri has presented multiple proposals to Aoun, an ally of Iran-backed Shi’ite group Hezbollah, over the past months, but they have been unable to agree on a list.

“Now is the moment of truth,” Hariri, who has been at loggerheads with Aoun over the naming of ministers since he was appointed in October, told reporters on Wednesday after the meeting.

Aoun said in a statement he would study the proposal that contained “new names and a new distribution for portfolios and sects from what was previously agreed” to reach a decision.

The proposal is for 24 specialist technocrat ministers, in line with a French initiative that envisioned a government capable of enacting reforms that could unlock much needed foreign aid to rescue the nation.

The previous proposals have also been for a technocrat team belonging to different sects. It was not immediately clear specifically how the new line-up differed or what would happen if Aoun rejected it.

However, Wednesday’s proposal is seen as Hariri’s last attempt to form a cabinet as he was widely expected to give up on his efforts after a trip to long-time backer Egypt.

Saudi-owned Al Hadath television reported earlier that Cairo had asked him not to stand down, citing its own sources.

Sources in Cairo said Egypt had promised economic and political support for a new government and that a delegation would travel to Beirut soon.

If the cabinet were rejected and Hariri quit, it would leave the country having to seek another Sunni willing to replace him.

Under a sectarian power-sharing system, Lebanon’s president must be a Maronite Christian and the prime minister a Sunni Muslim. With less than a year to an anticipated parliamentary election, few figures might be willing to step forward.

Lebanon has been without a government since the last one resigned in the aftermath of the Aug. 4 Beirut port blast that killed more than 200 people, injured thousands of others and destroyed swathes of the city.

The deadlock has deepened the financial crisis, dubbed by the World bank as one of the deepest depressions of modern history.

“For me this government can start to rescue the country and stop the collapse,” Hariri said.