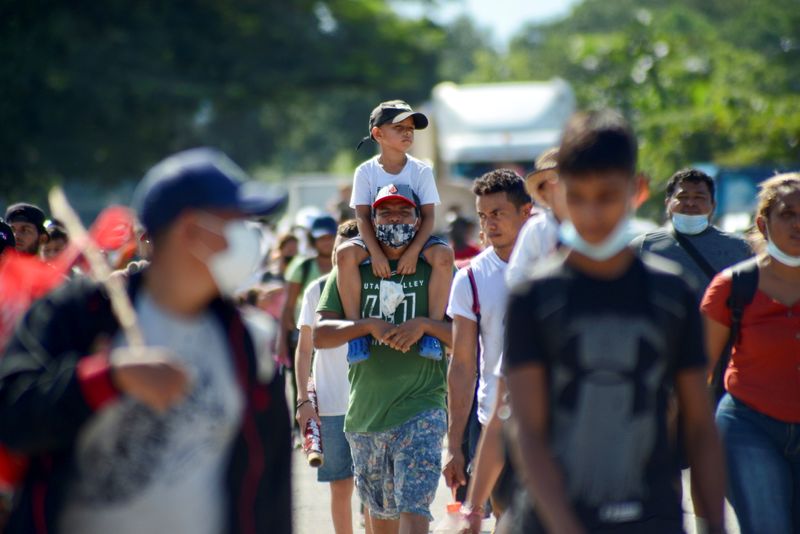 FILE PHOTO: A migrant carries his son on his shoulders while walking, along with other migrants and asylum seekers from Central America and the Caribbean, in a caravan heading to the U.S., in Tapachula, Chiapas state, Mexico September 4, 2021. REUTERS/Jacob Garcia/File Photo

TAPACHULA, Mexico (Reuters) – U.S.-bound migrants, mostly from Central America and the Caribbean, said on Thursday that a Mexican government crackdown was keeping them “prisoner” in the south of the country.

The migrant comments contrasted with Mexican President Andres Manuel Lopez Obrador’s promises of humane treatment ahead of Thursday’s high-level meeting between Mexican and U.S. officials in Washington, where the two countries agreed that development of poor regions was a long-term solution to slow migration north.

“Mexican authorities are mistreating us migrants,” said Guillermo Rivas, 25, from El Salvador, who said he was beaten by agents while in a detention center in the southern city of Tapachula.

Mexico’s immigration agency, which runs the detention center, did not immediately respond to a request for comment.

Rivas said he has been waiting in the city for nearly five months for asylum paperwork that would allow him to move freely in Mexico.

“Tapachula is like a prison,” he told Reuters by telephone on Thursday. “We’re asking that Mexico open its doors to allow migrants to cross the country without danger, abuse, or mistreatment.”

Migration was one of the top issues in the high-level talks in Washington, where officials agreed to pursue development programs https://www.reuters.com/world/americas/us-mexico-resume-economic-talks-halted-by-trump-with-focus-labor-border-2021-09-09 in southern Mexico and Central America aimed at tackling the economic causes that drive immigration to the United States.

Ahead of the talks, Lopez Obrador said Mexican officials and security forces have “complete and absolute respect for human rights” of migrants and heralded the Washington discussions as the beginning of a “new stage” in migration politics.

“Today’s meeting is very important,” he said, “because there has been no attention to the population that sees it as necessary to migrate. There’s been nothing for years; everything is to contain, everything is coercive, and that’s not how to resolve social problems.”

But in the lead-up to the bilateral discussions, Mexico faced mounting pressure https://www.reuters.com/world/us/exclusive-us-urges-mexico-clear-migrant-camps-near-border-sources-2021-08-26 from Washington to take immediate steps to curtail U.S.-bound immigration, even as frustration among migrants in Tapachula boiled over and hundreds of people departed the city in a series of caravans.

In response, Mexico deployed security forces, including the heavily militarized National Guard, to block, sometimes violently https://www.reuters.com/world/americas/mexico-condemns-violent-actions-by-migration-agents-caught-video-2021-08-30, the groups, which included many families and young children.

“I had to risk my life to avoid getting arrested,” said Max, a Haitian caravan member who declined to give his last name, as he trudged along a highway in the southeastern state of Veracruz on Wednesday.

Describing how he threw himself under a bridge in order to avoid being captured, he denounced the treatment he and other migrants have received from Mexican security forces in recent days.

“The migration process shouldn’t be like this,” he said.

The National Guard referred Reuters to Mexico’s immigration agency, which said in statements that it has suspended two agents and that the agency “condemns any aggression against migrants.”