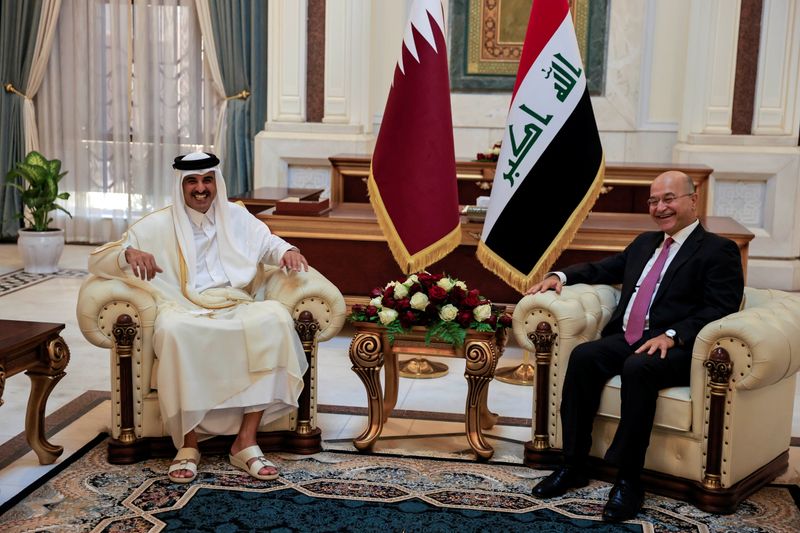 BAGHDAD (Reuters) – Several Middle Eastern leaders and French President Emmanuel Macron met in Baghdad on Saturday at a summit hosted by Iraq, which wants its neighbours to talk to each other instead of settling scores on its territory.

Relationships within the region are strained chiefly by hostility between Iran on one side and the United States and its Arab Gulf allies on the other.

Organisers said they did not expect any diplomatic breakthroughs at the summit. “Getting these countries to sit around the table – that will be achievement enough,” said one Iraqi government official.

Shi’ite Muslim Iran and Sunni Saudi Arabia, longtime rivals for regional dominance, did not send their heads of state or government. Iran said it was sending Foreign Minister Hossein Amirabdollahian, while Saudi Arabia had not yet announced its representative.

The two countries resumed direct talks in Iraq in April this year, but there has been no significant outcome so far.

Iranian officials have said they are focused more on the outcome of talks in Vienna with Western powers over Iran’s nuclear programme and international sanctions.

“The meeting in Iraq … is only focused on Iraq and how the regional countries can cooperate to help Iraq,” an Iranian official told Reuters ahead of the Baghdad summit.

The U.S.-Iran rivalry brought the Middle East to the brink of war after the United States under former U.S. President Donald Trump killed Iran’s military mastermind Qassem Soleimani in a drone strike at Baghdad airport in 2020.

Saudi Arabia has blamed attacks on its oil installations on Iran – a charge Tehran denies.

(Reporting by Baghdad newsroom and John Davison in Geneva, Editing by Catherine Evans)