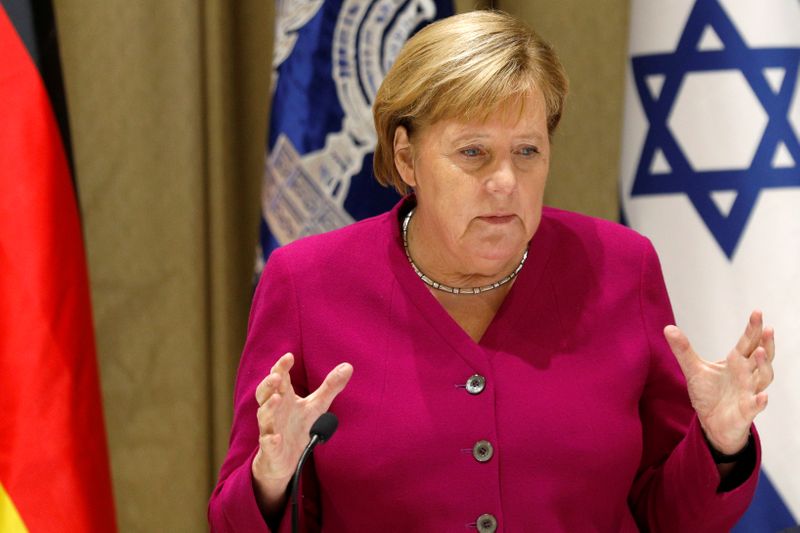 JERUSALEM (Reuters) -Outgoing German Chancellor Angela Merkel pledged on Sunday that her country would preserve its post-Holocaust commitment to Israel, which hailed her as a “moral compass” for Europeans at times divided over its Middle East conflicts.

Merkel, making her eighth and final visit to Israel as she concludes her 16-year term, met Israeli Prime Minister Naftali Bennett and was scheduled to tour the Yad Vashem memorial to the six million Jews killed by the Nazis during World World Two.

Germany has been a leading postwar European ally of Israel and Merkel has sought to cultivate security and economic ties, though she has differed with Israel on policies concerning the Palestinians and Iran.

“I want to use this opportunity to emphasise that the topic of Israel’s security will always be of central importance and a central topic of every German government,” she told Bennett at a private meeting, according to a transcript issued by his office.

Attending a later session of Bennett’s cabinet, Merkel added: “It is a gift of history, to which Israel contributed much, that Germany can sit here at a table with you today since the history of the Shoah (Holocaust) is a singular event for which we continue to bear responsibility in every phase of history, including in the future.”

Bennett praised his guest for fulfilling a special role in a relationship that rests on an enormous historical wound.

“Those who preserve neutrality in the conflict between Israel and countries like Iran and groups like Hamas and Hezbollah have lost their moral compass. And you, chancellor, have for years served as moral compass for the entire European continent in promoting an uncompromising tack of backing Israel.”

Bennett, a nationalist atop a cross-partisan coalition, opposes Palestinian statehood, putting him at odds with Western powers such as Germany.

“We sometimes disagree on questions such as whether there should be a two-state solution with the Palestinians, but we agree, I think, that there must always be a vision of a lasting democratic Jewish State of Israel,” Merkel told Bennett’s cabinet.

The visit had been planned for late August but Merkel postponed the trip, citing the tense situation in Afghanistan.

Following an inconclusive Sep. 26 election, Germany’s Social Democrats are courting https://www.reuters.com/world/europe/german-greens-say-want-pursue-coalition-talks-with-spd-fdp-2021-10-06 smaller parties to form a coalition that would replace a conservative grouping led by Merkel’s Christian Democrats. Merkel, 67, plans to step down once a new government is formed.