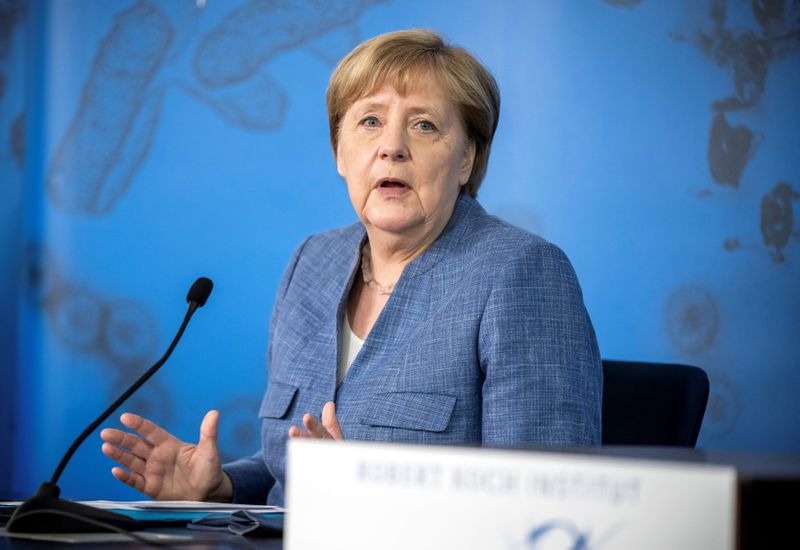 By Andreas Rinke and Joseph Nasr

BERLIN (Reuters) – Chancellor Angela Merkel and President Joe Biden hold talks at the White House on Thursday that experts say are unlikely to yield major breakthroughs on divisive issues like a Russian gas pipeline to Germany and a U.S. push to counterbalance China.

Both sides have said they want to reset ties strained during the presidency of Donald Trump. Yet their positions on the most divisive issues remain far apart.

Merkel has rejected opposition from the United States and eastern European neighbours to the almost completed Nord Stream 2 pipeline which they fear Russia could use to cut out Ukraine as a gas transit route, depriving Kyiv of lucrative income and undermining its struggle with Moscow-backed eastern separatists.

And during her 16 years in power, she has worked hard for closer German and European economic ties with China, which the Biden administration sees as a global threat that it wants to counter with a joint front of democratic countries.

“The problem for the U.S. is that Merkel has the upper hand, because she has decided that the status quo in the trans-Atlantic relationship is good enough for Germany,” said Ulrich Speck, an independent foreign policy analyst. “Biden by contrast needs to win over Germany for his new China strategy.”

Officials from both sides are engaged in intense discussions to resolve the issue and stave off the reimposition of sanctions that Biden waived in May. Biden has opposed the project, but he is also facing increasing pressure from U.S. lawmakers to reimpose sanctions.

“Nord Stream 2 is the area where you most realistically can expect progress,” said Thorsten Benner of the Global Public Policy Institute (GPPi). “Merkel may hope to get away with providing guarantees for Ukraine’s continued role as a gas transit country and a vague snapback mechanism that would kick in if Russia seeks to cut transit through Ukraine.”

A senior U.S. administration official, speaking on condition of anonymity, said Biden would underscore his opposition when he meets with Merkel, but the waiver had given diplomatic space for both sides to “address the negative impacts of the pipeline”.

“Our teams are continuing to discuss how we can credibly and concretely ensure that Russia cannot use energy as a coercive tool to disrupt Ukraine, eastern flank allies or other states,” the official said.

Merkel, who will step down after an election in September, vowed during a news conference on Monday with visiting Ukrainian President Volodymyr Zelenskiy that Germany and the European Union will guarantee Ukraine’s status as a transit country.

“We promised Ukraine and will keep our promise,” said Merkel. “It is my custom to keep my word and I believe this applies to every future chancellor.”

The issue of China is more complicated.

Merkel was an advocate of an investment pact between the European Union and China struck late last year on the eve of Biden taking office, and she has been criticised for not facing up to Beijing on human rights violations in Hong Kong and against a Muslim minority in Xinjiang, which the United States has labelled a genocide.

“There will likely be a joint call by Biden and Merkel for China to step up its efforts on carbon reduction and global health, maybe a reference to the need to further open the Chinese market,” Benner said. “But don’t expect anything from Merkel that will remotely look like there is a joint trans-Atlantic front on China.”

The two countries also remain at odds over a proposed temporary waiver of intellectual property rights to help increase production of COVID-19 vaccines, a measure backed by Washington, and the United States’ refusal to ease travel restrictions on visitors from Europe.