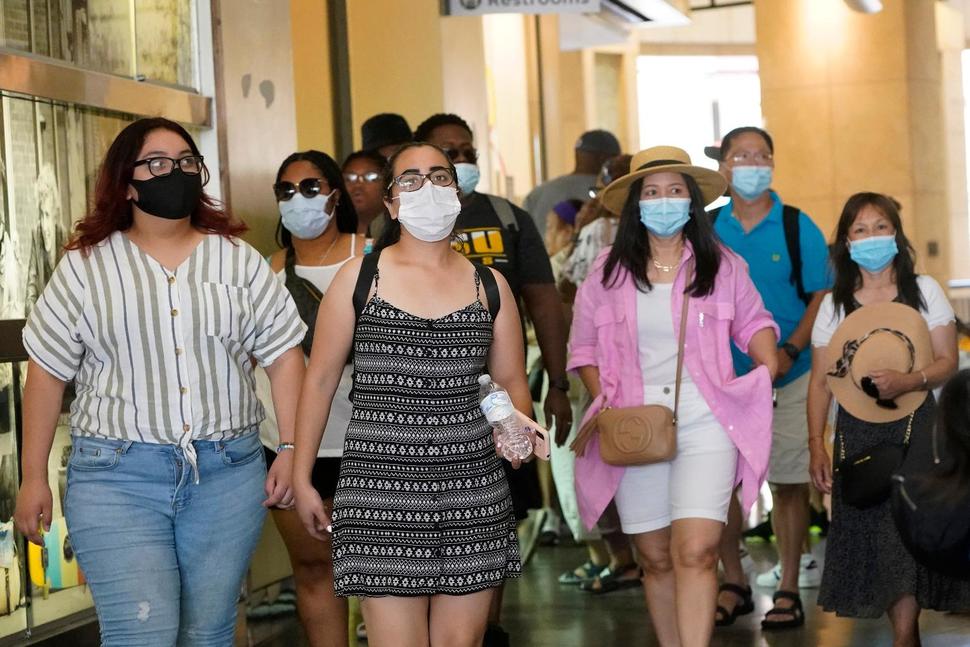 Los Angeles County will again require masks indoors even when people are vaccinated.

Los Angeles County residents will again be required to wear masks indoors, regardless of their vaccination status, while the University of California system said that students, faculty and staff must be inoculated against the coronavirus to return to campuses.

The announcements Thursday came amid a spike in COVID-19 cases, most of them the highly transmissible delta variant that has proliferated since California fully reopened its economy on June 15 and did away with capacity limits and social distancing. The vast majority of new cases are among unvaccinated people.

“This is an all-hands-on-deck moment,” Davis said during a virtual news conference.

He didn’t fully detail what would be some exceptions to the mask rule but said, for example, people could still take off their masks while eating and drinking at restaurants.

Davis said officials will focus on education rather than enforcement. Handing out citations to people who don’t comply is “not something we really want to have to do,” he said.

Los Angeles County has been recording more than 1,000 new cases each day for a week, and there is now “substantial community transmission,” Davis said. On Thursday, there were 1,537 new cases, and hospitalizations have now topped 400.

“The next level is high transmission, and that’s not a place where we want to be,” he said.

It comes after a winter where Los Angeles County experienced a massive surge in infections and deaths, with hospitals overloaded with COVID-19 patients and ambulances idling outside, waiting for beds to open.

Now, hospitalizations in California are above 1,700, the highest level since April. More than 3,600 cases were reported Thursday, the most since late February, but a far cry from the winter peak that saw an average of more than 40,000 per day.

Other counties, including Sacramento and Yolo, are strongly urging people to wear masks indoors but not requiring it.

“The drastic increase in cases is concerning — as is the number of people choosing not to get vaccinated,” Sacramento County Public Health Officer Olivia Kasirye said.

The Los Angeles County decision came within hours of the University of California’s announcement that students, faculty and staff must be vaccinated for the upcoming semester.

UC President Michael V. Drake said in a letter to the system’s 10 chancellors that unvaccinated students without approved exemptions will be barred from in-person classes, events and campus facilities, including housing.

“Vaccination is by far the most effective way to prevent severe disease and death after exposure to the virus and to reduce spread of the disease to those who are not able, or not yet eligible, to receive the vaccine,” Drake wrote.

He said the decision came after consulting UC infectious disease experts and reviewing evidence from studies on the dangers of COVID-19 and emerging variants like the delta strain.

In San Francisco, cases are rising among the unvaccinated. Black and Latino people are getting shots at a lower rate than others, and Mayor London Breed urged them to get the vaccine.

She said Thursday that every person hospitalized with COVID-19 at San Francisco General Hospital is unvaccinated and most are African American.

San Francisco Supervisor Shamann Walton said the highest number of cases are in the Bayview district, a largely Black neighborhood, “because we are not doing everything we can to protect each other. This is a cry to my community. … We need you to get vaccinated.”

San Francisco has one of the highest overall vaccination rates in the nation’s most populated state. At least 83% of residents 12 and older have received at least one dose.

Meanwhile, north of San Francisco, at least 59 residents at a homeless shelter have tested positive for the virus. Of those infected at the Santa Rosa shelter, 28 were fully vaccinated, Dr. Sundari Mase, Sonoma County’s health officer, said Wednesday. Officials were reviewing an additional 26 possible positive cases.

Of those with confirmed infections at Samuel L. Jones Hall, nine were hospitalized, including six who were fully vaccinated and had “multiple, significant” underlying health conditions, including diabetes and pulmonary disease, health officials said.

Fewer than half of the shelter’s 153 residents had received at least a partial vaccination, officials said, and they don’t know if the outbreak started with a vaccinated or unvaccinated resident.

“We know congregate settings are at much higher risk,” Mase said. “We also know there is a very high proportion of unvaccinated individuals that were in this setting.”

Most of the 69 vaccinated residents had received the single-shot Johnson & Johnson dose, but Mase said it was hard to determine whether that was a factor in the outbreak.

Vaccines decrease the severity of the illness, reduce hospitalizations and decrease the risk of death. Clinical trials showed that a single dose of the J&J vaccine was 72% effective against moderate to severe COVID-19 in the United States, compared with 95% for the Pfizer and Moderna vaccines.

A Food and Drug Administration analysis cautioned that it’s not clear how well the vaccines work against each variant.

So-called breakthrough cases among the fully vaccinated are unusual. Between Jan. 1 and June 30, California identified 8,699 such cases out of the more than 20 million who have received the vaccine.