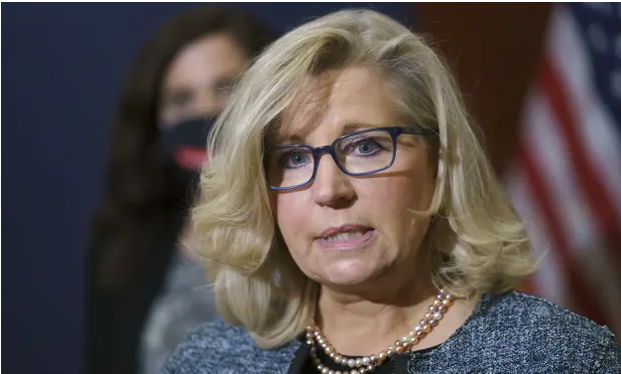 Congresswoman Liz Cheney of Wyoming is facing removal from her leadership position in the Republican caucus of the House of Representatives on Wednesday morning in an internal battle seen as a bellwether of the future direction of the party.

Cheney’s ouster is widely expected after she found herself at odds with other members of Republican leadership over her refusal to stop blaming Donald Trump for inciting the mob attack on the United States Capitol on 6 January.

She addressed the vote on Tuesday evening in a fiery speech to the House of Representatives. “Today we face a threat America has never seen before,” she said. “A former president who provoked a violent attack on this Capitol, in an effort to steal the election, has resumed his aggressive effort to convince Americans that the election was stolen from him.”

Cheney also doubled down on condemning Trump and his allies for risking the peaceful transition of power with their baseless accusations that the election was rife with fraud.

The daughter of the former vice-president Dick Cheney, Cheney has become a symbol of a dwindling band of Republicans largely opposed to Trump’s vice-like grip on the party. Even though she is a staunch conservative, she has faced implacable hostility from Trump and his loyalists.

The vote is among members of the Republican caucus in the chamber and is set to be conducted by secret ballot.

Cheney had faced the threat of removal from her leading role before, but she survived that handily, in part, thanks to support from other members of Republican leadership. This time is different though. Cheney has lost support from Congressman Kevin McCarthy of California, the House minority leader, and Congressman Steve Scalise of Louisiana, the House minority whip.

“Yes I do,” the top congressional Republican said in an interview on Fox News when asked if the New York congresswoman had his support now instead of Cheney.

McCarthy has been eager to oust Cheney from leadership. He was recently caught on a hot mic saying: “I’ve had it with her.”

McCarthy set the vote for a new conference chair for Wednesday. In a letter announcing the new election, the California representative echoed arguments many Republicans made against Cheney – that her ongoing criticism of Trump was distracting from Republicans’ primary efforts to retake control of the House.

“This is no time to take our eye off the ball,” McCarthy wrote in the letter. “If we are to succeed in stopping the radical Democrat agenda from destroying our country, these internal conflicts need to be resolved so as to not detract from the efforts of our collective team. Having heard from so many of you in recent days, it’s clear that we need to make a change.”

The main driver behind the attack on Cheney, though, has been Trump, who has fumed about Cheney’s criticism and her decision to vote to impeach the president, alongside almost a dozen other House Republicans. Cheney has been the highest-ranking outspoken anti-Trump Republican in Congress. That stance looks to be felt back home where multiple candidates have jumped into the Republican primary to oust Cheney from her congressional seat.

Trump and his allies are assessing who to support in that primary. The former president’s political operation is watching the primary field closely, looking to see who might emerge as the strongest challenger to Cheney.

Cheney’s troubles are the latest sign that Trump’s influence is still hugely powerful within the Republican party, more so than any of the other recent Republicans who were elected president or were nominated to be president.

Cheney herself is no newcomer to primary challengers. She once ran for Senate in Wyoming, challenging then-senator Mike Enzi. She ended up dropping out after failing to get serious traction. She was later elected to Congress as the sole representative from the state.

Ahead of the vote, Cheney has some support from some like-minded Republican allies.

Late on Monday night Congresswoman Jaime Herrera Beutler of Washington’s office said she planned to vote for Cheney to keep her leadership position.

“Jaime will be voting to keep the House leadership in place,” Craig Wheeler, a Beutler spokesperson, said in an email to the Guardian.