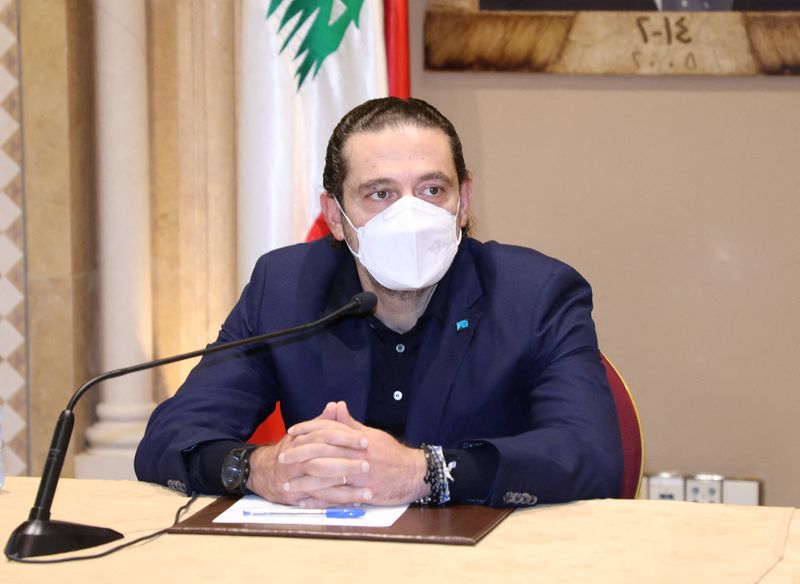 By Tom Perry and Laila Bassam

BEIRUT (Reuters) – Lebanese Sunni Muslim leader Saad al-Hariri https://www.reuters.com/world/middle-east/lebanons-hariris-turbulent-career-politics-2022-01-24 said on Monday he was stepping back from political life and would not run in the parliamentary election, turning Lebanon’s sectarian politics on its head as the country grapples with a financial crisis.

Hariri, three times prime minister, also called on his party not to run any candidates in May’s vote, indicating several factors were behind his decision, including Iranian influence — a reference to the heavily armed Shi’ite group Hezbollah.

Hariri’s Future Movement has long been the biggest representative of the Sunni community, controlling one of the largest blocs in parliament that also included members of other sects – seats which others can now win.

The move injects huge uncertainty into Lebanese politics just months ahead of the election, in which Hezbollah’s adversaries had hoped to overturn a majority it won with its allies in 2018.

Some analysts have said a boycott by Lebanon’s largest Sunni movement, which would leave the Sunni political scene in disarray, may lead to calls for a delay.

In a televised address, Hariri said he had decided to “suspend any role in power, politics and parliament”, his voice breaking with emotion as he spoke in front of a portrait of his father, Rafik al-Hariri, who was assassinated in 2005.

“I am convinced that there is no room for any positive opportunity for Lebanon in light of Iranian influence, international disarray, national division, sectarianism, and the collapse of the state,” he said.

While Hariri has remained Lebanon’s leading Sunni since inheriting his father’s political mantle, his political fortunes have waned in recent years, with his position weakened by the loss of Saudi support. Future lost a third of its seats in 2018, some of them to Hezbollah-allied Sunnis.

Walid Jumblatt, Lebanon’s leading Druze politician, told Reuters the announcement was “very sad because we are losing a major pillar of independence and of moderation”. “It means a free hand for Hezbollah and the Iranians,” he added.

Hariri’s announcement comes as Lebanon suffers an economic meltdown https://www.reuters.com/markets/rates-bonds/penny-pinching-power-cuts-lebanons-middle-class-squeezed-by-crisis-2022-01-23 which the World Bank has described as one of the sharpest ever globally. The sectarian elite has failed to take steps to address the crisis https://www.reuters.com/markets/rates-bonds/how-bad-is-lebanons-economic-meltdown-2022-01-23, even as the bulk of the population has fallen into poverty.

THE PRICE OF COMPROMISE

Mohanad Hage Ali, a fellow at the Carnegie Middle East Center, said a boycott by Hariri “pulls rug from under the whole process, and would increase speculation that (the election) might not happen”.

Hariri’s early years in politics were defined by his close alliance with Saudi Arabia and confrontation with Lebanese allies of Syria and Iran, chief among them Hezbollah. He led a Western-backed alliance called “March 14”.

Tensions spilled into a brief armed conflict in 2008, during which Hezbollah took over Beirut.

In his speech, Hariri said his goal of avoiding civil war in Lebanon had forced compromises on him, a reference to understandings with Hezbollah and a deal that made one its allies, Christian politician Michel Aoun, president in 2016.

Hariri became prime minister under that agreement for a second time.

Hezbollah’s adversaries have for years accused him of abandoning the principles of March 14.

Avoiding civil war “was the reason for every step I took, it was also the reason I lost my personal wealth, some of my foreign friendships, many of my national alliances, some comrades and even brothers”, Hariri said, a reference to his brother Bahaa, a fierce critic of his policy towards Hezbollah.

His ties with Saudi Arabia, Iran’s main regional rival, hit a low in 2017 when he was held while visiting the kingdom and forced to declare his resignation as prime minister – an incident https://www.reuters.com/article/us-lebanon-politics-hariri-exclusive-idUSKBN1DB0QL widely reported though denied by Riyadh and Hariri.

He was released after French mediation.