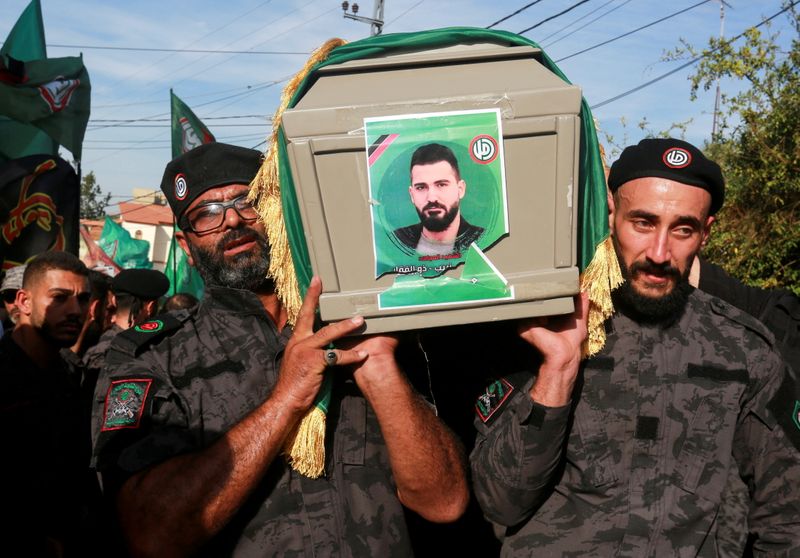 FILE PHOTO: Supporters of the Shi’ite Amal Movement carry the coffin of a man who was killed in yesterday’s violence in Beirut, during his funeral in Nmairiyeh village, southern Lebanon October 15, 2021. REUTERS/Aziz Taher

The seven were killed on Thursday as crowds headed for a demonstration called by Amal and its Iranian-backed ally Hezbollah group in bloodshed that stirred memories of the 1975-1990 civil war.

“What happened showed the Lebanese people the truth behind what these groups are doing in terms of trying to ignite internal strife and national division and threaten civic peace and pushing the Lebanese back to the era of civil wars,” Amal said in a statement.

The incident marked the worst street violence in over a decade and added to fears for the stability of a country that is awash with weapons and suffering an economic meltdown.

Amal, which is led by Lebanese parliament speaker Nabih Berri, one of the most powerful political figures in the country, urged the authorities to arrest all those responsible.

Hezbollah blamed the Christian Lebanese Forces (LF) party for the deaths, an accusation that LF head Samir Geagea denied. The LF condemned Thursday’s events and blamed the violence on Hezbollah’s “incitement” against Tarek Bitar, the lead investigator in a probe into last year’s blast at Beirut port.

Amal and Hezbollah had called the demonstration to protest against Bitar.

The inquiry into the Aug. 4, 2020 explosion, which killed more than 200 people and devastated swathes of Beirut, has made little headway amid pushback from political factions.

Hezbollah chief Hassan Nasrallah, who is expected to deliver his first speech since the violence on Monday night, has said Bitar is not objective.

“Difference of opinion is granted but fighting in the streets is not acceptable,” he said in comments carried by the state National News Agency. “The solution is through peaceful means not through the use of weapons that are spread in the street.”