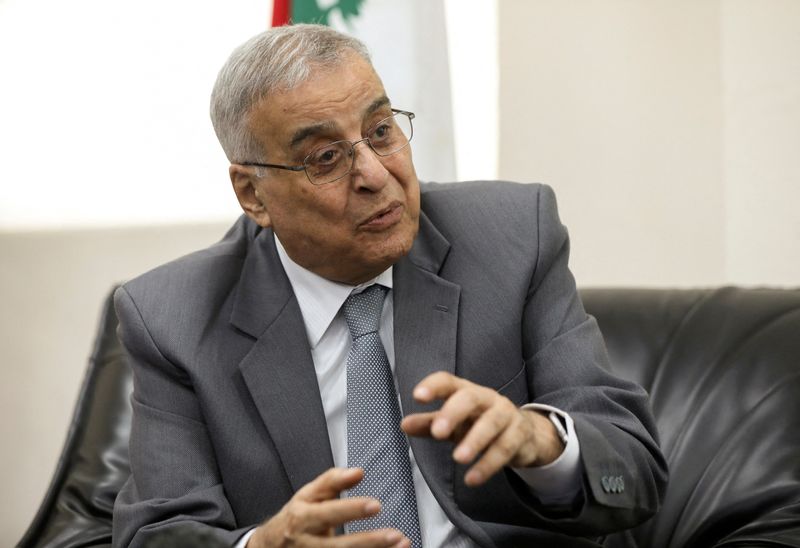 FILE PHOTO: Lebanese Foreign Minister Abdallah Bou Habib gestures as he speaks during an interview with Reuters at his office at the Ministry of Foreign Affairs in Beirut, Lebanon November 2, 2021. REUTERS/Mohamed Azakir/File Photo

BEIRUT (Reuters) – Lebanon’s foreign minister said he was not going “to hand over” Hezbollah’s weapons during a meeting this weekend with Gulf Arab counterparts that want Beirut to rein in the Iran-backed Lebanese Shi’ite group in exchange for improved ties.

In a nod to Gulf concerns, Lebanon will however say that the country will not be “a launchpad for activities that violate Arab countries,” according to sources familiar with a draft government letter responding to Gulf terms for improved ties.

Lebanon is due at the meeting in Kuwait on Saturday to deliver its response to the terms for thawing relations, which have suffered as the heavily armed Hezbollah has grown more powerful in Beirut and the region.

“I am not going (to Kuwait) to hand over Hezbollah’s weapons. I am not going to end Hezbollah’s existence, it is out of the question in Lebanon. We are going for dialogue,” Lebanese Foreign Minister Abdallah Bou Habib told Al Jazeera.

Hezbollah supports Iran in its regional struggle for influence with U.S.-allied Gulf Arab states, which say the group has aided the Iran-aligned Houthis who are fighting a Saudi-led coalition in Yemen.

Founded by Iran’s Revolutionary Guards in 1982, Hezbollah has a militia more powerful than Lebanon’s army and has backed pro-Iran allies in the region, including Syria.

The group and its allies also exercise major sway over Lebanese state policy.

The terms delivered to Beirut on Jan. 22 by the Kuwaiti foreign minister include setting a time frame for implementing U.N. Security Council resolutions, among them Resolution 1559 which was adopted in 2004 and calls for the disarmament of non-state militias in Lebanon.

A draft of the government’s response seen by Reuters sidesteps the issue, expressing Lebanon’s respect for U.N. resolutions “to ensure civil peace and national stability.”

But it mentions no specific U.N. resolution or any steps to implement them.

The Gulf rift has added to the difficulties facing Lebanon as it struggles with a financial crisis that the World Bank has described as one of the sharpest depressions ever recorded.

Saudi Arabia and its fellow Gulf Arab monarchies once spent billions of dollars in aid in Lebanon before ties soured.

The visit to Beirut last week by Kuwaiti Foreign Minister Sheikh Ahmad Nasser al-Mohammad al-Sabah was the first since the rift. He said Lebanon must not be a platform for hostile acts or words toward Gulf Arab states, and that members of the Gulf Cooperation Council (GCC) were sympathetic to the Lebanese people.

In the draft letter, Lebanon commits “verbally and actually” to a policy of disassociation from regional conflicts – a policy adopted by successive governments even as Hezbollah has deployed fighters to Syria.

It also pledges to strengthen measures being taken by Lebanon in cooperation with other Arab states to prevent drug smuggling to Gulf Arab states.

Hezbollah’s adversaries accuse it of links to regional drugs trade – something it denies. The GCC in December called on Lebanon to tighten border controls and take measures to deter drug smuggling via exports into Saudi Arabia and other Gulf states.