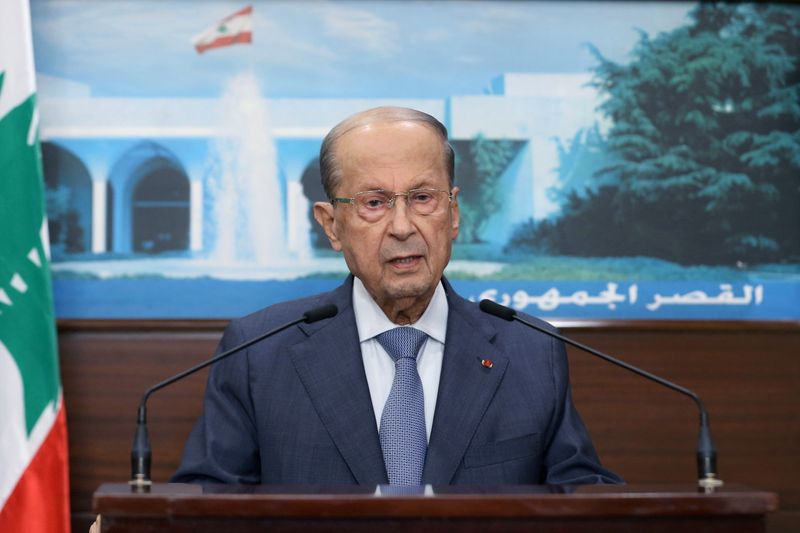 BEIRUT (Reuters) – Worsening sectarian tensions in Lebanon are testing an alliance between Shi’ite Hezbollah and its Christian ally President Michel Aoun, who may lose ground to their rivals as they step up opposition to the Iran-backed group’s influence.

Analysts believe divisions that have deepened since an outbreak of violence in Beirut last week may play to the political advantage of Aoun’s long-time Christian adversary, Samir Geagea, a Hezbollah opponent with close Saudi ties.

The alliance between the heavily armed Hezbollah and Aoun has been a defining feature of Lebanese politics since 2006: Hezbollah helped Aoun become president in 2016, while Aoun has provided important Christian backing for the armed status of the group, which is more powerful than the Lebanese army.

But strains have been growing, specifically over Hezbollah’s opposition to the investigation into who was to blame for last year’s catastrophic explosion at the Beirut port, which, while killing many Muslims, did most of its damage in Christian parts of the city.

All of the seven dead were Shi’ites, killed in what Hezbollah has called an ambush by the Lebanese Forces, a Christian party led by Geagea.

The LF denies this and blames the other side for provoking trouble by sending supporters into the Christian neighbourhood of Ain al-Remmaneh where it says four residents were wounded before a shot was fired.

The violence began as supporters of Hezbollah and its Shi’ite ally, Amal, began gathering for a protest to demand the removal of Judge Tarek Bitar, who is investigating the blast that killed more than 200 people.

“Today, you have Christians rejecting these scenes of getting back to civil war memories, and at the same time not happy with the way Shia are expressing their opposition to the Judge Bitar process,” said a source familiar with thinking in the Free Patriotic Movement, the party founded by Aoun.

The FPM and Hezbollah had not decided to part ways, but the course of events was separating them, the source said.

Officials from Hezbollah and the FPM did not immediately respond to a Reuters request for comment.

Hezbollah has accused Bitar of bias as he has sought to question some of its allies on suspicion of negligence that led one of the largest non-nuclear explosions ever.

Geagea, who stands by Bitar, has said Thursday’s trouble began when Hezbollah and Amal supporters vandalised cars, clashed with residents and tried to enter homes in Ain al-Remmaneh.

“It wasn’t the Lebanese Forces that defended the area … all the people of Ain al-Remmaneh did that,” Geagea said in an interview late on Friday.

The view that Ain al-Remmaneh was attacked was widely shared among Christians, said Mohanad Hage Ali of the Carnegie Middle East Center.

“There is some kind of agreement among Christians on supporting the port blast investigation and the right to self defence – and that Hezbollah and Amal attacked the area before they were attacked themselves,” he said.

“Geagea so far seems to have gained some popularity among Christians.”

Nabil Boumonsef, deputy editor-in-chief of Annahar newspaper, said the FPM had made a mistake by accusing Geagea of the violence and he enjoyed wide sympathy among Christians.

“I see the FPM as the biggest loser,” he told Reuters.

The army is investigating Thursday’s violence.

It initially said gunfire had targeted protesters but later stated there had been an altercation and exchange of fire while protesters were on their way to the demonstration.

A soldier suspected of firing towards protesters is under investigation.

The FPM is the biggest Christian party. In Lebanon’s last parliamentary election in 2018, the FPM, Hezbollah and other parties that support the group’s possession of weapons secured a majority.

Hezbollah’s opponents hope this can be overturned in 2022, with Christian seats seen as the main battleground.

In addition to the port blast, Aoun’s presidency has been overshadowed by a massive financial meltdown that has plunged more than three quarters of the population into poverty.

Gebran Bassil, FPM head and Aoun’s son-in-law, revisited the arguments for the alliance with Hezbollah in a speech on Saturday, including its fight against jihadists at the Syrian border.

He appeared to side with Hezbollah in implying that the Lebanese Forces were to blame for the violence, and echoed some of Hezbollah’s criticism of the probe when he said it had been conducted in a “selective” way.

But Bassil said it was still not clear that Bitar himself was politicised and the probe should continue. “We will confront those who try to obstruct the file,” he said.