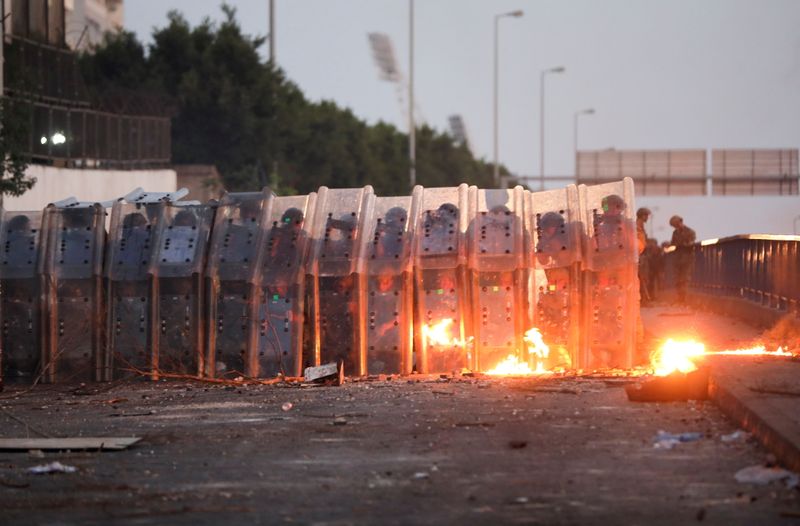 Lebanese army take cover behind shields as they deploy during a protest after Lebanese Prime Minister-Designate Saad al-Hariri abandoned his effort to form a new government, in Beirut, Lebanon July 15, 2021. REUTERS/Mohamed Azakir TPX IMAGES OF THE DAY

BEIRUT (Reuters) -Lebanese politician Saad al-Hariri abandoned his months-long effort to form a new government on Thursday, dimming the chances of a cabinet being agreed any time soon that could start rescuing the country from financial meltdown.

Hariri announced his decision after meeting President Michel Aoun, saying it was clear they could not agree, underscoring the political squabbling that has blocked the formation of a cabinet even as Lebanon sinks deeper into crisis.

Hariri, a former prime minister and Lebanon’s leading Sunni Muslim politician, was designated in October to assemble a government following the resignation of Prime Minister Hassan Diab’s cabinet in the wake of the Beirut port explosion.

Protesters blocked some roads near predominantly Sunni areas of Beirut after his announcement on Thursday, setting fire to trash and tyres. Army troops deployed, firing in the air to disperse protesters who pelted the soldiers with missiles. One soldier was wounded, a security source said.

French Foreign Minister Jean-Yves Le Drian said Lebanese leaders seemed unable to find a solution to the crisis that they had created, calling the failure to form a cabinet another terrible incident.

The secretary general of the Arab League, Ahmed Aboul Gheit, said the ramifications of the step would be serious.

U.S. Secretary of State Antony Blinken said Hariri’s decision was “disappointing” and urged Lebanese leaders to put aside their differences and form a government.

The World Bank has described Lebanon’s depression as one of the sharpest in modern history. The currency has lost more than 90% of its value in two years; poverty has spread and there have been crippling fuel shortages, prompting growing fears of social unrest.

Hariri’s decision marks the culmination of months of conflict over cabinet posts between him and Aoun, the Maronite Christian head of state who is allied with the Iran-backed Shi’ite Muslim group Hezbollah.

Hariri and Aoun blamed each other.

“You can’t ask me to do everything I can and there is another who doesn’t want to sacrifice anything,” Hariri said to local television Al Jadeed in an interview hours after his decision, saying that Aoun had insisted on a blocking minority in any cabinet and that was a main stumbling bloc.

Hariri said Aoun had requested fundamental changes to a cabinet line-up he had presented to him on Wednesday.

“It is clear we will not be able to agree with his Excellency the President,” Hariri said after meeting Aoun for barely 20 minutes. “That is why I excuse myself from government formation and God help the country.”

In a statement, the presidency said Hariri had refused to discuss any changes and proposed to Aoun that he take an extra day to accept the proposed line-up. “What is the use of one extra day if the door of discussion is closed?” Aoun told him.

The presidency said Aoun would call for consultations with MPs to designate a new prime minister as soon as possible.

Hariri told Al Jadeed television later that his Future Movement would not name any candidates in the consultations.

But there is no obvious alternative for the post, which must be filled by a Sunni in Lebanon’s sectarian system.

Analysts doubt that any Sunni politician of standing would accept the role without Hariri’s blessing.

Diab remains the caretaker prime minister until a new government is formed.

The economic freefall is Lebanon’s worst crisis since the 1975-90 civil war.

Mohanad Hage Ali, a fellow at the Carnegie Middle East Center, said the security situation was approaching a breaking point. “This is a country with a history of violence, and I see this crisis on auto-pilot without anyone in charge,” he said.

Western governments have been piling pressure on Lebanese politicians to form a government that can set about reforming the corrupt state, threatening sanctions and saying financial support will not flow before reforms begin.

But barring a dramatic shift in the political landscape, politicians and analysts say it now seems very difficult for a government to be formed before parliamentary elections next year.

The most influential Sunni politician in Lebanon, Hariri is backed by Lebanon’s Sunni religious establishment and, while his support from Sunni led-Saudi Arabia waned in recent years, he is still backed by other Sunni Arab-led states, including Egypt.

Following the announcement, the Lebanese currency weakened further on the parallel market, where dollars changed hands at more than 20,000 pounds, compared to around 19,000 earlier this morning, a dealer said.