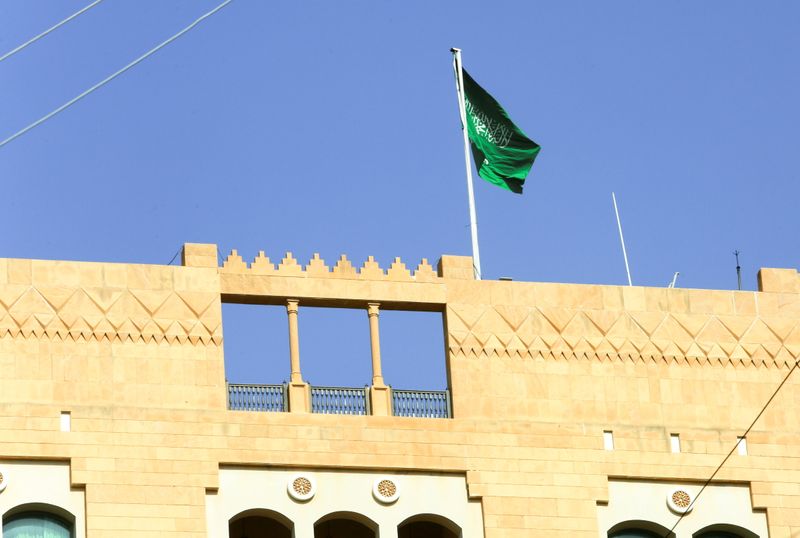 By Timour Azhari and Laila Bassam

BEIRUT (Reuters) – Lebanon’s government cannot afford to resign over a growing diplomatic crisis with Saudi Arabia and some Gulf states, a member of a Lebanese crisis group of ministers said on Saturday following a near three-hour meeting over the widening rift.

“The country cannot be left without a government,” due to other pressing matters, and would continue to work to resolve the rift, Education Minister Abbas Halabi said after the meeting.

The row over critical comments made by Lebanese Information Minister George Kordahi about the Saudi-led military intervention in Yemen had spurred calls by some top politicians for Kordahi’s resignation, while others opposed the move.

But Foreign Minister Abdallah Bou Habib said Mikati’s contacts with officials from a number of states showed opposition to the resignation of the government, formed only last month after a 13-month stalemate.

“They told Mikati, ‘if you are thinking about resignation, take that out of your head,’” he said.

Richard Michaels, deputy head of the U.S. mission in Lebanon, had joined the crisis meeting in Beirut, a U.S. Embassy spokesperson said, declining to comment further.

Mikati had asked Kordahi on Friday to consider Lebanon’s “national interests” but stopped short of asking for his resignation.

Kordahi has been publicly backed by the Iran-backed Hezbollah armed group and has declined to apologise or resign over the comments, which have dealt the worst blow to Saudi-Lebanese relations since Saad al-Hariri’s 2017 detention in Riyadh.

The minister’s political patron, Suleiman Frangieh of the Hezbollah-allied Marada Movement, told a news conference he had refused an offer by Kordahi to resign and would not name a successor to him should he do so.

Yet a group of former Lebanese prime ministers called on Saturday for Kordahi to resign, saying his comments had inflicted a strong blow to relations with Gulf Arab nations.

If Kordahi resigns, ministers backed by Hezbollah and its Amal ally could follow suit at a time when the government is already paralysed by a dispute over an inquiry into the August 2020 explosion that devastated parts of Beirut.

A senior political source told Reuters that the United States and European nations were in contact with Lebanese officials to prevent the government from falling and there were no immediate indications any ministers would resign.

The row comes as Lebanon struggles with a financial crisis dubbed by the World Bank as one of the worst in modern history.

Mikati has been hoping to improve ties with Gulf Arab states strained for years because of the influence wielded in Beirut by the Iran-backed Hezbollah.

Saudi Arabia had already in April banned all fruit and vegetable imports from Lebanon, blaming an increase in drug smuggling that it said Lebanon had failed to address, a ban now extended to all goods.

The Arab League said in a statement on Saturday it was concerned about the souring of Lebanese-Gulf relations and appealed to Gulf countries “to reflect on the measures proposed to be taken … in order to avoid further negative effects on the collapsing Lebanese economy”.