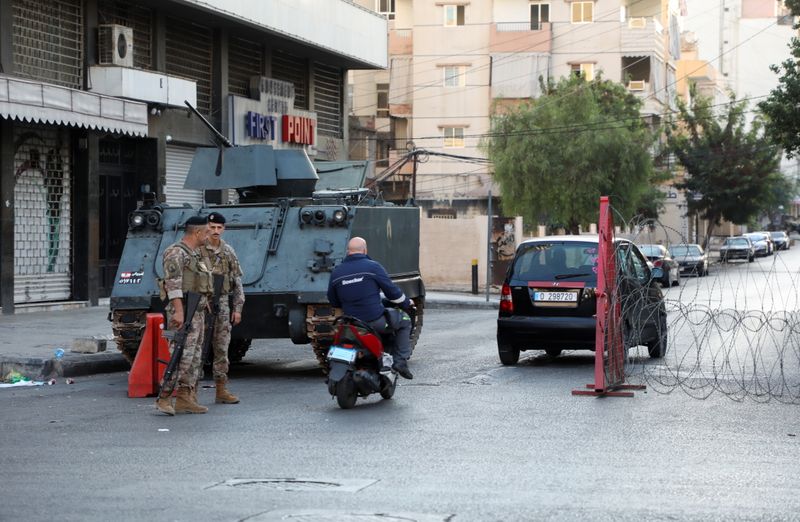 FILE PHOTO: Army soldiers stand guard at a checkpoint a day after gunfire erupted in an attack on protesters who were heading for a demonstration called by Hezbollah to demand the removal of the judge investigating last year’s port explosion, in Beirut, Lebanon October 15, 2021. REUTERS/Mohamed Azakir

Geagea, who was due to appear shortly on a local television show, did not immediately respond to a request for comment.

An LF spokesperson said Geagea had so far not been informed of any court request to give a statement.

The bloodshed, in which seven Shi’ites were killed, was the worst Lebanon had seen in over a decade and the Iran-backed Shi’ite Hezbollah group has accused the Christian Lebanese Forces of being responsible for it, a charge denied by Geagea.

Th event, which last several hours and stirred memories of the 1975-1990 civil war, added to fears for the stability of a country that is awash with weapons and suffering an economic meltdown.

The gunfire started as protesters were on their way to a demonstration called for by Hezbollah and its Shi’ite ally Amal against the lead investigator of the deadly Beirut port blast probe.

The LF blamed the violence on Hezbollah “incitement” against the judge and accused the group of sending its supporters into the Christian neighbourhood of Ain al-Remmaneh where it says four residents were wounded before a shot was fired.

Hezbollah’s chief Sayyed Hassan Nasrallah made a scathing verbal attack on Geagea and his party in a televised speech on Monday and accused the group of trying to drag the country into civil war.

Geagea’s upcoming comments in Thursday’s interview to the local MTV channel show will be the first since Nasrallah’s speech.