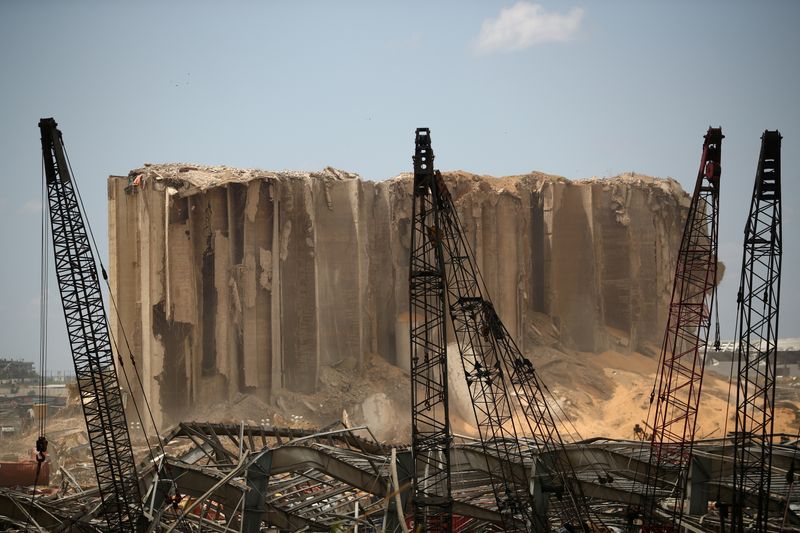 FILE PHOTO: Debris are seen in the port area after a blast in Beirut, Lebanon, August 10, 2020. REUTERS/Hannah McKay

BEIRUT (Reuters) -The leader of Lebanon’s largest Christian bloc, the Free Patriotic movement (FPM), said on Saturday the investigation into last year’s deadly blast at Beirut’s port should not be stopped.

Gebran Bassil’s stance is in contrast to that of the Iran-backed Shi’ite Hezbollah group, an FPM ally that opposes the investigation and has called for its lead investigator to be removed.

Bassil was speaking two days after a spasm of violence that erupted over the inquiry. Seven Shi’ite Muslims were killed as crowds were on their way to a protest against Judge Tarek Bitar in a demonstration called for by Hezbollah and its Shi’ite ally Amal.

“The Free Patriotic movement is with (for) continuing the probe, revealing the truth and putting those responsible on trial,” Gebran Bassil said in a speech.

Bassil, who is President Michel Aoun’s son-in-law, was hit with U.S. sanctions last year for alleged corruption and his ties to Hezbollah. Bassil has denied the allegations.

Hezbollah’s leader Sayyed Hassan Nasrallah has said the investigation is biased and politicised.

Thursday’s street violence was the worst in over a decade and stirred memories of the country’s ruinous 1975-90 civil war.

Defence minister Maurice Selim said a stampede and a clash in Teyouneh led to gunfire by both sides, adding that the exchange of fire had preceded the sniper fire.

On Thursday, the army initially said rounds were fired on at protesters as they passed through the Teyouneh traffic circle dividing Christian and Shi’ite Muslim neighbourhoods. It then later said there had been an “altercation and exchange of fire” as protesters were on their way to the demonstration.

The investigation into the Aug. 4, 2020 explosion, which killed more than 200 people and devastated swathes of Beirut, has made little headway following a smear campaign against Bitar and pushback from powerful political factions.

Lebanese Justice Minister Henry Khoury said earlier on Saturday he stood by Bitar and that the judge had the right to summon whoever he wants in the case, Al Jadeed television reported.

Khoury also said he had not been asked to suggest appointing a new judge to handle the investigation.

“I stand by the…investigator,” Khoury was quoted as saying. The minister added said he did not have the authority to replace Bitar and that he faced no pressure to do so.

Lebanon’s higher judicial council is meeting Bitar on Tuesday to hear his views on how the investigation is proceeding, judicial sources said.

Thursday’s violence has added to concerns for the stability https://www.reuters.com/article/us-lebanon-crisis-blast-crisis-explainer/explainer-why-is-lebanon-such-a-mess-idUSKBN2H42HJ of a country that is awash with weapons and grappling with an economic meltdown.

Hezbollah blamed the Christian Lebanese Forces party for the deaths, an accusation the head of that party, Samir Geagea, denied.