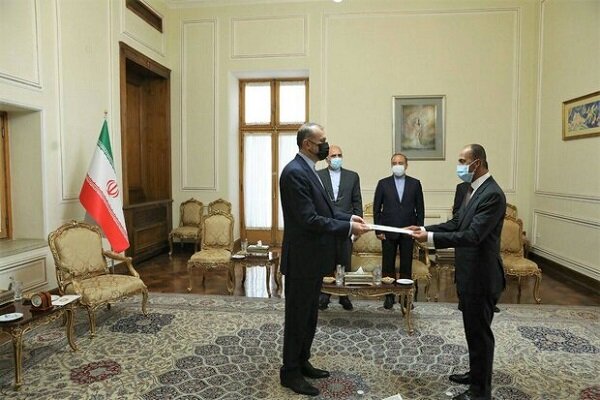 On Thursday, the Iranian foreign minister had many meetings but only one drew the attention of observers: the meeting during which the new Kuwaiti ambassador to Iran, Badr Abdullah al-Munikh, submitted a copy of his credentials to Hossein Amir-Abdollahian at the beginning of his tenure.

Al-Munaikh is the first Kuwaiti ambassador to Tehran after six years. He is considered one of the prominent diplomats in the Kuwaiti Ministry of Foreign Affairs and served in his country’s embassies in London and Pretoria. He also served as the deputy ambassador of Kuwait to the United Nations at the time when the tiny, oil-rich Arab country was a non-permanent member of the UN Security Council between 2018-2019.

Kuwait downgraded its diplomatic relations with Iran in 2016 in solidarity with Saudi Arabia over the storming of the Saudi diplomatic missions in Iran in the wake of the Saudi execution of a prominent Shiite cleric. Since then, Kuwait has not had an ambassador in Tehran.

But the ongoing negotiations between Tehran and Saudi Arabia, which started last year in April, seem to have motivated Kuwait and other fellow Arab countries to enhance ties with Iran. Kuwait is known for its moderate foreign policy toward Iran despite the fact that it often seeks to coordinate its Iran policy with Saudi Arabia. Kuwait seems to have gotten the green light from Saudi Arabia to dispatch an envoy to Iran.

Further reinforcing this extrapolation is concurrent with a decision by the UAE to dispatch an ambassador to Iran. A senior Emirati official said last month that the UAE was working to send an ambassador to Iran as it sought to rebuild ties with Tehran after years of tensions.

The Kuwaiti move comes amid Iranian-Saudi negotiations hosted by Iraq to restore ties with Tehran. After more than a year of painstaking and security-oriented talks, Iran and Saudi Arabia appear to be on the verge of making a breakthrough that could end years of diplomatic boycott.

In late July, Iran accepted an offer by Saudi Arabian Crown Prince Mohammad bin Salman for Iraq to hold a public meeting of the Iranian and Saudi foreign ministers, an indication that the countries were moving the talks to the political level.

The Baghdad talks began in April 2021 and continued intermittently since then. After five rounds of talks, the Saudi crown prince sent a message via the Iraqi foreign minister requesting that Iraq host a meeting between the foreign ministers of Iran and Saudi Arabia.

“Five meetings were held between Saudi Arabia and Iran on the security level,” Iraqi Foreign Minister, Fuad Hussein, told Rudaw in July. “The Saudi crown prince asked us to host the meeting of the Saudi foreign minister with his Iranian counterpart in Baghdad.”

Since July nothing has taken place in the negotiations. But the return of the Kuwaiti ambassador to Iran could well indicate a Saudi tendency to patch up ties with Iran.

Arab media has said the sending of an ambassador to Iran by Kuwait is indicative of “a new orientation” by the Persian Gulf Arab states toward Iran.

The New Gulf news website has said upgrading Iran-Kuwait relations is part of this orientation.