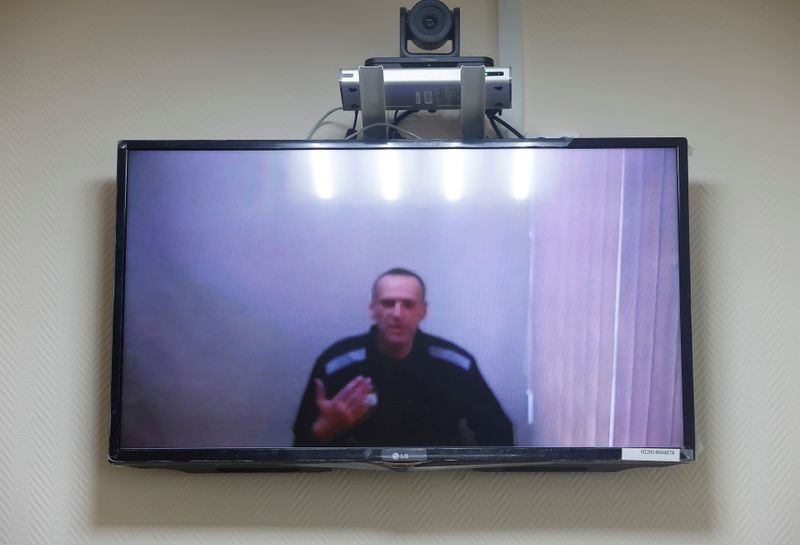 FILE PHOTO: Russian opposition leader Alexei Navalny is seen on a screen via a video link during a hearing to consider his lawsuits against the penal colony over detention conditions there, at the Petushki district court in Petushki, Russia May 26, 2021. REUTERS/Maxim Shemetov

Navalny, 45, who was poisoned in August 2020 by what Western nations said was a nerve agent, is serving a 2-1/2-year sentence for parole violations he calls trumped up. The EU has imposed sanctions on Russian officials over Navalny’s poisoning and imprisonment.

“He has fought tirelessly against the corruption of Vladimir Putin’s regime. This cost him his liberty and nearly his life. Today’s prize recognises his immense bravery and we reiterate our call for his immediate release,” the European Parliament said on Twitter, announcing Navalny as the winner.

Moscow denies any wrongdoing and accuses the EU of interfering in its domestic affairs. It has also denied Western accusations that Navalny was jailed for his political activities and said he was punished for breaking the law.

“I think it’s an important recognition of the important role he has played for many years in supporting democratic values and being a strong voice in Russia,” Stoltenberg told a news conference in Brussels, calling for his release.

Navalny’s team wrote on the messaging app Telegram: “Putin calls Navalny a criminal blogger, but he is alone in this. Alexei Navalny is a politician who fights for justice despite all the threats and assassination attempts.”

“And we are certain that Putin is not pleased to hear about this,” the team said.

Navalny said on Oct. 11 that a prison commission had designated him an extremist and a terrorist, which he denies.

Navalny’s movement suffered an earlier blow in June when a court ruled its activities to be extremist. Many of his allies have had their homes raided or their freedom of movement restricted, and some have fled abroad. Last month Russia opened a new criminal case against Navalny that could keep him in jail for a further decade.