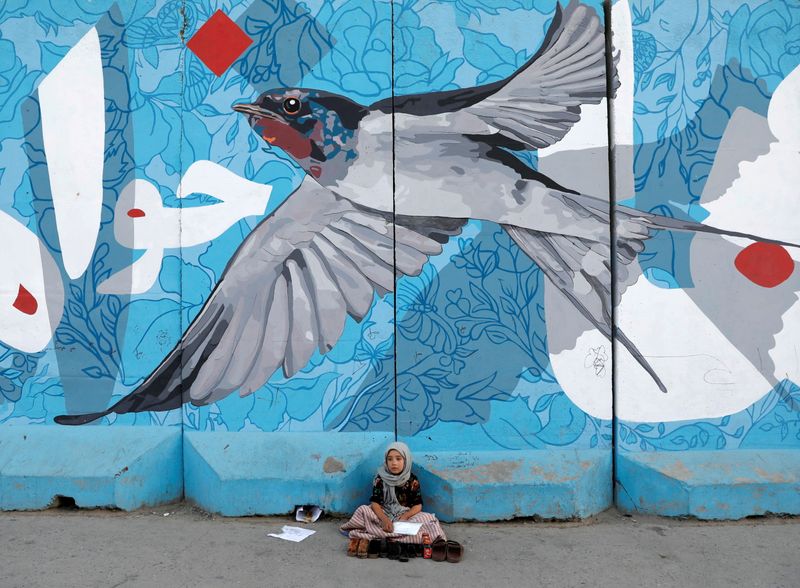 FILE PHOTO: A shoe polishing girl waits for customers under graffiti on a wall in Kabul, Afghanistan June 24, 2021. REUTERS/Stringer/File Photo

(Reuters) – American troops pulled out of their main military base in Afghanistan on Friday, a U.S. defence official said, under an agreement with the Taliban allowing for the withdrawal of all U.S. forces from the country, to end their longest war.

The U.S. military has coordinated its air war and logistical support for its Afghan mission from the Bagram air base, about 60 km (40 miles) north of Kabul, and the withdrawal of forces from the base symbolises the end of the U.S. military involvement in the country.

The following is a chronology of U.S. involvement and major developments in Afghanistan over the past two decades:

Sept 11, 2001 – U.S. involvement in Afghanistan is triggered by attacks on the United States plotted in Afghanistan by the al Qaeda militant group, led by Osama bin Laden, who was in Afghanistan under Taliban protection.

December 2001 – U.S. forces bomb the Tora Bora cave complex in eastern Afghanistan where bin Laden is reportedly hiding but he slips over the border into Pakistan, where he disappears.

May 2, 2003 – U.S. officials declare an end to major combat operations in Afghanistan. Under President George W. Bush, the U.S. focus turn to preparing for the invasion of Iraq, which required a diversion of U.S. troops, equipment, and intelligence collection from Afghanistan. This allows the Taliban to slowly regroup, at first in the south and east.

Feb 17, 2009 – President Barack Obama, in his first major military decision as commander-in-chief, orders 17,000 more combat troops to Afghanistan to tackle an intensifying insurgency. The 17,000 reinforce 38,000 U.S. troops and 32,000 from some 40 NATO allies already in Afghanistan.

May 1, 2011 – Bin Laden is killed in a raid by U.S. forces in Pakistan. At about the same time, the number of U.S. forces in Afghanistan peaks at about 100,000 as part of a surge that saw intensified CIA drone attacks on Taliban and other militants in Pakistan.

December 2011 – U.S. officials say U.S. diplomats have held about half a dozen secret meetings with Afghan Taliban contacts over the previous 10 months, mostly in Germany and Qatar.

Dec 28, 2014 – The U.S. combat mission is officially concluded after the withdrawal of most combat troops and an transition to an “Afghan-led” war. Nearly 10,000 U.S. troops remain, with a focus on training Afghan forces and counter-terrorism.

Aug 21, 2017 – U.S. President Donald Trump announces his strategy, calling for an open-ended deployment of U.S. forces with the goal of forcing the Taliban to negotiate peace with the Kabul government.

Feb 29, 2020 – The United States signs a troop withdrawal agreement with the Taliban in Doha that envisages peace talks between the Afghan government and the insurgent group.

April 14, 2021 – U.S. President Joe Biden announces U.S. forces will stay beyond the May deadline envisaged by the U.S.-Taliban deal but will withdraw unconditionally by Sept. 11.

June 26, 2021 – Biden meets Afghan President Ashraf Ghani at the White House. He calls on Afghans to decide their own future while vowing to continue security aid.

(Reporting by Kabul and Washington bureaus; Writing by Robert Birsel and Charlotte Greenfield)